Upon Erdoğan's saying “Let them go” regarding the increase number of doctors who are leaving Turkey to work overseas, widespread responses given to him including those from organizations of health professionals and also imprisoned politician Selanattin Demirtaş.

Doctors in Turkey have been protesting the overworking hours, and their demands and actions have been rising with repeated labour strikes in recent months. Following another call for a strike by the doctors on 14-15th March, underlining that many doctors are migrating to work abroad, Turkish President Recep Tayyip Erdoğan responded, “Let them go”.

There were widespread responses to his statement, including those from organizations of health professionals throughout Turkey and former People’s Democratic Party (HDP) Co-Chair, imprisoned Kurdish politician Selahattin Demirtaş.

Another call from the doctors

In fact, the fighting has started long ago. The decision to stop work was declared by many organizations of doctors and also other health professionals, and first of all by the Turkish Medical Association (TTB) on 15th of December last year, on 8th of February this year for one day and then on 17-18 of February for two days.

The doctors again declared that they would stop work except for emergency services on 14-15th March if their demands were not met. The doctors’ demands are very clear and just, and in previous months they were quite angry that the wage increases in the proposed budget were then withdrawn.

Turkish Medical Association (TTB) has announced that the number of doctors applying to go abroad has increased many times more compared to former years.

Erdoğan responded saying: “I will talk frankly: Let them go.”

Organizations of health professionals reacted to his words throughout Turkey.

One criticism came from the southern province of Turkey, Mersin. Mersin Medical Association and Union of Social Service Employees (SES) made a joint declaration yesterday(9th of March), and the doctors declared that they would not be going anywhere. Talking on their behalf, the chairman of the Association, Mehmet Antmen, said:

“First of all we would like to tell that this statement by the President is a clear sign of the crisis of not being able to govern.”

“Who are to go are not the doctors”

Antmen explained the meaning of Erdoğan’s words as follows:

“This statement towards the doctors who are exposing the health system commercialized by the government, the hospitals that are producing unhealthiness, the demand for health services which they have provoked and which they are not able to meet now, physical examination in five minutes that is being imposed at the moment, the increasing cases of violence against health professionals, towards the doctors who are intensifying the struggle with their ‘white actions’ is in fact an admission of failure.” Antmen continues:

“This statement ignoring our urgent demands in health services, targeting our demand for decent wages is an attempt to mislead the society and to try to show the doctors to the public as if they are only asking for more money and to draw a veil over the crises in the health sector.”

The banner in front of the desk in the press conference in Mersin was also read: “Who are to go are not the doctors.” 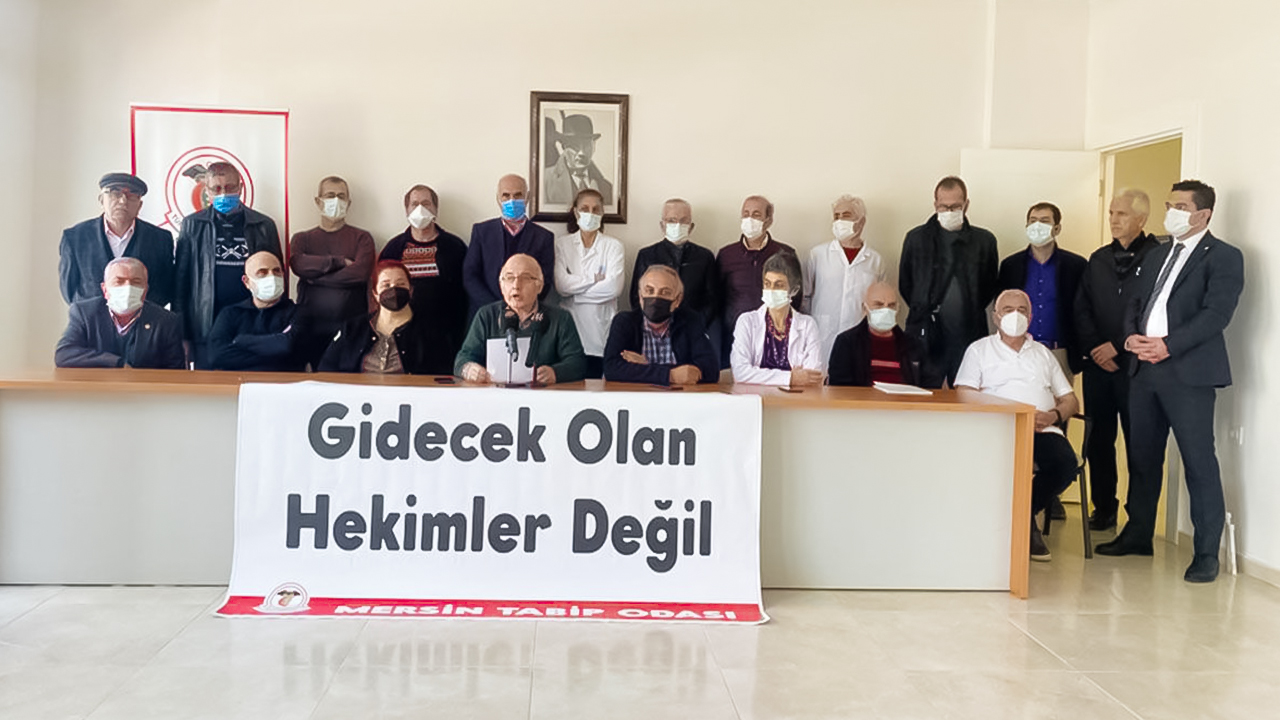 Ex HDP Co-Chair Selahattin Demirtaş also responded to Erdoğan’s words from behind bars and addressed the doctors saying: “You should not go, we should send those who must go all together in the election.”

Daily newspaper Sözcü has reported on the increasing numbers of doctors migrating abroad using the figures of the Turkish Medical Association. According to these figures the number of doctors requesting a certificate of registry in order to migrate and to work abroad was only 59 in 2012; but it has increased each year and reached 1405 last year in 2021.