Enforced disappearances are on the rise in Turkey

In Turkey, there has been an increase in abductions and enforced disappearance cases since 2016. More than 30 people have been abducted and/or are still missing. These recent enforced disappearances in the country are closely related to the transforming, increasing and deepening paramilitarisation after 2015. 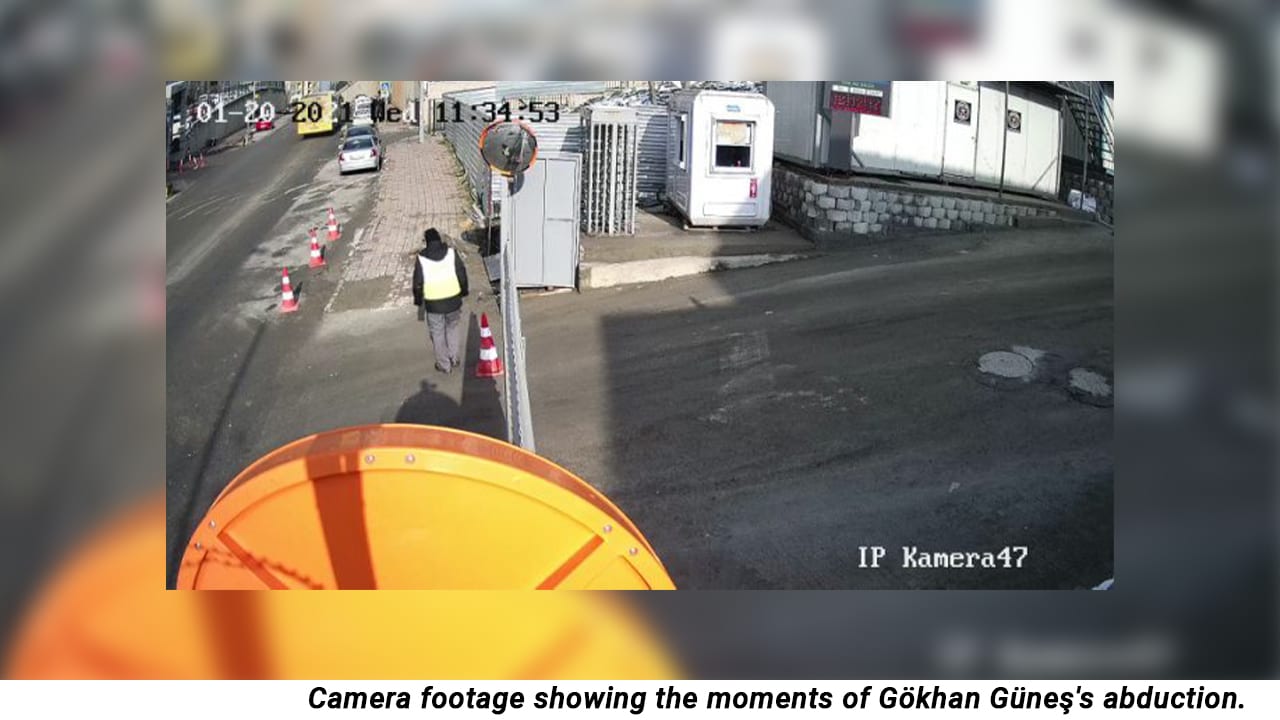 Gökhan Güneş, an ordinary worker and socialist activist, was abducted and forced into a car on his way to work in Başakşehir, Istanbul on January 20. The camera footage of those moments were revealed thanks to the diligent detective work done by the family and friends of Güneş. Accordingly, widespread public awareness about the abduction was urgently built with pressure being put on the authorities to act.

And so Güneş was then left on the side of the road in Başakşehir, blindfolded, on January 26, at around 6 a.m, six days after his abduction.

Güneş, who had been tortured for six days in an unknown place by being electrified, sprayed with cold water, beaten, and threatened with rape, announced at a press conference at the Human Rights Association (IHD) building that the people who tortured him referred to themselves as ‘the invisibles’.

Although Güneş was able to be found as a result of his family and friends’ well organised efforts, there are still many people who have been abducted or disappeared in recent years in Turkey that have still not been found. The People’s Democratic Party (HDP) Kocaeli MP Ömer Faruk Gergerlioğlu states that since the state of emergency (OHAL) that was declared after the coup attempt on 15 July 2016, the number of abducted, tortured and enforced disappeared cases to date is at least 32.

Yusuf Bilge Tunç, former employee of the Ministry of Industry, has been missing since August 6, 2019. It is not known whether Tunç is alive or dead.

Mehmet Bal, who came to Istanbul from Batman to visit his son in prison, has been missing since January 24, 2020. There has been no investigation into Bal’s disappearance.

In Dersim, Munzur University student Gülistan Doku has been missing since January 5, 2020, and there is no serious investigation about this missing person.

Hurmüz Diril, father of Remzi Diril, the priest of the Istanbul Chaldean Church, has been missing since January 11, 2020. The body of his wife, Şimoni Diril, who disappeared on the same date, was found on the 70th day of her disappearance.

Hüseyin Galip Küçüközyiğit, former prime ministry employee who was dismissed by a decree law, was also abducted in Ankara on 29 December, 2020. Although the family applied to prosecution, the prosecutor did not conduct an investigation. However, his family found workplace video footage, and it was understood that Küçüközyiğit was followed by three people and later disappeared. 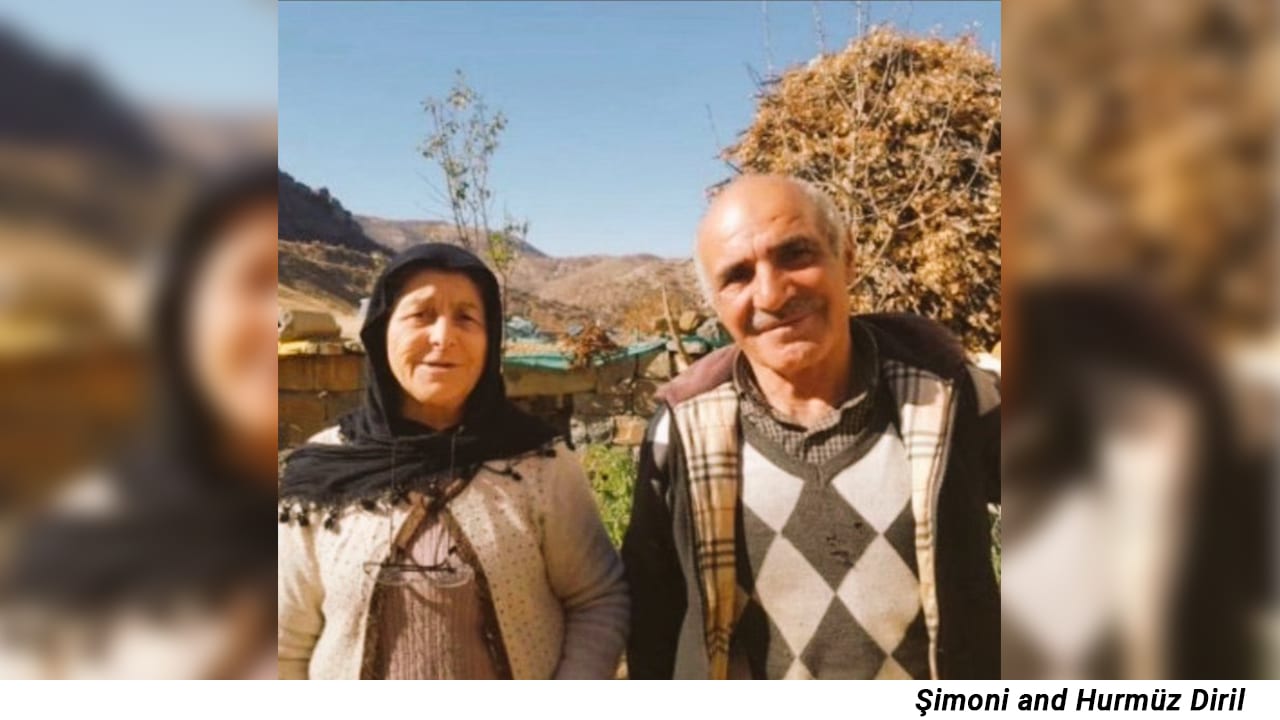 Yoleri underlined that the real number may in fact be higher than the numbers announced. Although some families apply to the IHD regarding the disappearances, they may not want it to be released to the public because they are afraid, so some cases cannot be shown in the statistics.

The Government is Silent

People’s Democratic Party (HDP) MP, Faruk Gergerlioğlu underlined in a press statement that no research or investigation has been conducted about these cases and that the ministries responsible have not responded to the questions regarding the cases.

The fact that the ministry has not made a single statement about Gökhan Güneş, whose abduction footage was revealed, who was not heard of for 6 days, and was thrown onto the roadside after being tortured for days, is extraordinary and confirms what Gergerlioğlu said.

There is only one statement made by Vice President Fuat Oktay in November of last year that “there is no human abductions in Turkey” he said regarding the persistent questions of HDP MPs. However, there are two cases that happened even after Oktay’s statement; the abductions of Küçüközyiğit, who is still missing, and Güneş, who was found 6 days after his disappearance.

Enforced disappearances on the increase as paramilitarisation increases

These recent missing cases have echos of the recent and distant past of Turkey’s enforced disappearances, and there are similarities with the relationship of these disappearances and to increasing paramilitarisation in the country.

In Turkey, the history of enforced disappearance of people dates back to the early years of the Republic. However, this crime was widespread in the 1990s.

The Memory Centre, an association founded in 2011, which aims to reveal the facts of serious human rights violations and focuses on enforced disappearances, states that the total number of people forcibly disappeared since the military coup of September 12, 1980 is 1,352. However, the association also admits that the exact number is unknown.

According to this uncertain data, the number of forcibly disappeared people increased from 108 in 1993 to 532 in 1994. The cities with the highest number of forcibly disappeared cases were as follows: Diyarbakır, Şırnak, Mardin, Hakkari, Batman, Dersim, Bitlis, İstanbul, Adana and Urfa. All but Istanbul, Kurdish cities. (Editor’s note: However, Istanbul holds the largest population of Kurds of any city.) 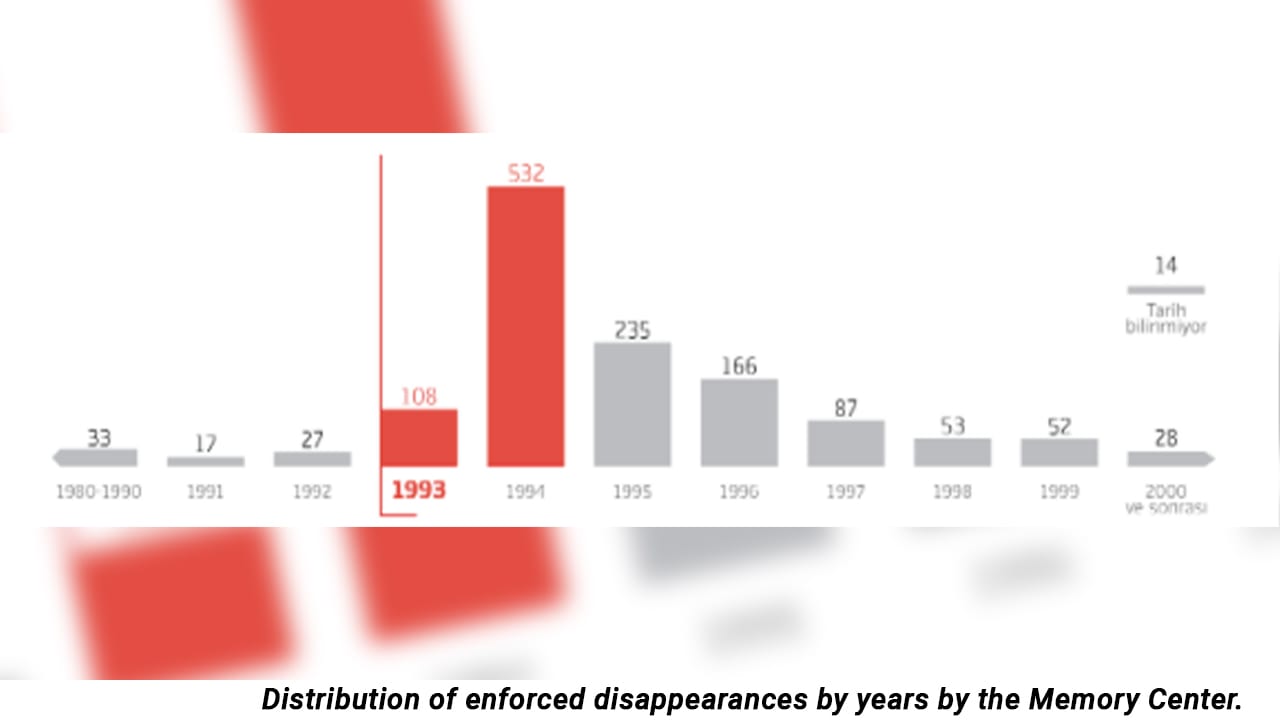 Academics Ayhan Işık, who wrote his PhD Thesis on the formation, functions and transformation of Paramilitarism in Turkey, penned an article series entitled “A brief history of paramilitarism in Turkey” for Bianet. In this article, he states that the Turkish state started to form paramilitary groups after 1984, when the PKK was established.

Some of these groups are: The Village Guards, which was established in 1985 and still exist. Special Team formed within the Police Department. JİTEM, which was created in 1987, and the radical Islamist structure called Hizbullah, which was also active in the 90s.

It is understood from the statements of the ‘confessors’ (people who took part in disapperances and torture) and army members who spoke on this subject that is was especially the Gendarmerie Intelligence and Counterterrorism Units, known as JITEM, that was the main actor in enforced disappearances as a paramilitary group.

So, is the increase in the number of missing cases today a sign that we are in a new paramilitarisation process? Yoleri answered,“We know this is encouraged. Individual armament is encouraged. There is an issue of missing weapons after the coup attempt on 15 July 2016; it is not clear what happened to the weapons belonging to the army.”

Stating that in almost all of the recent abductions, perpetrators answered the question of “who are you?” as “I am intelligence”, “I am the state” or “I am invisible”, Yoleri drew attention to the MIT (National Intelligence Organisation) law. 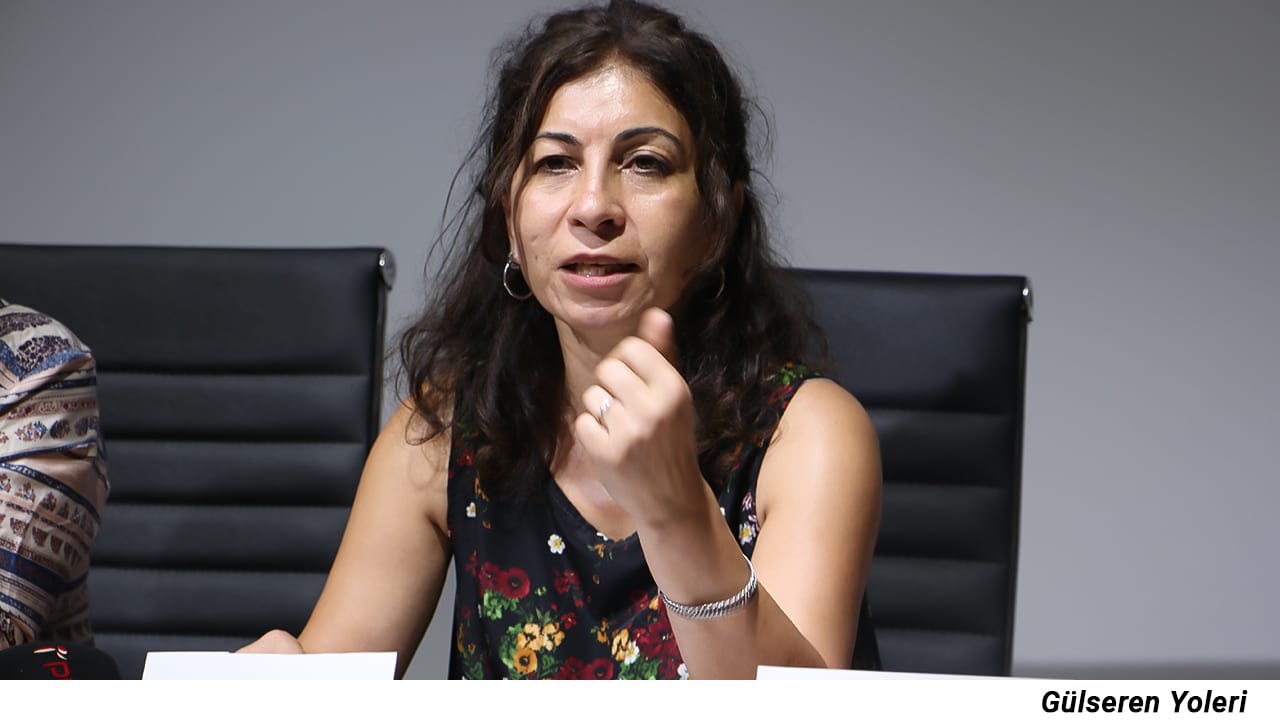 Serious changes have been made to this law. The first important change was made in 2014, and in 2017-18, there are changes, especially through the decree laws. Legal immunity has been provided to MIT members with extreme powers. It is not possible for a prosecutor to investigate any MIT action because the prosecutor will be legally blocked. That’s why we are going through a very dangerous process. It is difficult to even report on this, because identifying the MIT members is also a crime.”

Saying that it is not known exactly what kind of paramilitary structuring is being made today, Yoleri states, “The MIT can do whatever it wants to anyone it wants by violating legal structures. In such an environment, anything can happen to anyone, and it is almost impossible to reveal the truth. I think there is a great danger, a huge area of violations has emerged in terms of human rights”, and she adds, “We are following the developments with deep concern.”

What makes today different from the ‘90s? Yoleri states that everything that was done in the ‘90s was covered up. “In the 1990s, there was an irregular process, but there was an effort to find a way to make it look legal. Today, there is unlawfulness. A number of illegal practices and approaches have gained legal grounds in this process. In other words, we are not going back to the 90s, we are going through a much worse period than the 1990s,” she said.

Yoleri underlines that the 1990s seemed worse when looked through the numerical data, but when the incidents of today are compared with those times, a similar pattern may be observed. “Today we are experiencing these cases in different dimensions. Today’s cases should be perceived as an initiative. We can come to the place where people will be found dead. The groundwork for these deaths are being laid out now,” she said. 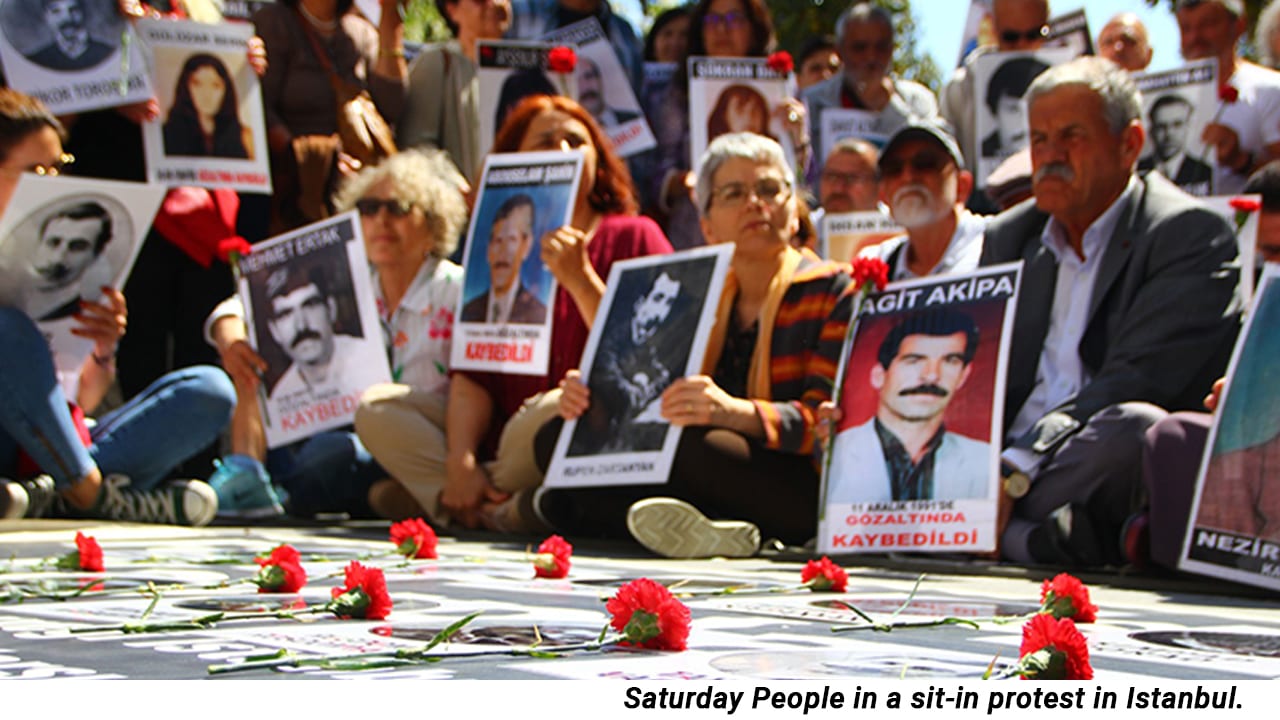 ‘The violations of human rights has spread’

“By 1995, this reflex had actually saved a very significant part of such cases, otherwise more people could have been forcibly disappeared,” said Yoleri.

The IHD, founded by human rights defenders in 1986, is an association that has been struggling for human rights ever since. Drawing attention to this long history of struggle of the IHD, Yoleri said,“We have seen that if there is a violation of rights somewhere and if no measures are taken, that violation of rights becomes widespread and general, and begins to spread to everyone.”

Therefore, she underlines the importance of international solidarity which is the second stage of the struggle. “We have seen over time that as the world becomes global, violations of rights in one country begin to occur in other countries. What is considered normal in one country is starting to happen in other countries. When you normalise these kinds of things anywhere, it actually gets closer to you,” she said.

“Therefore, it should not be evaluated as ‘how far Turkey is away from us’. Both evil and violations of rights are becoming global today. That is why it is necessary to look at the importance of awareness and international solidarity.”