Emine Çağırga: Every time I open my fridge I think of Cemile

Ten-year-old Cemile Çağırga was killed during the first nine-day curfew announced in Cizre in Şırnak (Şirnex). Her lifeless body was kept in a refrigerator for two days. Her mother Emine says, “Every time I open the fridge, I think of my daughter.”

Selman was killed in the Nur neighbourhood. His father Mehmet Ağar said that they had moved from Kırkkoyun (Deşta Lala) village in the foothills of Mount Gabar having been pressurised to join the state-sponsored paramilitaries known as ‘Village Guards’ (korucu) in the 1990s. As the Ağar family refused to work as village guards, they were forced to leave their home, and they migrated to Cizre.

“My son was sitting on an oilcan outside our house in the Nur neighbourhood during the curfew when he was shot and killed by snipers,” says Selman’s father Mehmet Ağar, describing the moment that his son was murdered. 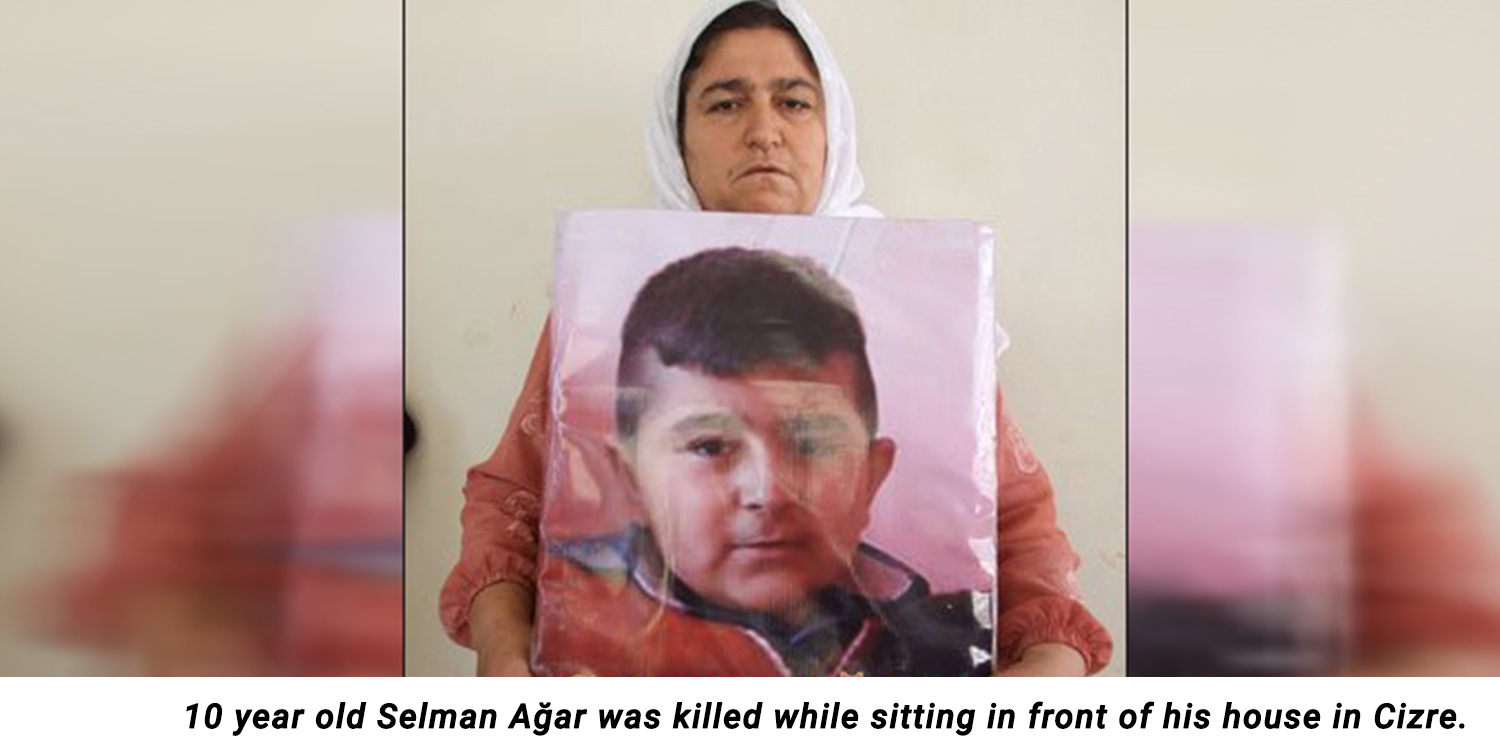 Ağar says that his son was shot and killed after the evening call to prayer, and his body was taken to Şırnak. He is angry that there has been no progress in the legal process of the case in six years.

“I said in the statement I gave that he had been shot by snipers. It is clear what happened to us. We shall pursue the case to the end. They denounced everyone who died, including ten-year-olds and even a baby, as terrorists. They even killed animals. May Allah grant us patience.”

Cemile’s father Ramazan Çağırga lost seven members of his family including two sisters when his house in the Cudi neighbourhood was hit by a mortar. Now, 23 years later, he relates his experiences during the nine-day curfew in which his daughter was shot and killed by a sniper. “They were firing with heavy weapons. They had cut off the water and electricity. There were snipers on the high buildings. My daughter Cemile and our other children were outside the door. My daughter was killed in the shooting. My daughter died, and we brought her into the house. We brought Cemile’s lifeless body in and washed her, we put ceremonial henna on her hands.”

Çağırga recalls that the ambulance they called was not allowed into the neighbourhood because of the curfew, saying, “We got a freezer and put her body into the freezer. After we had kept her body in the freezer for two days we were told to bring her to the Idil Road. When we took her there they fired at us. Later a representative and someone else handed her to the ambulance.”

Çağırga relates his experiences as if they were yesterday. He said they would never give up on the case and they would persist in their legal struggle until those responsible were exposed. He said, “It doesn’t matter how justified we are, they put it out that we are not. We have seen that Turkey does not accept anyone whose name is Kurdish, whose language is Kurdish. How can we remain silent in the face of this oppression, this injustice, this abuse?” 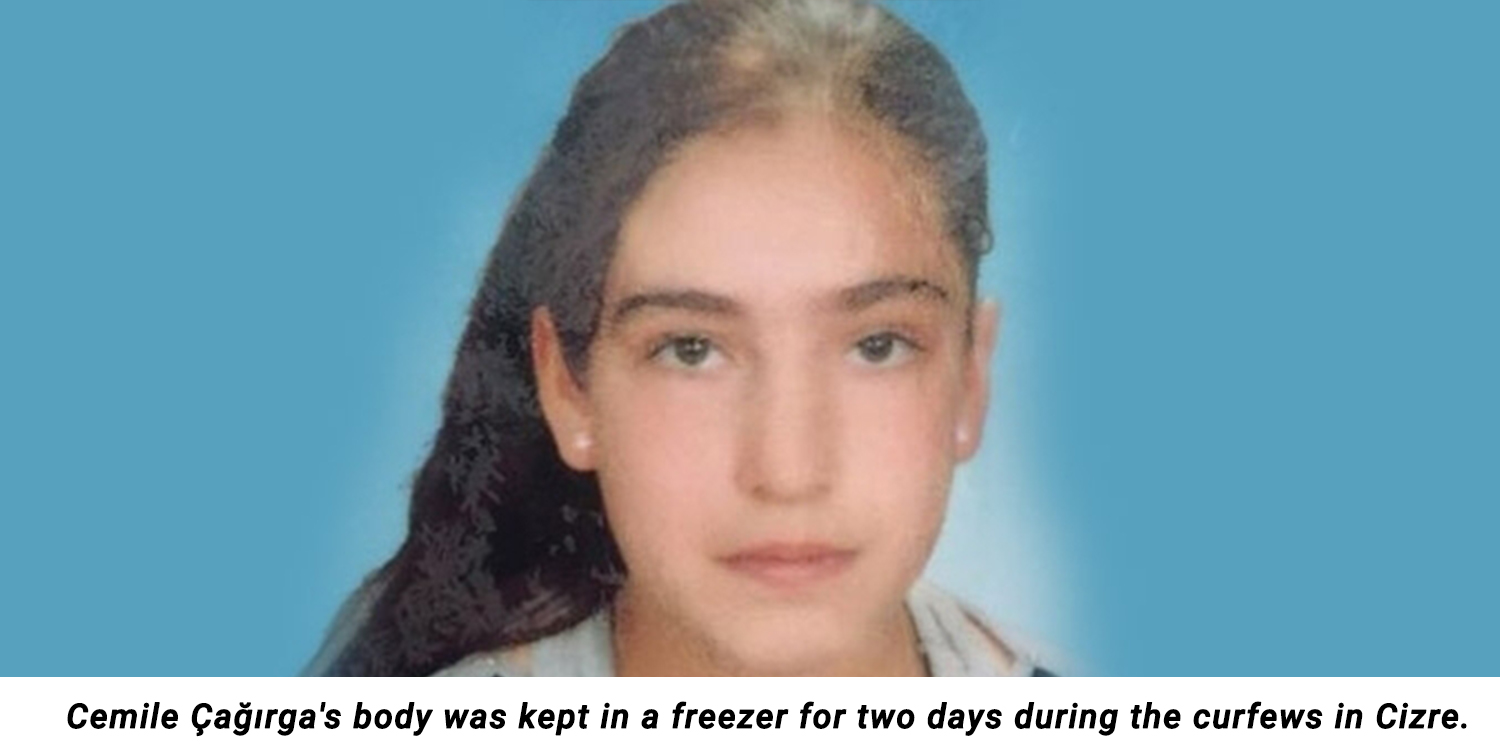 Cemile’s mother Emine describes her daughter, whom she calls ‘Cizir’ (pronounced Jizir), with tears in her eyes. “I called out to Cizir three times when she was shot. She made no sound. Her last words were, ‘Oh! Mummy!’ ” She describes how they put henna on her daughter’s hands and hair after she was shot, because she had loved henna. She says they had called an ambulance after Cemile’s death but that the ambulance service had said they would not be able to come on security grounds. She continues: “We put Cizir’s body in the fridge so it would not smell. Since that day every time we open the fridge we relive that same pain over and over.”

Emine ended by saying: “Nothing has been good for us for six years. Persecution and torture goes on and on. We want peace to come now. We want people’s hearts to stop bleeding now. There is nothing better than peace and brotherhood. We will not give up on Cemile’s case until we die.”

Two hundred and eighty-eight people were killed during the curfews declared on 14 December 2015, which ran until 2 March 2016, in the Cizre district of Şırnak in Turkey. Dozens of apartments, school buildings, and parks were destroyed in attacks by the Turkish army. Six years have passed since 177 people were killed while taking shelter in the basements of buildings under fire. No justice has yet been achieved for the victims. The cases of 21 people who died in the curfews announced from 4-12 September in Cizre are pending with decisions either of “lack of jurisdiction” or of “permanent search warrant”.

Some of the cases with lack of jurisdiction decisions of have been appealed at the Constitutional Court, and of the 21 cases, inquiries are continuing into only one. Not a single person has been tried in six years.