Decline of Armenian stone sculpture in Urfa: ‘There is no respect for artisans anymore’

Ahmet Usta is the last of a generation of stonemasons, expert in the art of shaping stones inherited from his Armenian ancestors, a skill that is now sadly becoming extinct.

Ahmet Usta, 61, has been mastering the art of shaping the famous basalt stones of southeastern Urfa (Riha) for 45 years. He did not learn through formal education, but inherited it as a tradition from his ancestors and from Armenian former inhabitants of Urfa.

“My father met a Armenian rock-art master when he was young. Master Yani, was his name. Master Yani saw my father watching the creation of his art and insisted he come work for his atelier,” Usta said in an interview with Mesopotamia Agency. “According to my father’s story, there were three prominent Armenian masters in Urfa back then: Egop, Yani and Moho. These masters taught 55 people, including my father, how to sculpt stones. My father used to say that he was to first one to inherit this art from Armenian masters.”

When Yani’s home was left deserted and plundered over the years, Usta witnessed the painful destruction of his master’s traces. 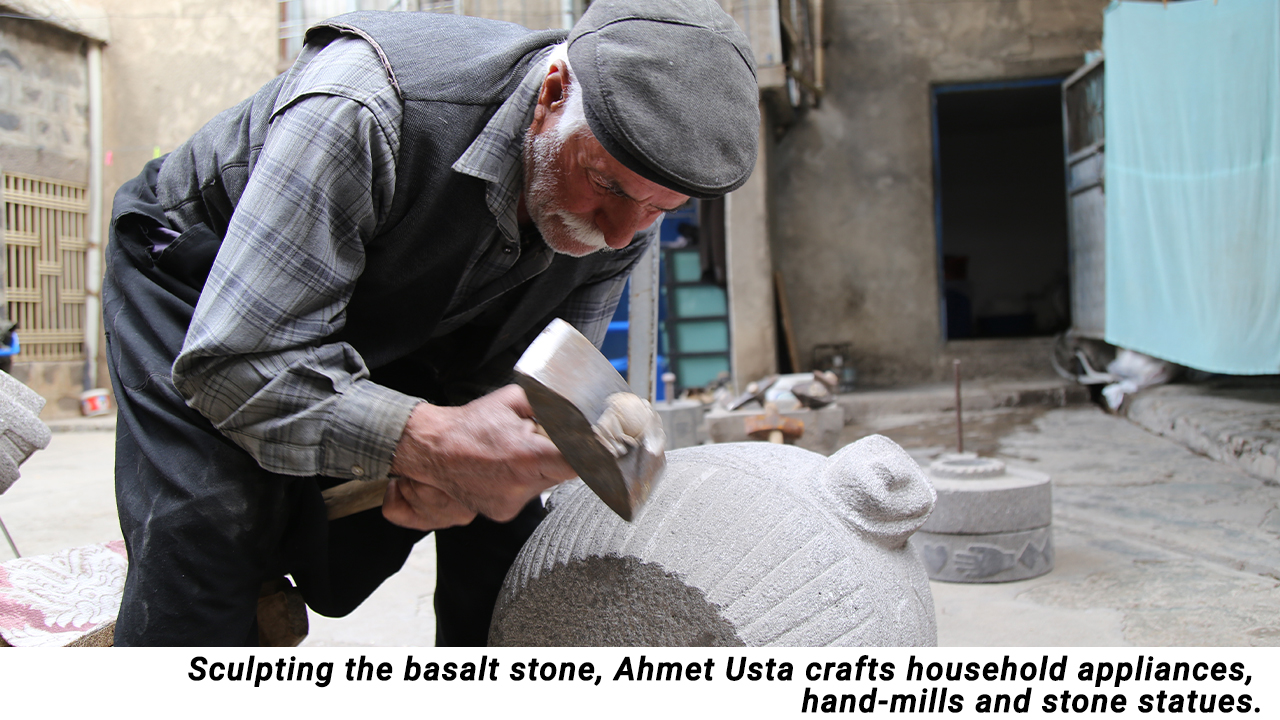 “My father had a great respect for his master, and so do I. Most stone buildings were built by the Armenians in this district [Siverek]. All Muslims in town were the pupils of Armenians masters up until 50 years ago,” Usta said. “According to us, Armenians were the founders of all the techniques of our town, not only the stonework and rock-art; they were the first hammersmiths, bakers and coppersmiths too.”

He continued, “By the time I was a grown man, the Armenian rockart masters were sadly already extinct,” Usta added. “When the the last Armenian master died there was no one in Siverek who shaped stone other than me. I am the only one left.”

Having been retired for six years, he is still keen on continuing his art at home. Sculpting the basalt stone, Usta crafts household appliances, hand-mills and stone statues.

“I learned this art when I was 13. I have built and worked for the reconstruction of countlesss historical buildings, graves and mosques during my 45 years of labour,” he said.

Giant made of concrete rising in the city centre of modern Urfa houses nowadays are in contrast to the historical caravanserais, mosques or mansions built by Armenian rockart masters from basalt stones in almost every corner of the Siverek district. The concrete takes over the beauty of the rock-art, according to Usta. “This art is dying with the end of stone walls. The government does nothing to promote this art. And since retirement, after years of hard work, I am paid a pension of 800 TL.”

But it is not about the money, Usta emphasised. “There was respect for us in the past,” he said. “There is no respect for artisans anymore.”