Coping with Covid-19: Self-governing and solidarity in a refugee camp in Greece- Part II

Life in the Lavrio refugee camp near Athens, organised as a self-governing commune, offers a dignified and agentic alternative against the undignifying conditions imposed on refugees in government-controlled camps.

Kurdish refugees in this camp cope with the pandemic through their own means based on the model of collective self-governance and mutual solidarity. It has been 12 full months that the refugees in Lavrio have managed to isolate the camp from the virus with this model.

Definitely overpopulated in extreme levels, refugee camps constitute the most vulnerable spaces during the pandemic in Greece.

As the pandemic continues, the government takes only restrictive measures devoid of community support in the refugee camps. While the situation is already in such a grave state, one camp copes with the pandemic in a different way. This camp is located in Lavrio, a seaside town with a population of 10 thousand, 60 km away from Athens towards the Southeast.

Despite the lack of support from Red Cross and the UN Migration Organisation, the refugees in this camp are trying to cope with Covid 19 with their own unique management style and solidarity. And this camp has been successful in dealing with the pandemic for 12 months. People living in the camp have managed score zero SARS-CoV-2 positive cases until now.

Currently, the Lavrio camp is largely inhabited by Kurdish asylum-seekers from Syria and Turkey, and it operates a system of radical self-government that is influenced by the Kurdish freedom struggle in those countries.

In the first part of our news story published yesterday, we examined the details of the democratic self-management model of the camp, how this management model coped with the pandemic, the measures taken by the refugees with their own means, and the relations of solidarity networks with the camp.

In this last part of our news story, we will examine other creative measures taken to cope with the pandemic, the relations of the camp residents with the people of Lavrio and what this practice implemented at the Lavrio camp teaches us and the future of the camp.

A creative solution: The oven

Since the pandemic struck, the camp has engaged its approximately 450 residents in a range of efforts – from controlling the gates during lockdowns to stitching masks and constantly disinfecting shared spaces and carrying out body temperature checks. Another measure that has been established as part of collectively coping with Covid-19 in the camp was building an oven for bread. Aimed at limiting the contact with the outside world, the stone oven too is built by the refugees residing in the camp. 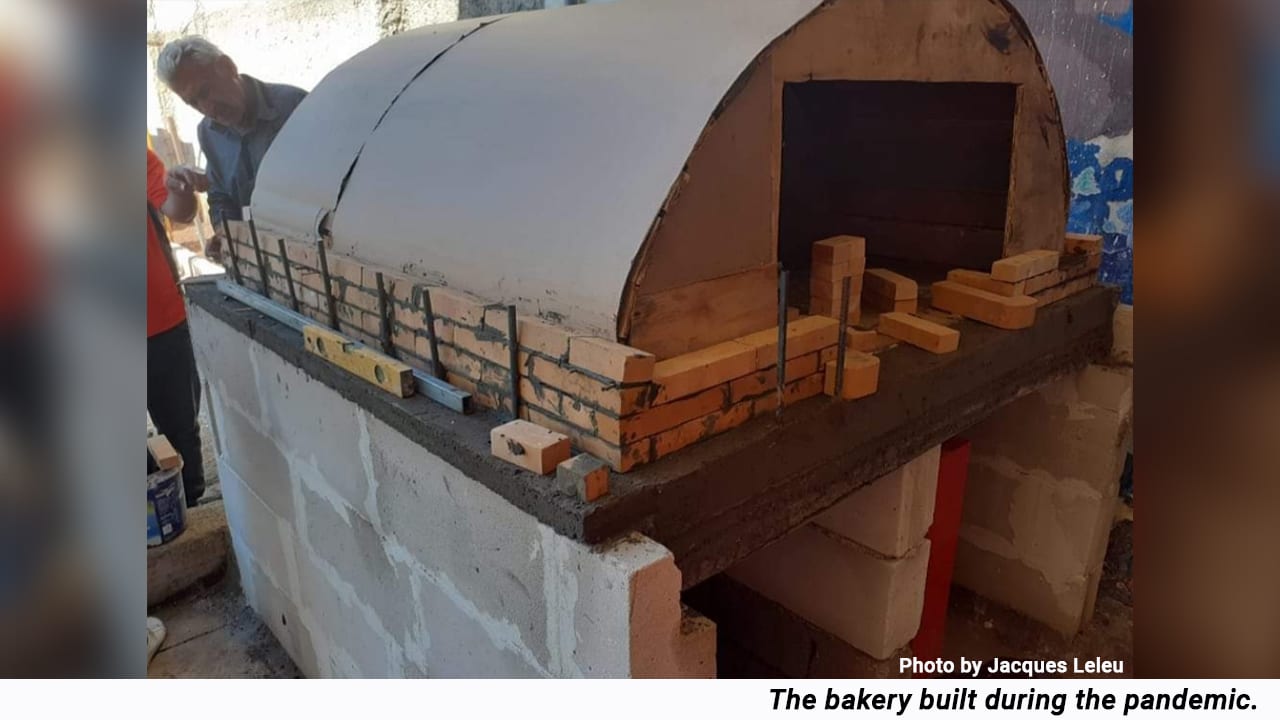 İbrahim Haydo, who came from Qamishlo (Qamisli), Syria to Greece together with his spouse, is one of the residents who carried out the duty of building an oven. He is a stonemason, back in Syria and here.

İbrahim explains that together with his three companions, they collectively built the bakery and he emphasises that the oven was already fully functioning and ready to serve by the third day of their labour. The oven can be heated with a wood burning fire.

The stonemason İbrahim elaborates further: “We can produce bread in an economic way and we can make the bread we want. The need for bread was fully met through this oven during the quarantine period”.

The baker is Recep Eryılmaz, a Kurd from Diyarbakır (Amed), Turkey. Recep explains that they can cook daily bread because they formed a commune thanks to the residing refugees who contribute to their bread expenses from their budget as well as from aid given by solidarity groups, which together make it possible to buy flour wholesale. He says that they can cook around 500 bread products in a day. 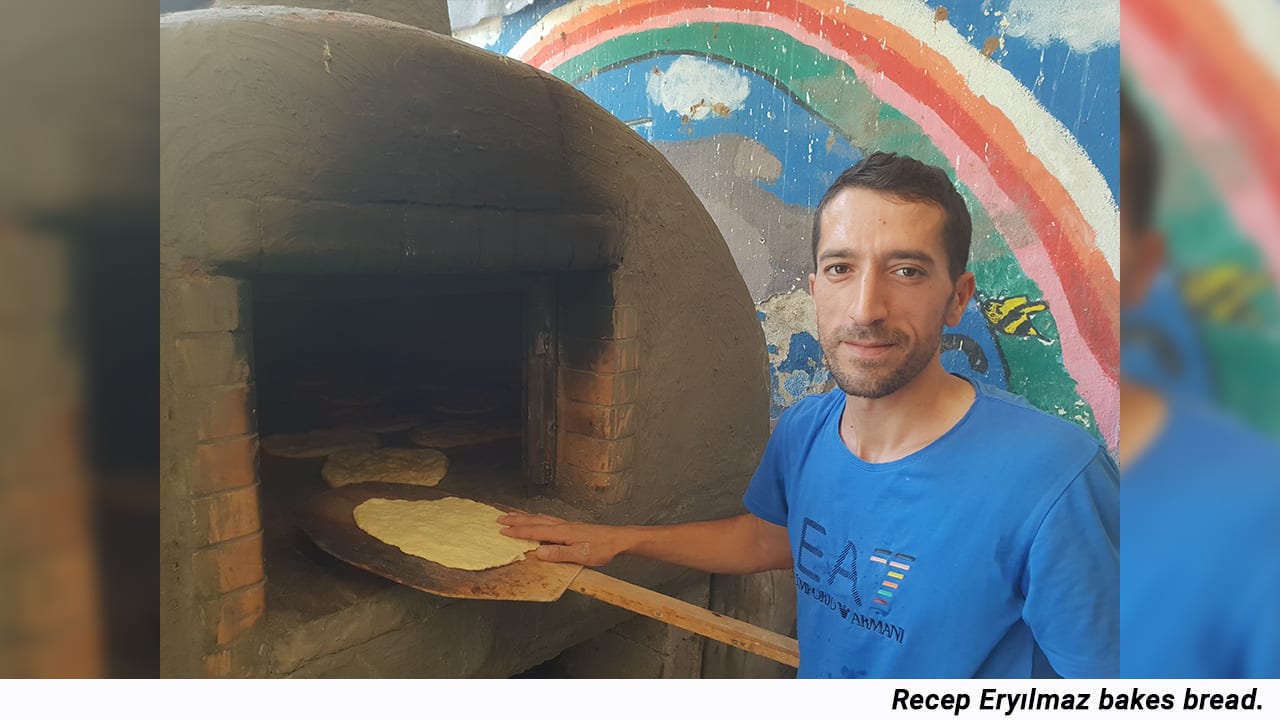 The baker elaborates that he started cooking the bread the way Kurds in Turkey usually bake it; however, thanks to Kurdish residents of the camp who came from Syria, Iran and Iraq, he also learnt how to bake their style of bread too.

He further adds, “The borders divided the Kurds but our communal life here put Kurdistan back together. All breads of Kurdistan are cooked in this oven”.

So, what does the praxis of self-governance and solidarity network developed in the Lavrio camp teach us?

We return to Jacques Leleu from the Convoy Solidarity.

Comparing the camp’s conditions with those in other camps of Greece and noticing the current example of camp’s protection from the virus, Jacques responds: “The cooperative work style, which can be defined as self-governance is definitely the determinant of such periods as the pandemic. Lavrio camp is the practical example of this. This mode of life can be described with three terms: Kindness, the sense of collectivity and trust. The cooperation and the self-governance cannot be predetermined. These are built with daily actions and over time.” 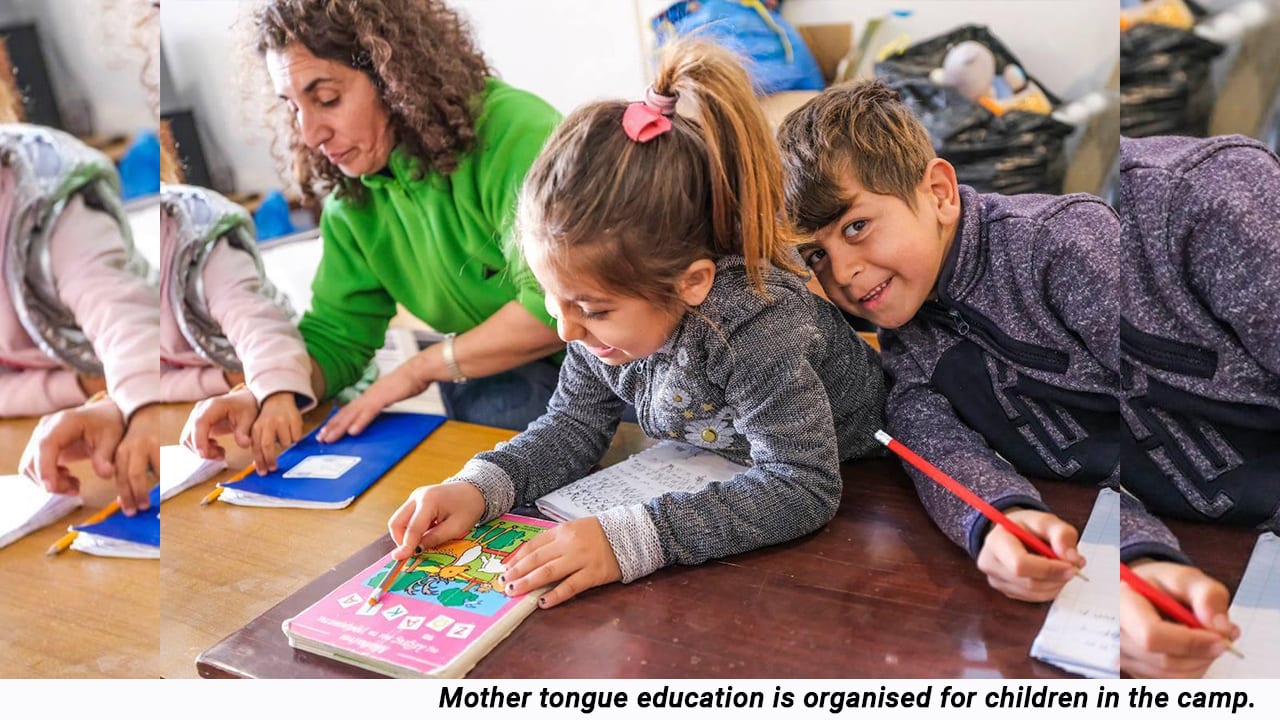 Mayor Dimitris Loukas states that it is necessary to acknowledge the refugees in this regard. “I care and respect for their self-management style not only during the Covid process, but always. This gives very important results. Now especially it is seen out how important this management style is. The camp has protected itself and not a single positive case has been diagnosed since the beginning of the pandemic”.

Relations in Lavrio: Recognition by the people, oblivion by the government

Halil Mordeniz is the earliest political refugee who fled from Turkey to Greece. In the early 90’s, he came to Greece together with his siblings after their parents were murdered by unknown assailants during an attack the state forces organised against their family house. He works at another refugee camp in Sunion town, which is under the control of Health Ministry and UN Refugee Organization and his work is affiliated to the Ministry of Health. 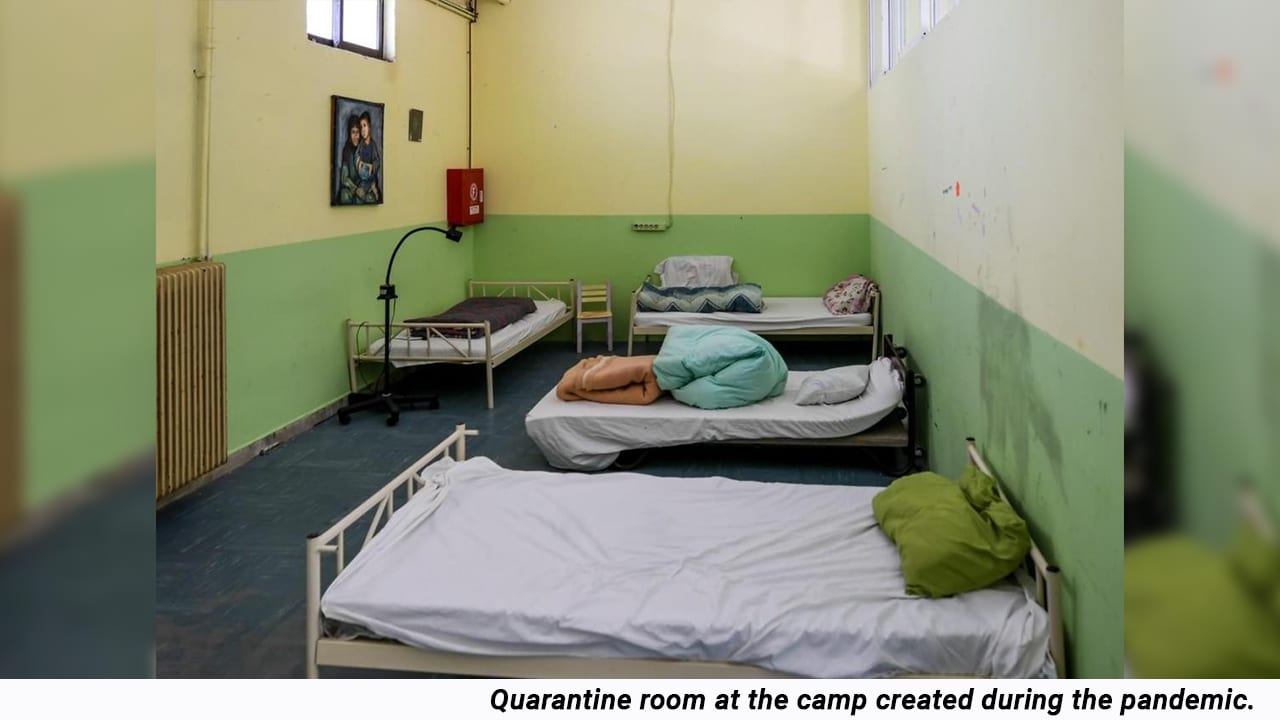 According to Mordeniz, in the past 30 years, Lavrio people have developed strong relations of friendship with the refugees residing in the camp. He explains that there has not been even one problem reported to the officials between Kurdish refugees and Lavrio people for many years.

He further adds, “That’s because both Lavrio people and the Kurdish refugees are mutually respectful for their sensitivities. They know each other’s joy and pain and they share those feelings. That’s what matters. A Lavrio citizen shares the pain of a Kurdish refugee and a Kurdish refugee can share a Lavrio citizen’s pain and joy. Everybody in this town greets each other. While the people of Greece know of this place, recognise and respect the social life and solidarity built around here, the government of Greece stays oblivious”.

What about the future of this camp? There are many rumours such as Lavrio Municipality’s and the goverment’s plan of evacuating the camp and converting it to a hotel or a shopping mall. Cultural Centre of Kurdistan in Athens and the refugees living in the camp are always on alert against such a threat.

They also discuss the situation regularly with the public and they organise several actions such as petitioning in Greece. They have great support from the public against the plan rumours.

But the mayor argues that these rumors do not reflect the truth. Mayor Dimitris Loukas states that the municipality continued and will continue to provide electricity and water services for the camp even though it does not receive ‘camp’ status from the state.

We talk about the situation with psychiatrist Emmy Koutsopoulou, a member of the self-governed health centre in Nea Filadelfeia and one of the long-time solidarity companions to the camp.

Emmy states that the municipal demand of evacuation for the camp is also no surprise considering the Lavrio mayor’s previous description of the camp as a ‘health bomb’ for the town during the pandemic. However, during our interview, the mayor rejects using such a word. Loukas explains to us that he did not use the phrase ‘health bomb’ for the camp during the pandemic. He further comments that he sent a letter to the Ministry of Migration and warned that there is a risk of fire in the Sunion camp affilliated to Lavrio.

Getting back to Emmy Koutsopoulou’s perspective on the camp, she continues to describe its uniqueness by expressing that the refugees living in Lavrio camps have been able to protect their own health as well as the health of Lavrio people against all systematic inequalities and difficulties. The long-term solidarity companion of the camp emphasises that this is no coincidence and it is the outcome of a long and meticulous effort. 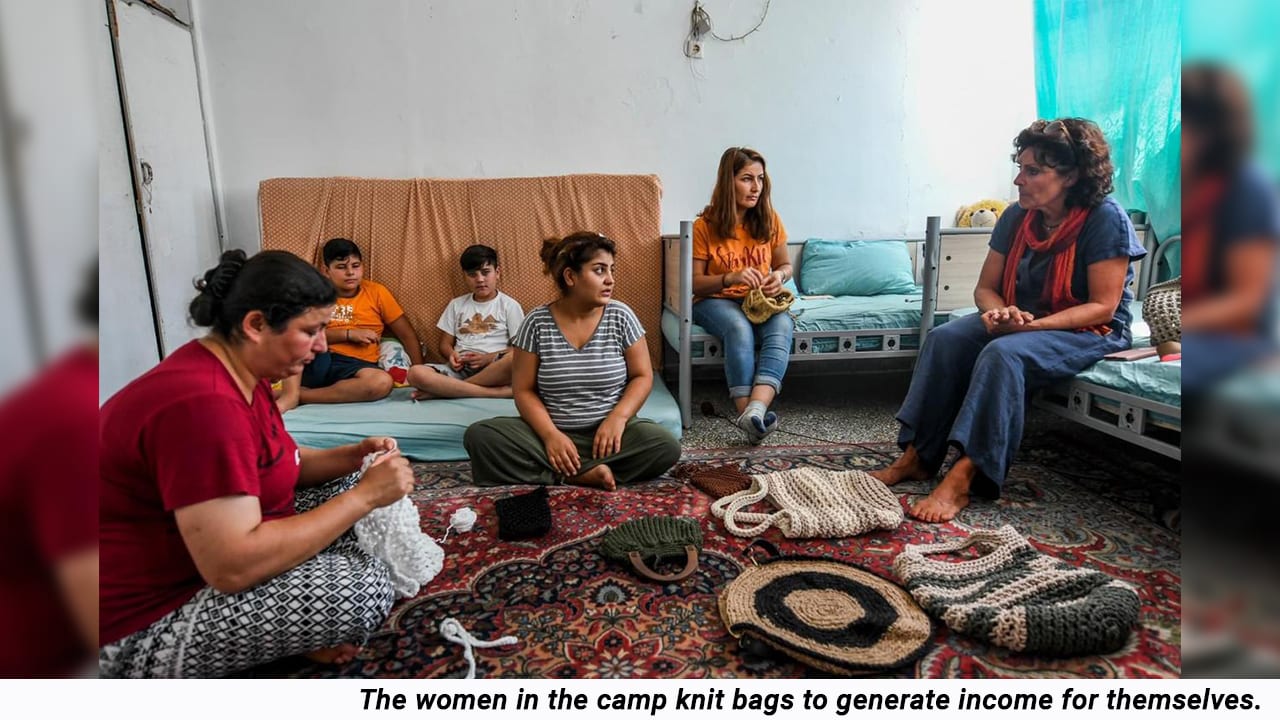 She further explains, “In other words, you don’t always need authenticity and novelty to take a critical situation at hand: The Lavrio example stood upon mutual care, mutual trust, high sense of responsibility, solidarity and team work. Of course, nothing is fully accomplished yet. But this first victory shows us the way”.
Koutsopoulou underlines that the future of the camp again lies in the collective struggle with her following remarks:

“Lavrio camp can be described as a ‘good’ camp. Despite their pain and their poverty, individuals live here as a collective entity, they become proud, they demand their rights, they protect their language and cultures, they dream of their return to home. Although they are deprived from many fundamental needs for most of the time, they hope, they smile and they dance.

It is for these reasons that they could protect their collective life against the oppression from the governments (which is under the pressure of Turkey’s government). However, what I want to see is a future without ‘refugees’ and without ‘camps’. We should never get used to the idea of a ‘good’ camp or to the belief that there must be transitional gaps in between a destroyed life and the rebuilding of a life through its ruins. No, we owe them the peace; we owe them a fight for everyone’s rights to home, bread and freedom”.