Chemical weapons protest outside the OPCW: ‘The Kurdish people need justice too!’

Kurds and their friends protested outside the OPCW building in the Netherlands against Turkey's use of chemical weapons and the the silence of international institutions over this matter.

Kurds living in Europe and their friends from various countries on Wednesday gathered outside the International Court of Justice (ICJ) in the Hague and marched to the Organisation for the Prohibition of Chemical Weapons (OPCW) building, ANF reported. 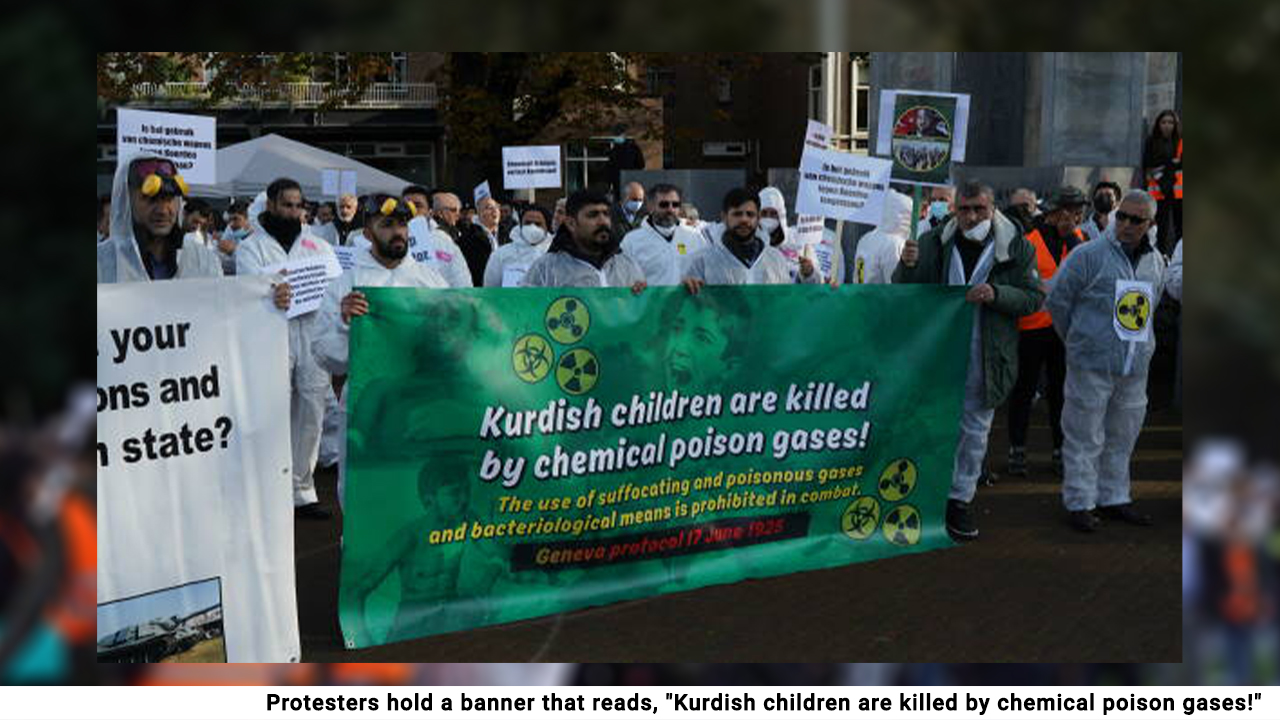 Fatoş Göksungur, co-chair of the European Kurdish Democratic Societies Congress (KCDK-E), made a statement prior to the march: “We have gathered here today because of the silence of all the international institutions in Europe, including the silence and lack of justice from the International Court of Justice.”

Göksungur said that this silence only encouraged Turkey to murder more Kurdish people with chemical weapons. 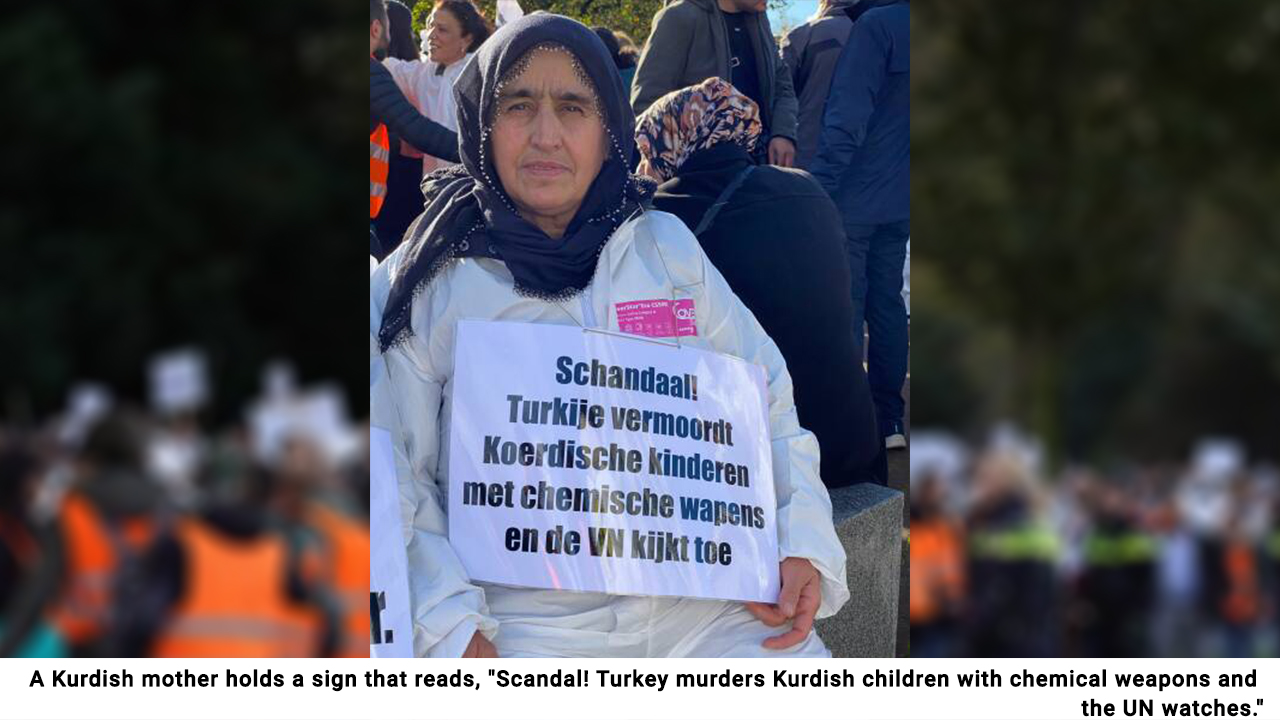 Karamus said that Kurdish people were being murdered with weapons supplied by European countries, adding, “The dictator Erdoğan uses the most up-to-date weapons against the Kurdish people, with no thought for women, children or the elderly.” 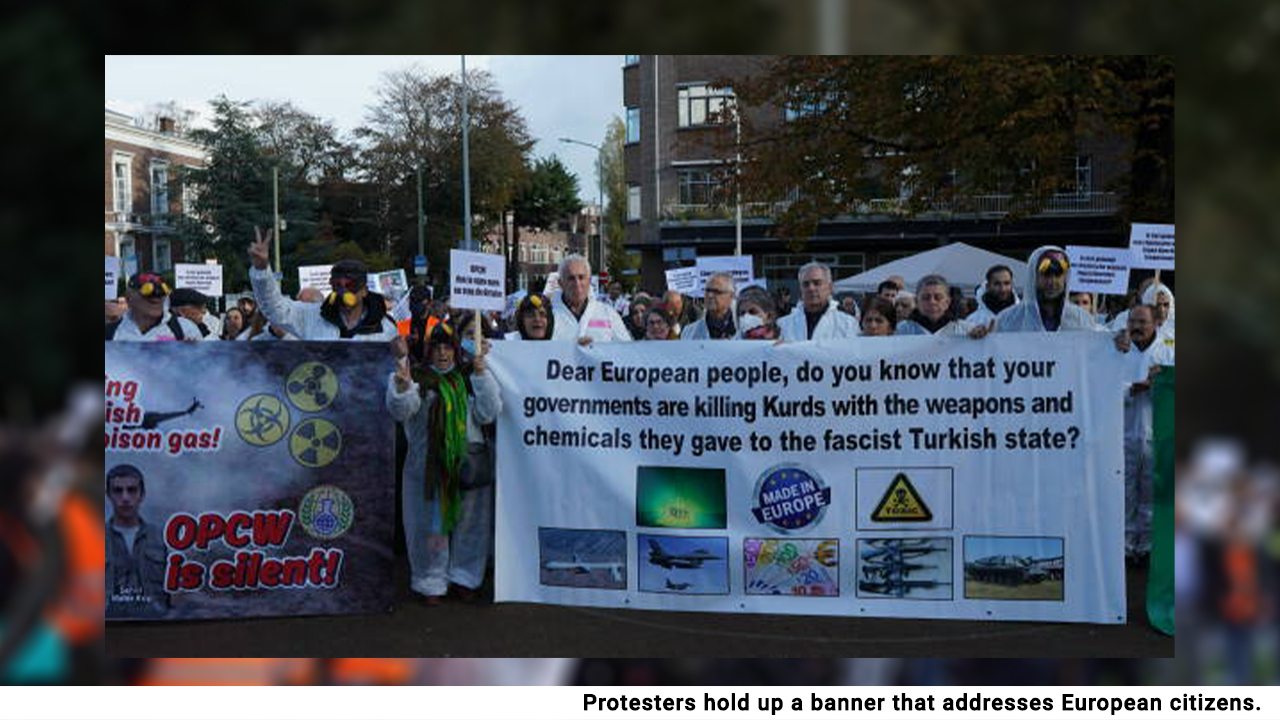 Some demonstrators wore masks and white hazmat suits, and they carried placards and banners protesting against the silence of the OPCW.

As the police blockaded the protesters, Remzi Kartal, co-chair of the People’s Congress of Kurdistan (Kongra-Gel) addressed the crowd: “The Turkish state is using chemical gases and prohibited weapons in Zap, Metina and Avashin in Kurdistan. In the six months and 11 days since Turkey started these attacks, they have use chemical weapons against the guerrillas 325 times. In this time, 33 guerrillas have fallen as martyrs, the majority of them women.”

Kartal drew attention to the calls of the People’s Defence Forces (HPG – an armed wing of the Kurdistan Workers’ Party, the PKK) and leaders of the Kurdistan Communities Union (KCK): “They have said that the Turkish state is committing crimes against humanity, and not to remain silent. This has been expressed in many places such as the European Parliament, the Council of Europe (CoE) and national parliaments.” 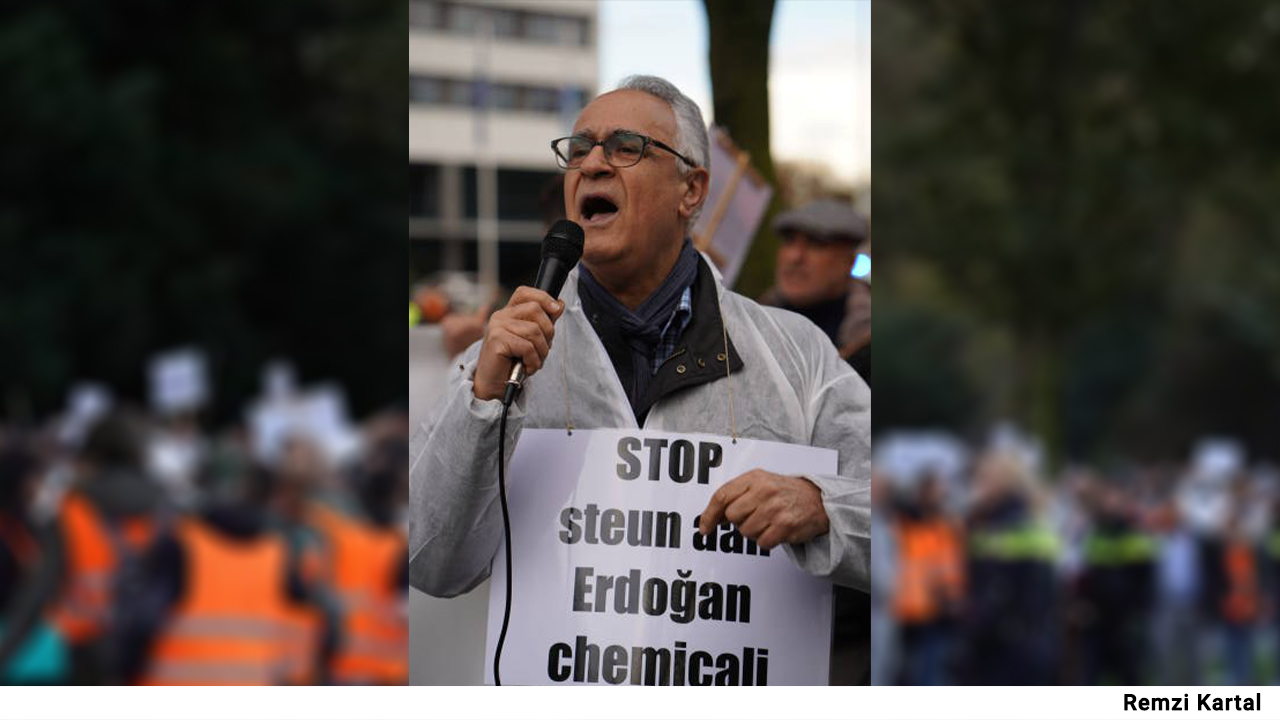 In light of the fact that chemical weapons are being used against the Kurdish people, Kartal noted, the European Union remains silent.

“What are you doing about it? Why are you silent?,” he asked, addressing his criticism against the CoE, the EU, NATO and the US.

Kartal stated that the European governments stand silent in the face of the massacres and ‘dirty politics’ perpetrated against the Kurdish people.

“These states have a hand in this international plot. This is why they have been using chemical weapons [against the Kurds] from Aleppo to the present day. This is the reason we, the Kurdish institutions and people in Europe, have come to the International Court of Justice on behalf of the Kurdish people as a whole,” he said. 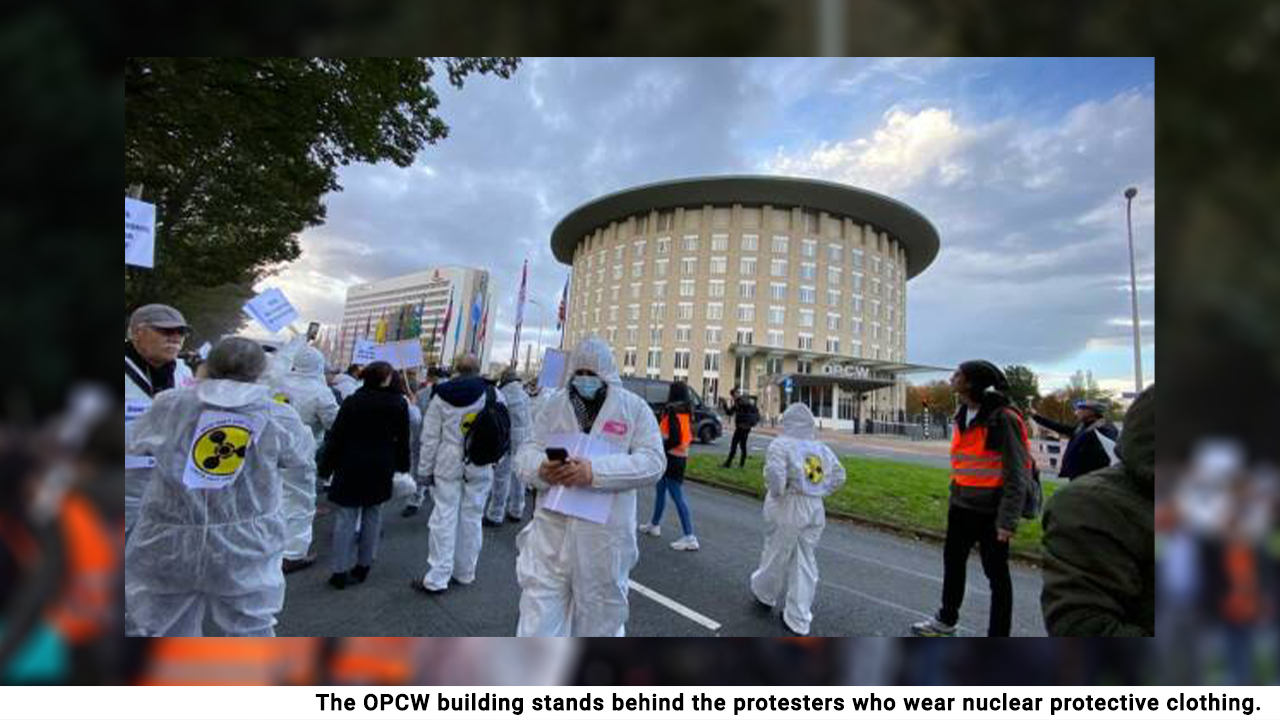 “We want the OPCW to hear the voices of our people. Chemical weapons are being used against the Kurds, so you need to go out there and investigate! Expose the truth, tell the public!”

During the peaceful protest, some demonstrators have staged lie-ins, taking to the ground to symbolise the Kurdish people who have been killed by chemical weapons. 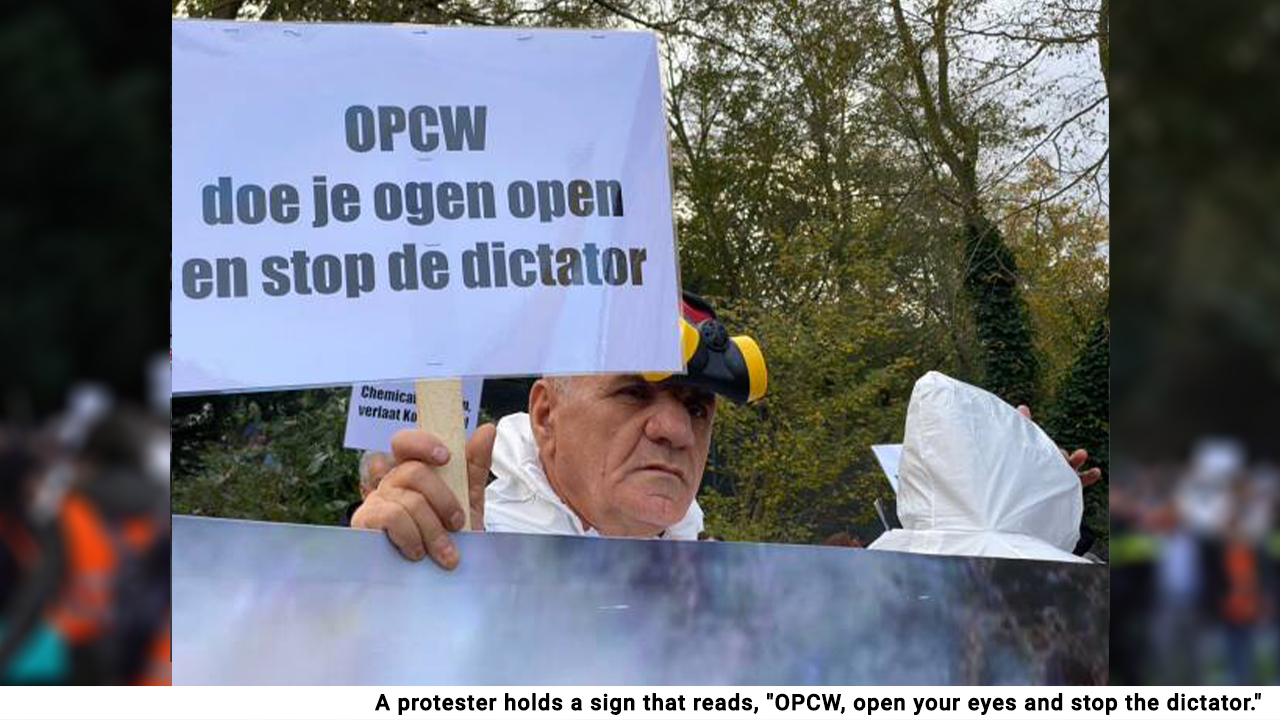