aysel needs us, and we need aysel

“they imprisoned aysel lawlessly, and want to imprison her once again within the growing void inside her mind; to sentence her to oblivion. Let us not forget her, let us embrace her,” writes ayşe düzkan for yeni yaşam.*

the readers of this publication already know, but I would still like to make a note: aysel tuğluk, who has been incarcerated since december 2016 in the kandıra prison was diagnosed with dementia in march 2021 after a medical examination by five physicians in kocaeli university faculty of medicine. dementia means permanent loss of memory and usually emerges in later stages of life. recent years are full of traumas for many of us, and it’s been particularly hard for those who are in jail. yet, aysel tuğluk has lived through an even more different trauma due to things that occured at the burial of her mother. these are said to have triggered her illness. the conditions in prison further accelerated the progress of her illness. for this reason there is a campaign going on for her release. she was finally sent last week to the forensic medicine institution for examination. this gave some hope to those who demanded justice for her. according to the court order, she could have stayed at the forensic medicine institution for three weeks. but the officials of the institution sent her back in three days to the kandıra prison where she’s spent her last five years.

her brother alaattin tuğluk will be visiting her in prison by the time this article is published. so there may be some fresh information coming while you are reading this.

some other things you may already know, but i’ll note again. according to reports by the human rights association, there are currently 1564 ill prisoners incarcerated in turkey, 590 in serious conditions. the human rights association underlines that this is the number of cases that could be verified and that the number is actually much higher. the covid pandemic enabled many privileged prisoners to be released. but this did not work for political prisoners. they are not even released if they are suffering from many other illnesses. turkey does not have capital punishment but the political administration seemingly attempts to destroy people who have been incarcerated for political reasons. ill prisoners who ought to be released according to legal provisions are simply left to die. this is not a coincidence. it’s a policy of destruction, terrorising and subjugation against the politics of the left.

prison conditions in turkey have never been good. not only the political prisoners but all prisoners have spent and are still spending years of their lives in conditions unfit for human dignity. but there are periods when the conditions are particularly awful. the operation in the year 2000, dubbed return to life, was the most brutal prison massacre in recent history, but the period following the 12 september military coup was most probably the worst in terms of the routine practices. the prison conditions changed in a matter of only a few days after the military coup. now the conditions get worse by each passing day and it looks like similar conditions are being created in a more gradual way. we have recently heard of people injured in kayseri t type prison, people tortured in the bünyan prison, a fire starting at the ümraniye prison.

in societal conditions where people can find themselves in prison even for sharing a social media post, the situation in prisons should be a crucial issue for the social opposition. after 12 september, even in the direst of conditions, various reports on prisons had been prepared. today this is essential at least as much as it was back then. aysel tuğluk’s case is also emblematic in this regard. in her person, the rights of all prisoners, whether ill or not, are upheld.

aysel tuğluk is publicly known by her political identity and as a lawyer. she is in fact a person who has played a distinguished part in the struggle for democracy, human rights and the law. those who have read my articles before will recall what a bright mind and extensive knowledge she has. she lost her father and brother when she was very young, and her life has been full of struggle. she was amongst the founders of the patriotic women’s association that served as the signal flare for the kurdish women’s freedom movement. 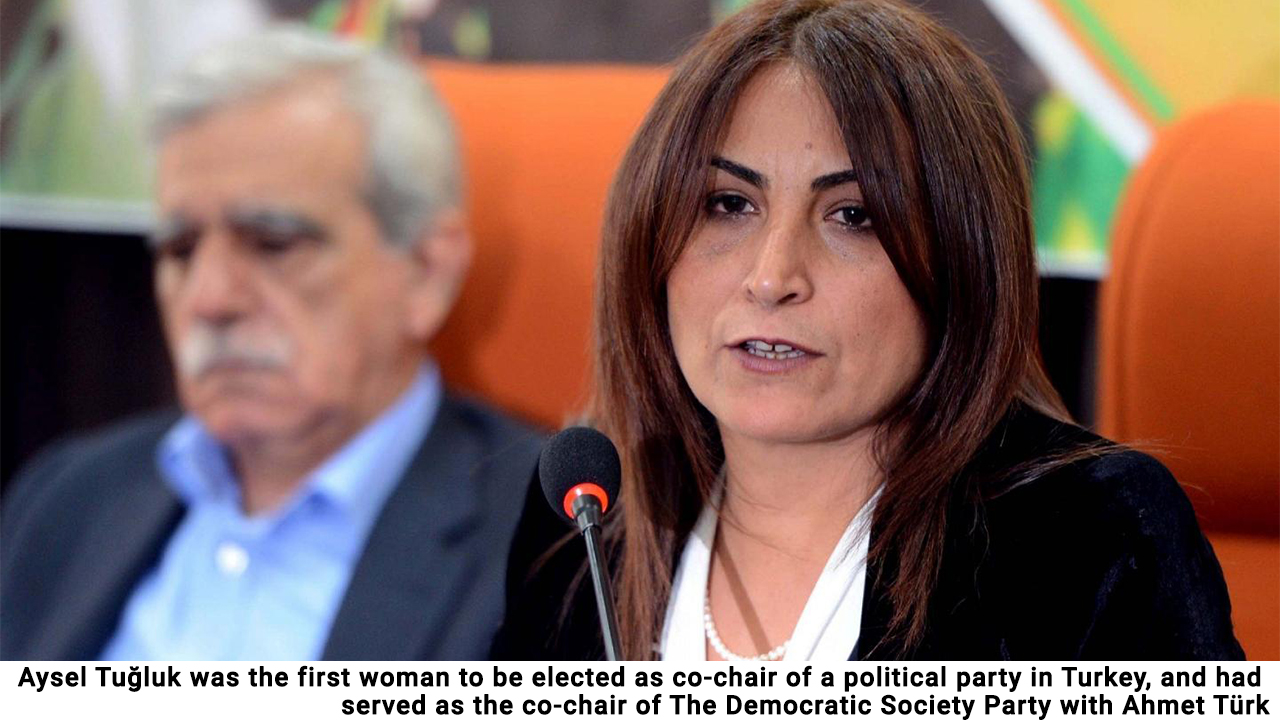 but as well as all of these, she is the first woman who served as the co-chair of a political party in turkey. she become the co-chair, beside ahmet türk, of the democratic society party (bdp) at the first congress of the party on 9 november 2005 when the co-chair system and the gender quota of 40 percent were accepted for the first time. for this reason aysel tuğluk has a very special place in terms of women’s political representation in turkey. her name will have a distinct place both in the kurdish freedom movement and in the political history of turkey.

they imprisoned aysel lawlessly, and want to imprison her once again within the growing void inside her own mind; to sentence her to oblivion. let us not forget her, let us embrace her.

* purposefully, no capital letters were used in this article in accordance with the style preference of the writer not to use any.