Members of the Delegation for Peace and Freedom in Kurdistan

The autonomous Kurdistan Region in the north of Iraq is steeped in the history of the earliest civilisations, endowed with rich biodiversity and culture, but traumatised by decades of genocide, forced evictions, and internal conflicts.

When we read the news through social media that the region was being bombed and invaded by the Turkish military, NATO’s second largest army, with several civilians killed so far and more than 1500 displaced, hundreds of hectares of forest ignited and decimated, and 22 villages evacuated, we were yet again disappointed by the lack of media coverage, political consequences, or civil society responses in the international community. So, when the call came for solidarity, we joined the International Delegation for Peace and Freedom in Kurdistan, to bear witness and to break the silence around Turkey’s violent ongoing expansion.

We arrived at the airport at Hewlêr, the capital of the autonomous Kurdistan Region of Iraq, some 100km south of the Turkish border. 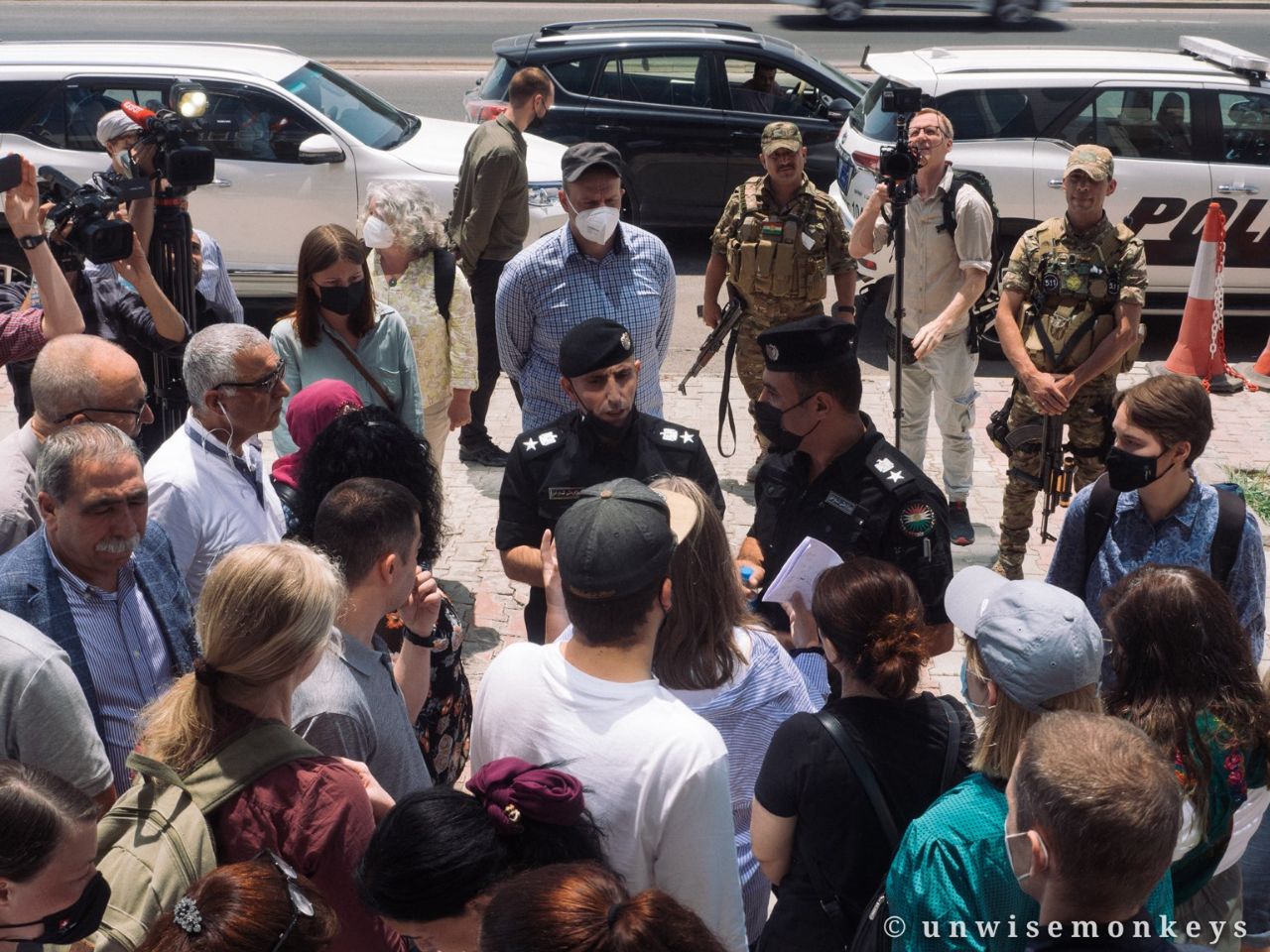 Queuing at immigration, we saw a large group from Europe just ahead of us, also inbound to join our delegation, who were detained and their passports confiscated by the Kurdish authorities without explanation, including Dutch journalist Frederike Geerdink.

After arriving at our hotel, we learned that this group had either been deported back to their home countries or arrested, without any legal basis; by the end of the day, a total of 40 people from all over Europe had either been deported or arrested, and dozens more had been prevented from boarding flights from their countries at all, including a large group of 27 people from Germany and Switzerland, including Hamburg MP, Canzu Özdemir in Düsseldorf. The reason given by the German federal police was that through such international delegations as ours, young people had previously joined the PKK in armed struggle against the Turkish military.

Despite this repression, around 70, of a planned 150, members of our delegation, including politicians, academics, human rights activists, syndicalists, journalists, feminists, and ecologists, and representing more than 14 countries, managed to come together and begin our work for peace and freedom. Our aim was to establish and promote dialogue with and between members of the different parties of the Kurdistan parliament, and visit non-governmental organisations from civil society.

In defiance of international law, the Turkish state has been occupying northern Iraq since June 2020, but on the 23rd April 2021, it initiated new, wide-ranging military operations dubbed “Operation Claw-Lightning” and “Operation Claw-Thunderbolt” in South Kurdistan in the regions of Matina, Zap, and Avashin. 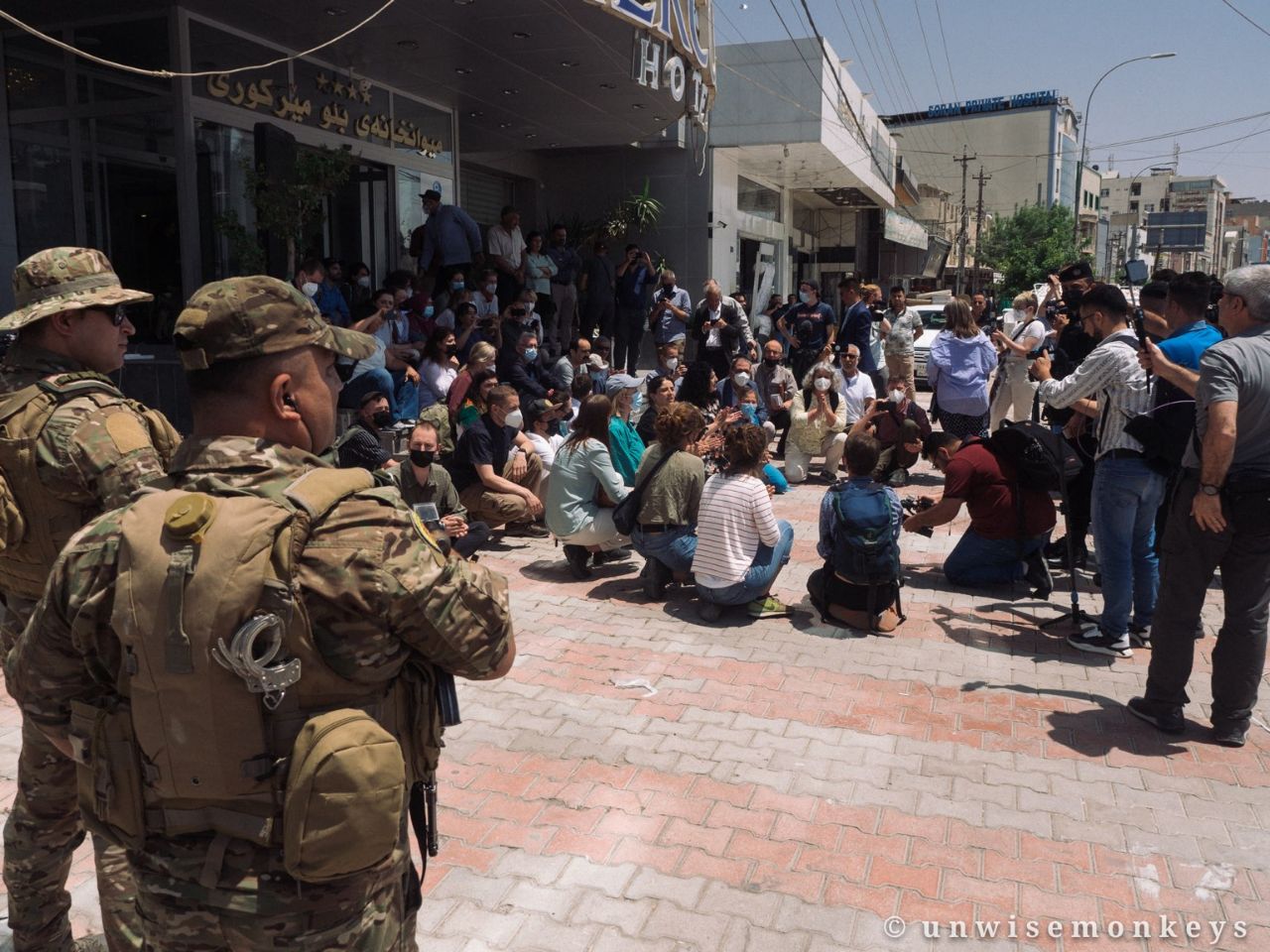 The Turkish military is attacking not only the people of the region, but the land itself, bombarding the mountainsides, starting fires, and logging swathes of forest to truck tonnes of timber back to Turkey. This constitutes a war crime, committing ecocide in a region of several endangered species, contributing to the worsening ecological crises of biodiversity loss and mass extinction.

The current invasion of Kurdistan is part of Turkey’s neo-Ottoman expansionism through the Middle East and Eastern Mediterranean (by involving itself in all the conflicts in the region, including in Algeria, Armenia, Libya, Syria, Tunisia, sometimes sending in militants and causing further destabilisation, and escalating tensions with Cyprus and Greece).

It is no coincidence that this current invasion began on the 106th anniversary of the beginning of the Armenian Genocide, 24th April — the ongoing assault can only be interpreted as an open threat of genocide. This military action is just the latest iteration of Turkey’s decades-long policy of oppression of Kurds, which has led to the invasions of Rojava (North and East Syria) in Efrîn in March 2018 and Girê Spî and Serêkaniyê in September 2019. 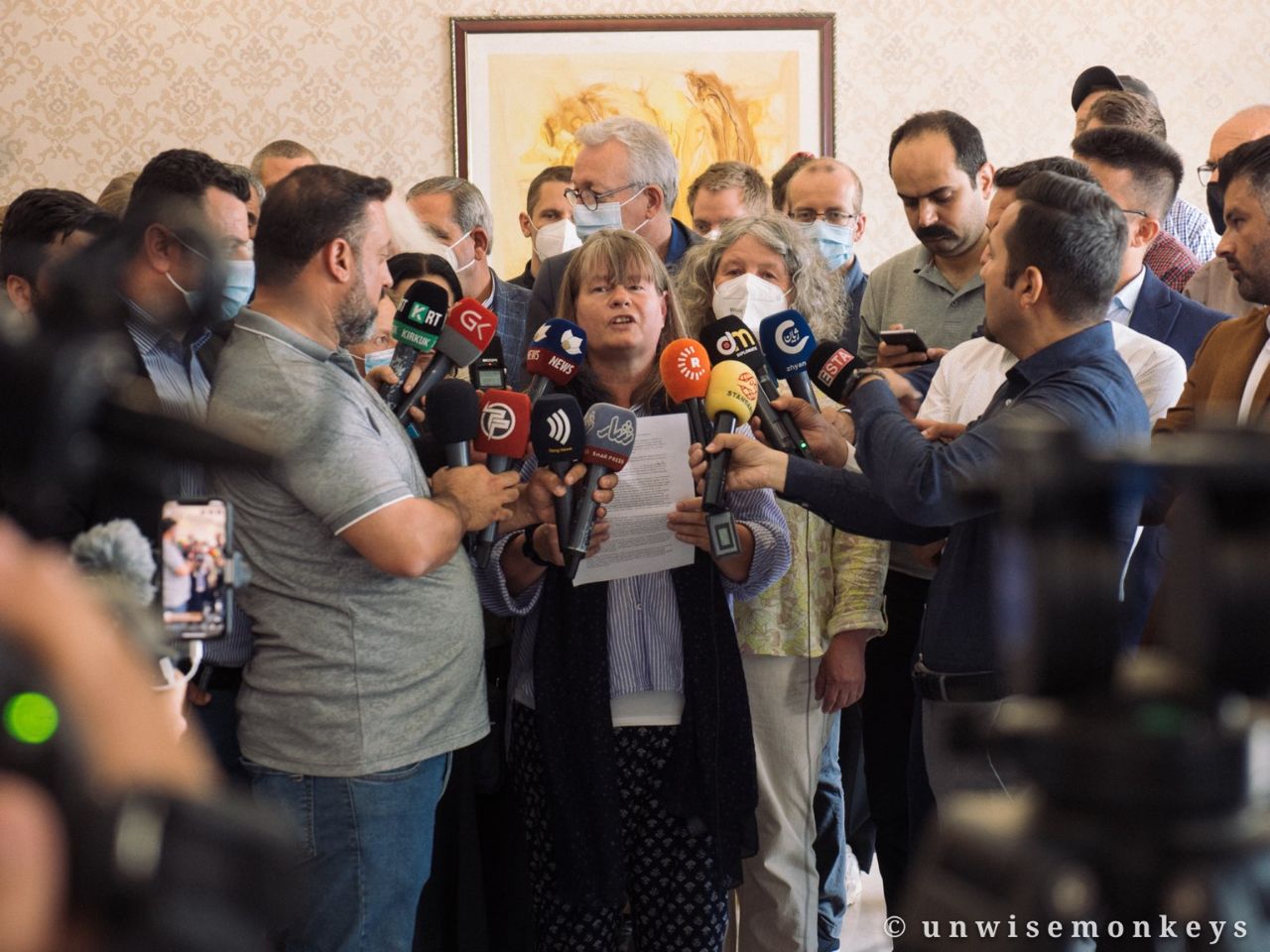 NATO’s geopolitical games render its members states as complicit, through their tacit approval of these war crimes. This connivance stems from NATO’s interest in maintaining a powerful ally in the Middle East, which in turn explains the silence from Europe and the US about Turkey’s crimes. This has resulted in a bizarre paradox, whereby NATO supports Turkey, who, in pursuit of its imperialistic goals, uses men from the so-called Islamic State and other Islamist militant groups — for example by importing mercenaries via Hewlêr to Qandîl (in its obsessive drive to oust the PKK guerrillas from the Kurdistan region) — which NATO supposedly wants to defeat.

This is indicative of the political situation in Southern Kurdistan, since these mercenaries could not have come through Hewlêr without the acquiescence of the KRG. 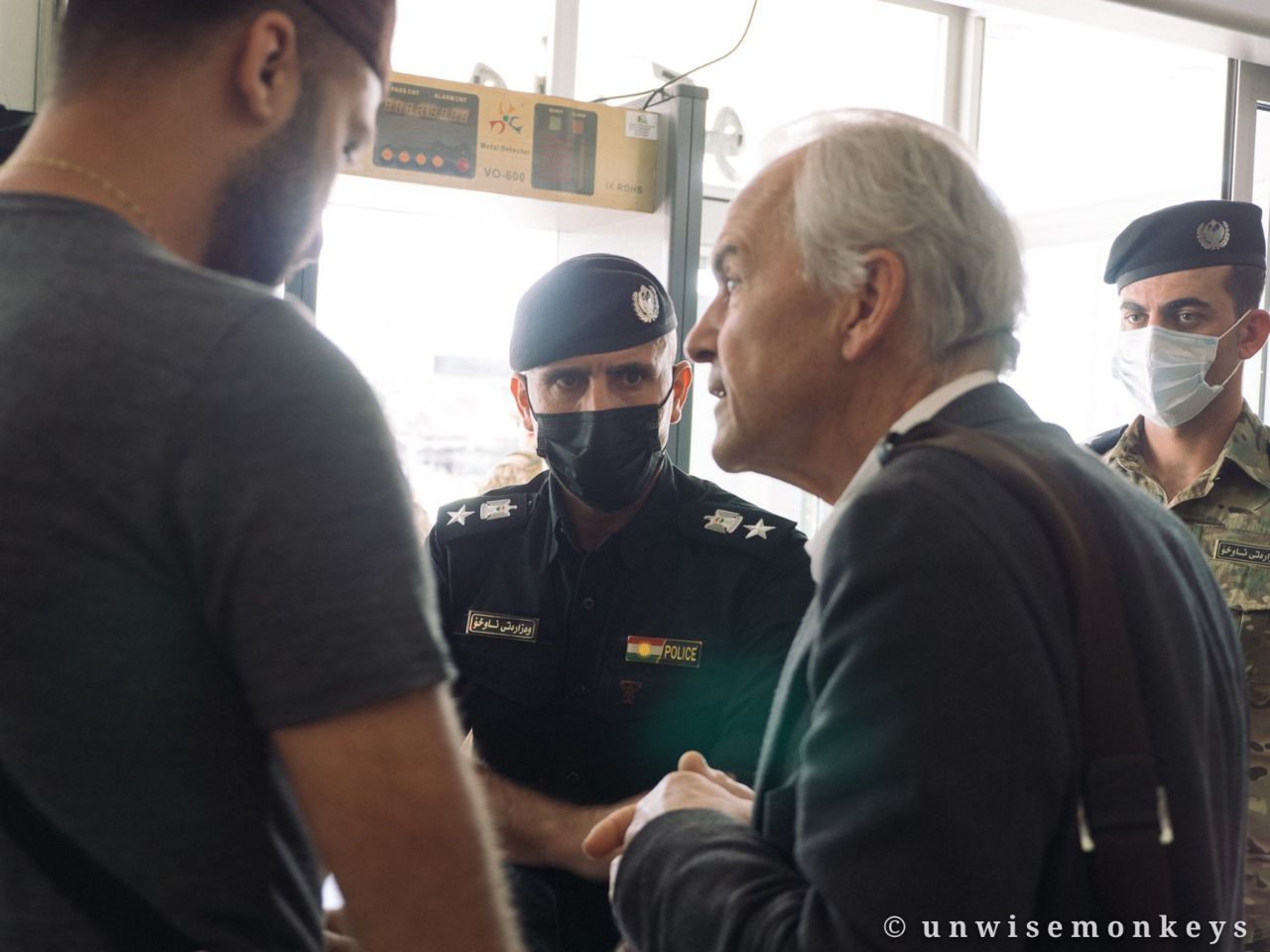 So, we have a situation whereby the KRG allows Islamist mercenaries access to its mountains to fight the PKK, but arrests and deports members of the international delegation who call for peace and freedom for Kurdistan. These tensions put at risk the safety and security of all Kurdistan, creating rifts between Kurds in the face of what should be a common enemy; the KRG’s current actions are fulfilling the observation of former Iraqi President Saddam Hussein, that Kurdish organisations were too hopelessly divided and subservient to foreign powers to achieve long-term success.

Our delegation made a plan for the 14th of June, to go to the United Nations headquarters in Hewlêr to read our formative declaration, International Initiative to Defend Kurdistan which has so far been signed by 251 signatories in many nations, across six continents. 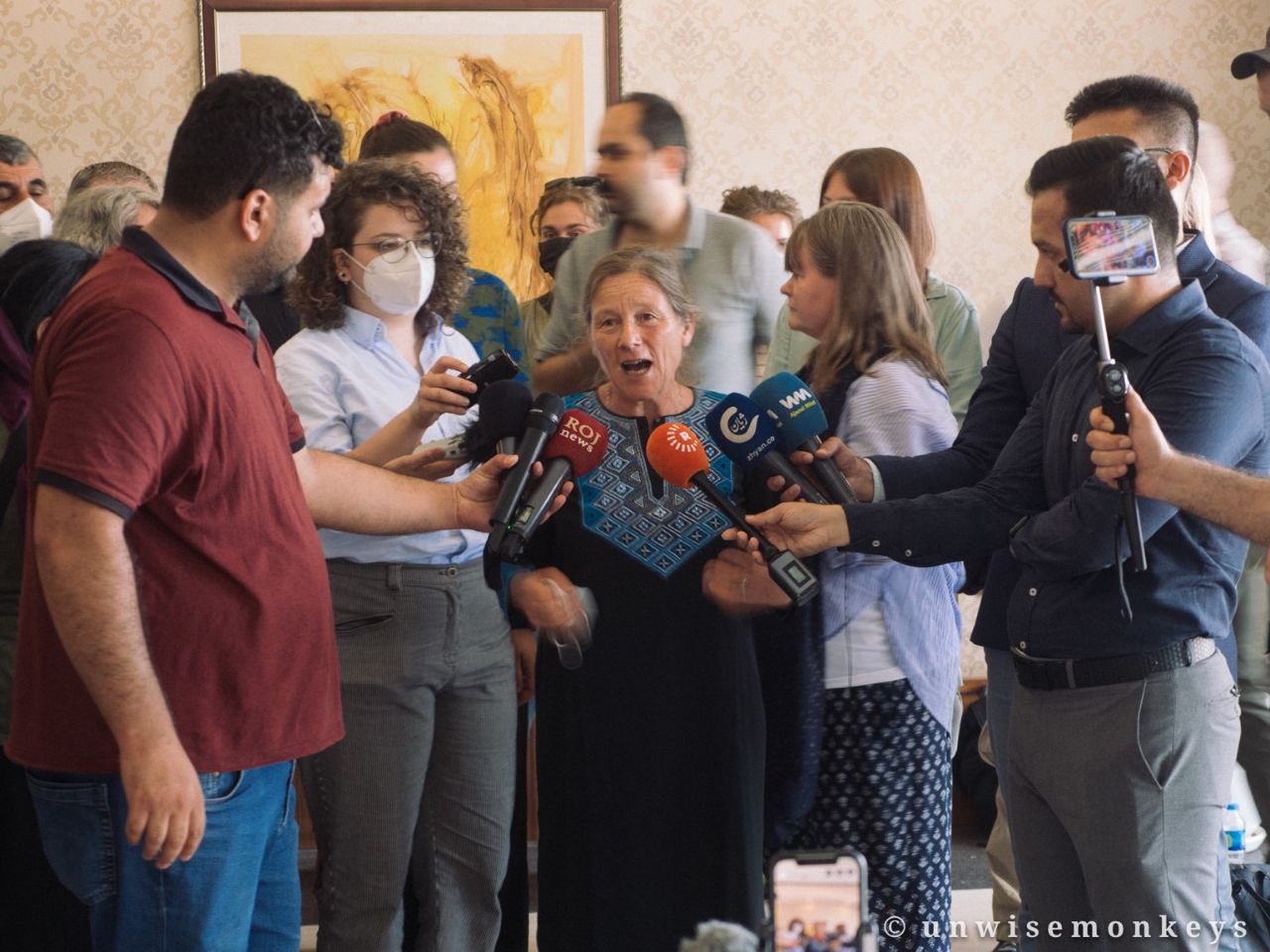 However, on that morning, we woke up to security forces of the KRG guarding our hotel and preventing the delegation from leaving. With the local journalists and television crews waiting for our declaration, the security forces and police tried to tell us that we didn’t have the right to speak up, because we do not have Iraqi passports and had been denied permission to protest. Despite this, we decided to hold our press conference in the hotel lobby all the same. After several speeches and interviews, we made to leave the hotel to walk to the UN, but the security forces (by now having amassed on the pavement) stopped us outside the front doors. In response, we sat down in an act of civil disobedience to protest our treatment by the KRG. After they forced us back inside the hotel, we continued our protest by dancing until this too was stopped. 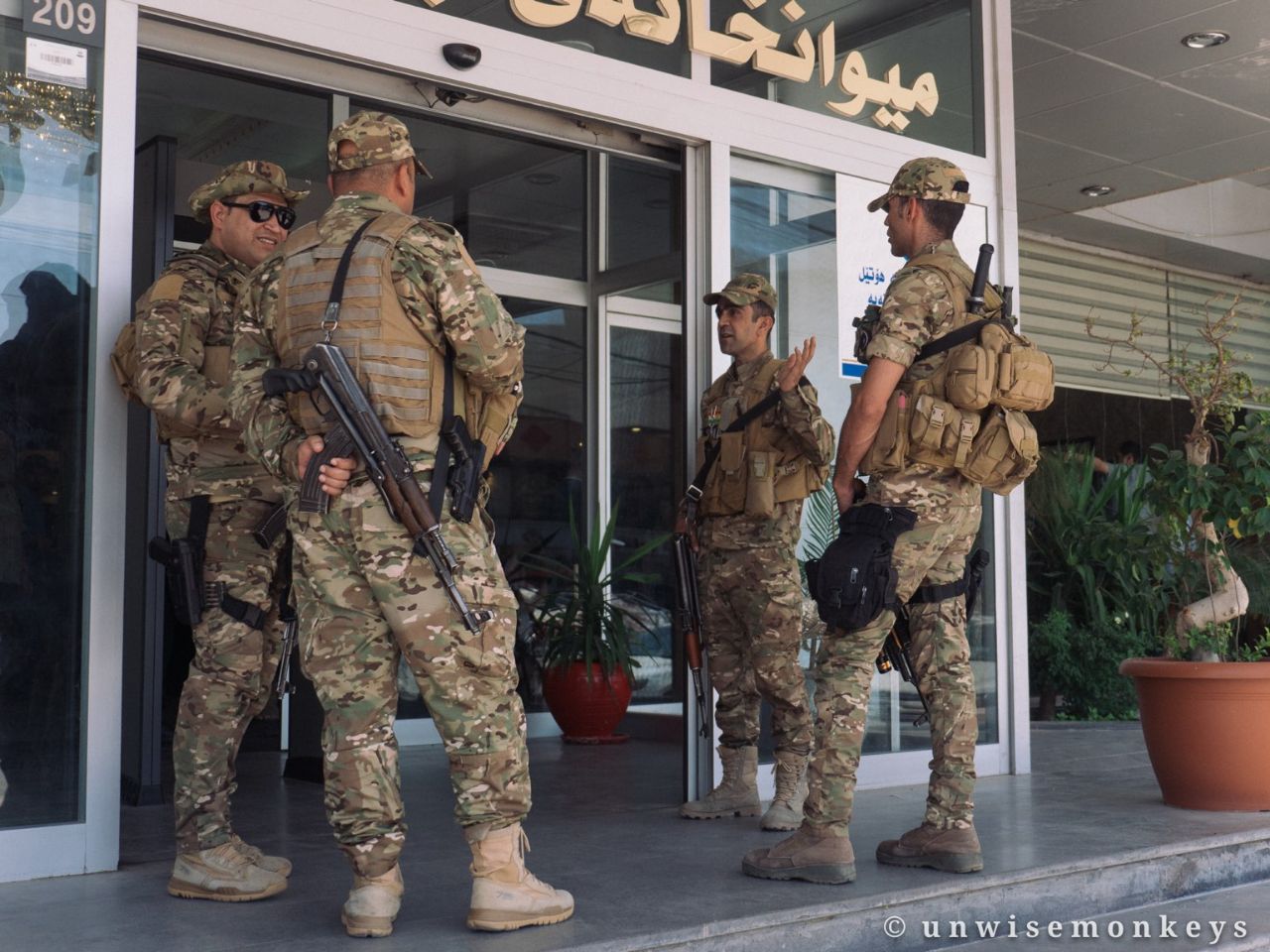 We suspect that the KRG tried to sabotage our plans in order to suppress the media coverage of our message to the international community. Them forbidding us from protesting against the attempted genocide of their own people exposes the paradox at the heart of the KRG’s policies — namely, its economic dependence on Turkey.

This dependence undermines the narrative of the independent Kurdish region, whose foundational myth is one of resistance against oppression from the surrounding nation-states. To keep up its narrative, the KRG now has to disguise this paradox behind doublespeak — as experienced by one of our friends, who upon his deportation from the airport in Hewlêr, was told by the border guards that his participation in our delegation for peace and freedom was equal to terrorism.

This equation of political discussion and engagement with “terrorism” is taken directly from the Turkish government’s rhetoric; if the KRG continues to adopt such language, this carries worrying implications for the future of democracy in the Kurdistan region.

We therefore call on all Kurdish parties, institutions, and people to take a united stance against the Turkish occupation. The ecocidal, genocidal attacks by the Turkish state are continuing, and it is only by being in solidarity with each other, across borders and party lines, that this can be stopped.

Images by Members of the Delegation for Peace and Freedom in Kurdistan for Medya News.