Another film to resist the mentality of destruction 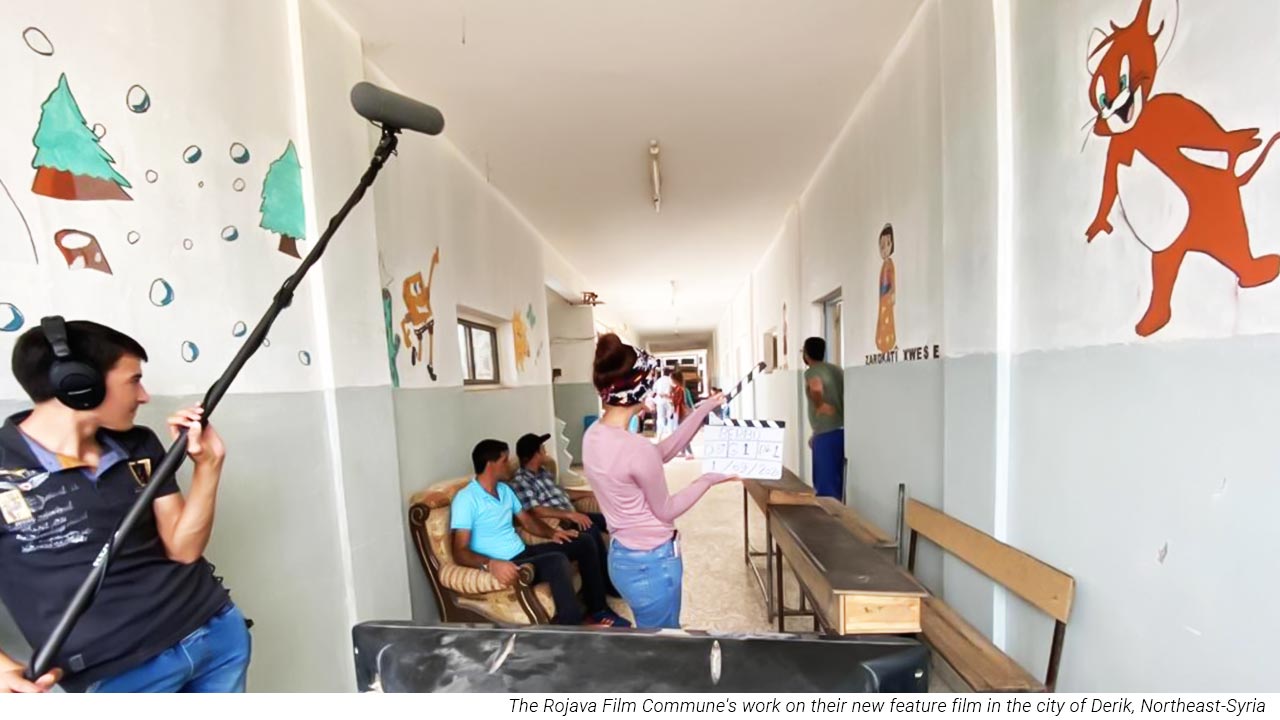 The Rojava Film Commune is working on a new feature film. It will be about the Turkish invasion of Serêkaniyê, Northeast-Syria, which happened last year in October. So while Turkey is violating human rights on a large scale, as was confirmed again in a United Nations report this week, the film commune members are running around with cameras, decor pieces, actors, extras, and costumes to turn it into a story on a white screen. A surreal exercise, you may think.

Last January, I was in northeast-Syria and I travelled with the Commune as they were showing their previous feature film, ‘The End Will Be Spectacular’ (which is currently screening in several European countries), to their people. I hadn’t been sure what to expect from the tour. Nothing too much out of the ordinary, I mean, how spectacular can a film premiere tour be, right? But I was nothing less than overwhelmed.

It turned out that there were no cinemas in the whole of Northeast Syria. So the Commune got to work and made them themselves. With materials from iron shops, with white plastic cloth and with a lot of creativity and persistence, they assembled white screens and put them up in theatres, wedding halls and university college halls. They designed and printed the film posters themselves too. When I arrived, a few Commune members were sawing wooden slats and turning them into frames to hang the posters on.

For days, we drove around in the region from one screening to the other, welcoming the people, who felt acknowledged by the film. I remember one of the members, Sêvînaz Evdikê, saying as we were in the minibus with Kurdish music playing loudly: “This is my life. Being on the road with the group, filming and screening our films to the people. I want to be nowhere else but here”. 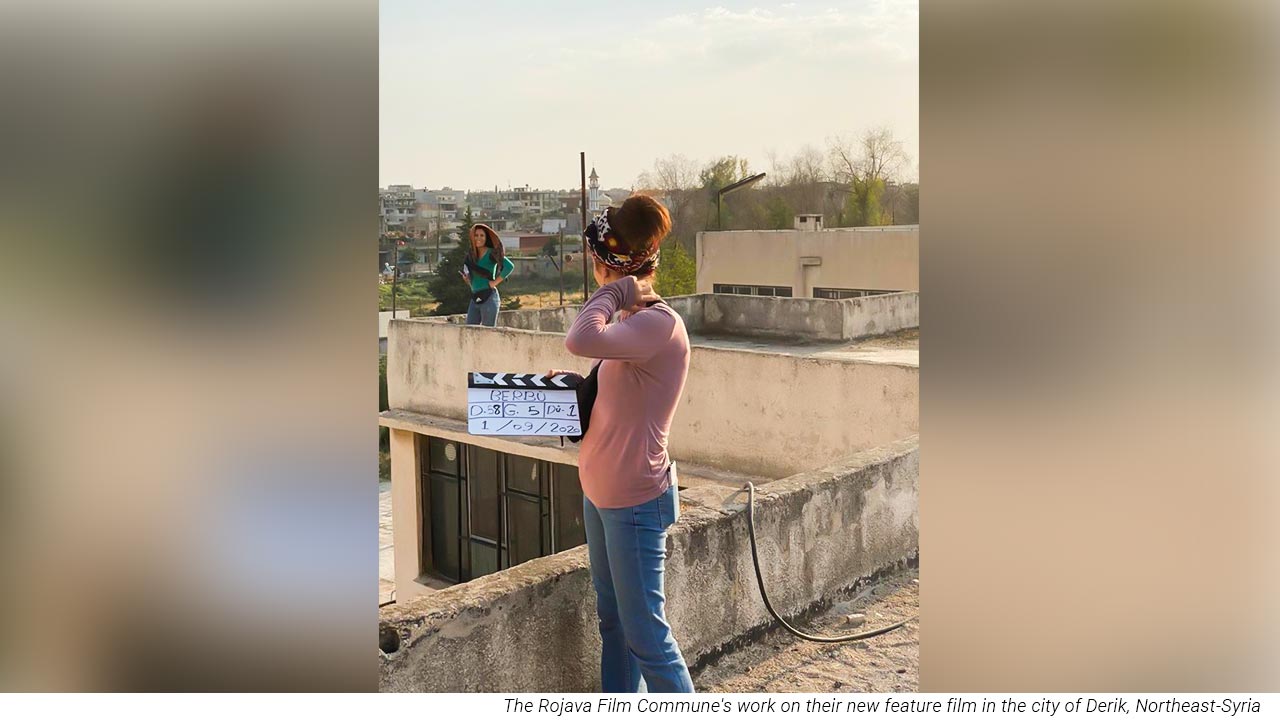 Sêvînaz is the director of the new film. The remarkable thing is that she is originally from Serêkaniyê, one of the towns now under Turkish occupation. She lost a beloved uncle in Turkey’s violent takeover. And the people know what has been going on ever since, and which has been fully exposed now by a report by the Human Rights Council of the United Nations. Turkey and its mercenaries (the Hamza Brigade, the Suleiman Shah Brigade, the Sultan Murad Brigade, all part of this big gang that Turkey has named the Syrian National Army) are kidnapping civilians to extort their families into paying ransoms. They are randomly detaining people, there is torture (one example is highlighted, of a minor being gang-raped and adult men being forced to watch it), looting and confiscation of property, you name it. Turkey also abducts civilians it accuses of working with the Autonomous Administration of Northeast-Syria, managed by Kurds and other groups in the region, and taking them to Turkey for prosecution.

Wouldn’t this be the time to keep the cameras shelved and join the armed forces to fight the occupation? Wouldn’t it make more sense to spend money on the armed resistance instead of on decors, costumes, and equipment? In January, I very quickly came to the conclusion: no, it wouldn’t be. The previous film, ‘The End Will Be Spectacular’, was about the city war that raged in Diyarbakir, Southeast-Turkey, in the spring of 2016, and the resistance of the youth group that was fighting the state. Many young people lost their lives. You could ask the same critical questions about that film. But the director of it, Ersin Çelik, told me: “We don’t mourn. We make films”.

The films are a fundamental part of the alternative society that the people are trying to build in the Northeast of Syria. It is radically opposed to the violent nation states that have been occupying Kurdistan for around a century now. The administration is decentralized, it focuses on equality between different ethnic and religious groups in the region (Kurds, Arabs, Turkmen, Assyrians, Yezidis, Armenians) and between men and women, and on direct democracy.

Culture is an inseparable part of that ‘revolution’, as Commune-member Diyar Hesso told me. Actually, Hesso made it bigger than just the revolution in Northeast-Syria. He claimed art to be the cornerstone of social progress and said: “Art shapes the identity and character of a nation. Because of art, we know what being in love is before we feel it. We hear about heroism, about the value of friendship, about sacrifice via films and literature. In that way, our films contribute to shaping the identity of the Kurds, which is recognized by our international friends as courageous, a willingness to sacrifice, anti-racism, qualities like that. This identity was shaped by a decades-long struggle”.

It doesn’t only work like that for the Kurds, of course. It works like that for Turkey as well. The cultural expression of the leading forces in society has helped shape the Turkish identity. The difference is, of course, that the Turkish state has shaped its people into identification with fierce nationalism, machoism, violence, contempt for minorities, a lack of respect for women, a lust for blood. Exactly the features you see playing out in Afrin (occupied by Turkey and its gangs since spring 2018) and Serêkaniyê at the moment.

At first, it may seem surreal to make a film about a great injustice that is going on just an hour’s drive away from the film location. Upon reflection, however, it is exactly the right thing for filmmakers to do. It will strengthen the Kurdish dedication to a safe and free life for all, and that is in the long run the best resistance against the mentality of those who try to destroy them – and who won’t succeed.

Kuzu: “It has been revealed that the state protects those" in the Kiziltepe JITEM trial

Another film to resist the mentality of destruction

Kuzu: “It has been revealed that the state protects those" in the Kiziltepe JITEM trial