A Turkish prosecutor claims Abdullah Öcalan is in good health, lawyers demand to see him in person

The Bursa Chief Public Prosecutor’s Office issued a statement 16 March two days after the allegations on the health and safety of the Kurdistan Workers’ Party (PKK) leader Leader Abdullah Öcalan began to spread over social media.

“It was understood that there were unfounded claims in some social media accounts stating that Abdullah Öcalan, who was jailed in the Imrali Type-F High Security Closed Penal Institution, had died. The prisoner is alive and in good health. It is respectfully announced to the public that such news should not be taken seriously,” said the public prosecutor’s office claiming that such claims on Abdullah Öcalan’s health were “unfounded”. 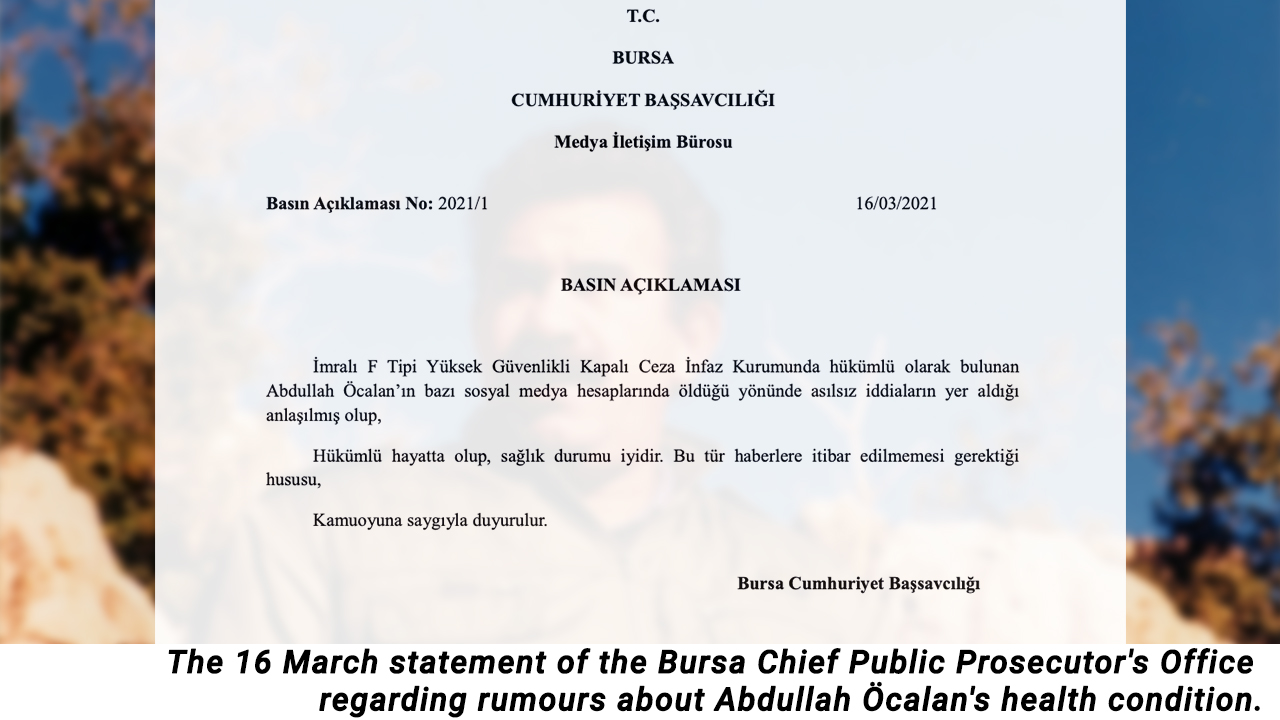 Response of the lawyers: We want to see our client in person

Following the statement of the chief public prosecutor, İbrahim Bilmez, one of the lawyers of Abdullah Öcalan said, “We want to see our client in person,.” sharing his comments with Mesopotamia Agency.

“In order make sure that our client is in good health and safety, why should we simply depend on a ‘written statement’ from the prosecutors? Is this ‘normal’ in a state ruled by law?” Bilmez asked.

“The isolation must immediately be lifted. Our client Mr. Öcalan and other inmates of Imralı should be able to use their basic rights defined by law. They should be entitled to be visited by their family members and lawyers and use their legal right to communication including phone calls and letters”, he said.

No news from Abdullah Öcalan since 27 April 2020

Rumours of Abdullah Öcalan’s death that circulated on social media on 14 March have lead to urgent concerns among his family and lawyers as well as among the Kurdish community, human rights and peace defenders throughout the world.

Abdullah Öcalan has not been heard from since 27 April 2020, when his brother was only able to speak with him over a short phone call.

The PKK leader was able to meet with his lawyers on 2 May 2019 after an 8-year ban on visits, following hunger strikes and death fasts launched with a demand to break the isolation imposed upon him.

After the 2 May 2019 visit, only four visits were then undertaken by his lawyers and were held on 22 May, 12 June, 18 June and on 7 Aug in 2019. Then the bans on visits to Imralı Island were reintroduced as his lawyers have not received any responses to their formal legal applications to visit Abdullah Öcalan ever since.