A short history of Newroz celebrations by Kurds in Turkey

In the 52 years that followed the first celebration of Newroz in a political context in the district of Silvan, the 21st of March is now the day for a fresh leap towards emancipation for millions of Kurds who are denied recognition of their social identity in Turkey.

As preparations have begun, in various Kurdish-majority cities and districts in Turkey, for the celebrations of Newroz -the arrival of New Year on the day of the spring equinox – the song that will be highlighted in this year’s events has also been selected.

Newroz celebrations with a political context in Turkey have a history of 52 years for the Kurds, although the tradition goes many, many years further back.

The first Newroz celebration, organised by Kurdish political groups, was staged in 1970, in Turkey’s Kurdish-majority district of Silvan (Farqîn) in the province of Diyarbakir (Amed).

The first Newroz in Istanbul was organised in 1979, with only about 1,500 people participating.

In 1982, Mazlum Dogan, a founding member of the Kurdistan Workers’ Party (PKK), took his own life on the very day of Newroz in protest against the cruel treatment of political prisoners in the notorious Diyarbakir Prison.

In 2015, merely months before the historical elections victory of the pro-Kurdish opposition, millions now flooded into celebrations in Diyarbakir and other Kurdistan-majority urban centres, as well as in Istanbul and other major western cities of Turkey with large Kurdish populations.

The legend of Kawa the Blacksmith

The Kurdish and Persian legend of Newroz depicts the story of Kawa the Blacksmith who led a rebellion against the ruthless foreign ruler, Zahāk. It marks the awakening of both the people and nature. 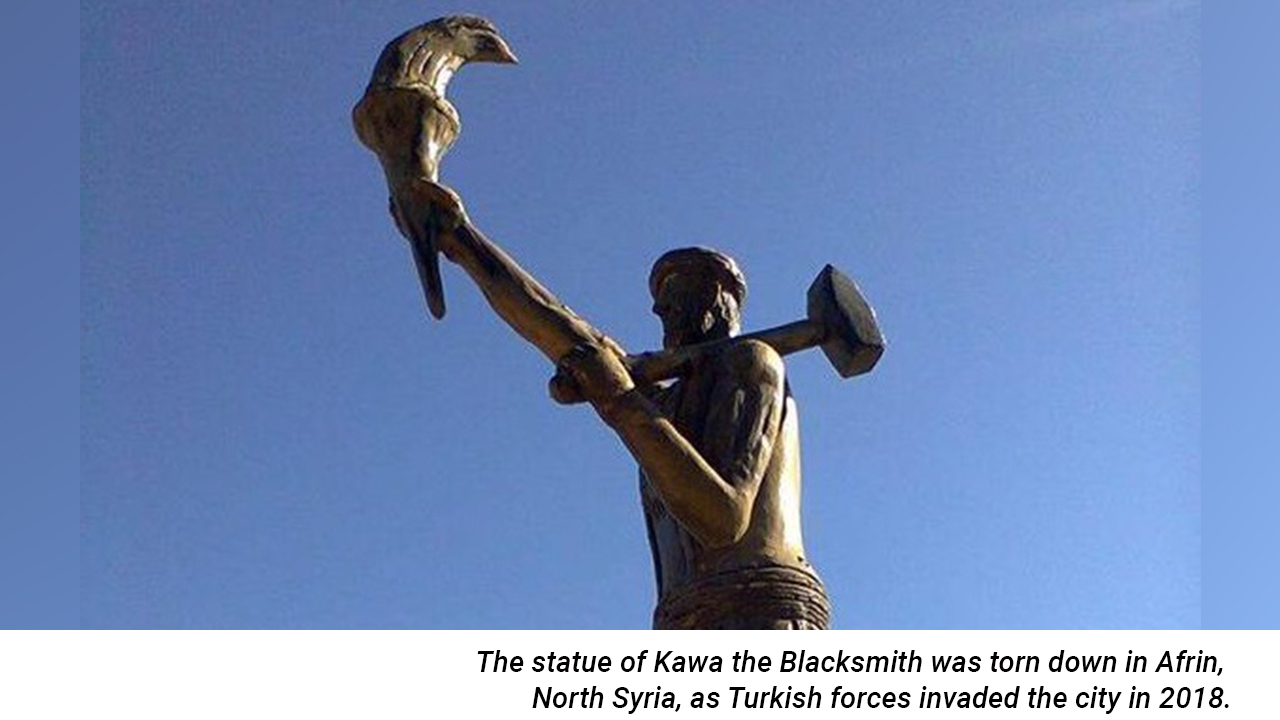 As Kurds have associated the spring equinox with an uprising for emancipation, and since Turkey’s official policy always focused on the denial of any social or national identity except for the official one, and on assimilation and forced transformation, this conflict manifested itself in the official Turkish ‘Nevruz’ celebrations, usually in suit-and-tie by government officials.

The more traditional emphasis on the importance of the spring equinox can be traced back to the times of the Assyrian Empire, a major ancient Mesopotamian civilization that existed as city-states between 21st century BC and 14th century BC.

First hints at a celebration on the spring equinox are found in the Zende Avesta, the book of Zoroastrianism.

Newroz banned alogside other Kurdish rituals after foundation of the republic

With the fall of the Ottoman Empire and the rise of the Turkish Republic in the 1920s, Kurdish culture, language, and rituals were suppressed in the process of building a new ‘Turkish’ nation-state.

By 1924, all Kurdish schools were shut down and publications banned. The words Kurd and Kurdistan were removed from history books and instantly censored in the mass media. The following year, a ‘Report for Reform’ extended the bans. Consequently, the names of Kurdish settlements were replaced with fabricated Turkish ones in par with the 1934 ‘Resettlement Act’.

Bans on Kurdish names for individuals, on traditional Kurdish dresses and colours, and even on the celebration of Newroz followed.

Newroz this year is planned to be celebrated in 72 cities and districts on various dates. This year’s motto will be, ‘Time for victory’, or ‘Dem dema serkeftinê ye’.