‘A revolution within a revolution:’ Women’s Struggle in North and East Syria

If North and East Syria is famous for one idea, it is its unrelenting commitment to women’s liberation.

Images of the women fighters of the YPJ and SDF on the frontlines against ISIS became famous around the world. Concepts that form the basis of political and social organization there—autonomous women’s institutions in every area of life, a co-chair system for leadership—would be unthinkable in so-called “advanced democracies.”

But how does a women’s revolution begin? How does it get stronger under conditions that, historically, have sidelined and weakened women’s struggles? And how do women revolutionaries see their future after 10 years under attack?

There is no one answer to any of these questions. Speaking to women across North and East Syria last year, I found parts of many answers—and a sense of sheer determination unmatched anywhere else.

A History of Struggle

The fight for women’s liberation in North and East Syria has deep roots. The Kurdish freedom movement built a strong social and political base among Syrian Kurds throughout the 1980s and 1990s. Some Syrian Kurdish women joined the guerilla forces and fought against the Turkish military on the other side of the border. Others organized their own communities.

Women active in North and East Syria’s oldest women’s institutions cite this history as the reason for their success. Asked why women in Kobane were organized enough to resist ISIS in 2014, members of Kongra Star there emphasized to me that their organization had been working since 2005.

Kongra Star, which today is the umbrella organization for all women’s institutions in the region, was the first autonomous Kurdish women’s organization in Syria. Its activists educated Kurdish women about their rights and what they could do to achieve them behind closed doors, evading both the regime’s secret police and the scrutiny of conservative men.

In 2012, when regime forces were pushed out of Kobane, “people were already organized and knew the philosophy,” one Kongra Star member said. “Kurdish people, Kurdish women, were ready for anything. We no longer had to work in secret, and many people came to join us.”

The administrators of the Qamishlo Mala Jin, or Women’s House, told me that they had been politically active since 1989—“so when the revolution in Rojava began, we were ready.”

Women’s Houses provide shelter and mediation for women facing discrimination and violence. They also serve as centers for women’s social organizing, strengthening the mass women’s movement that forms the base of the revolution. 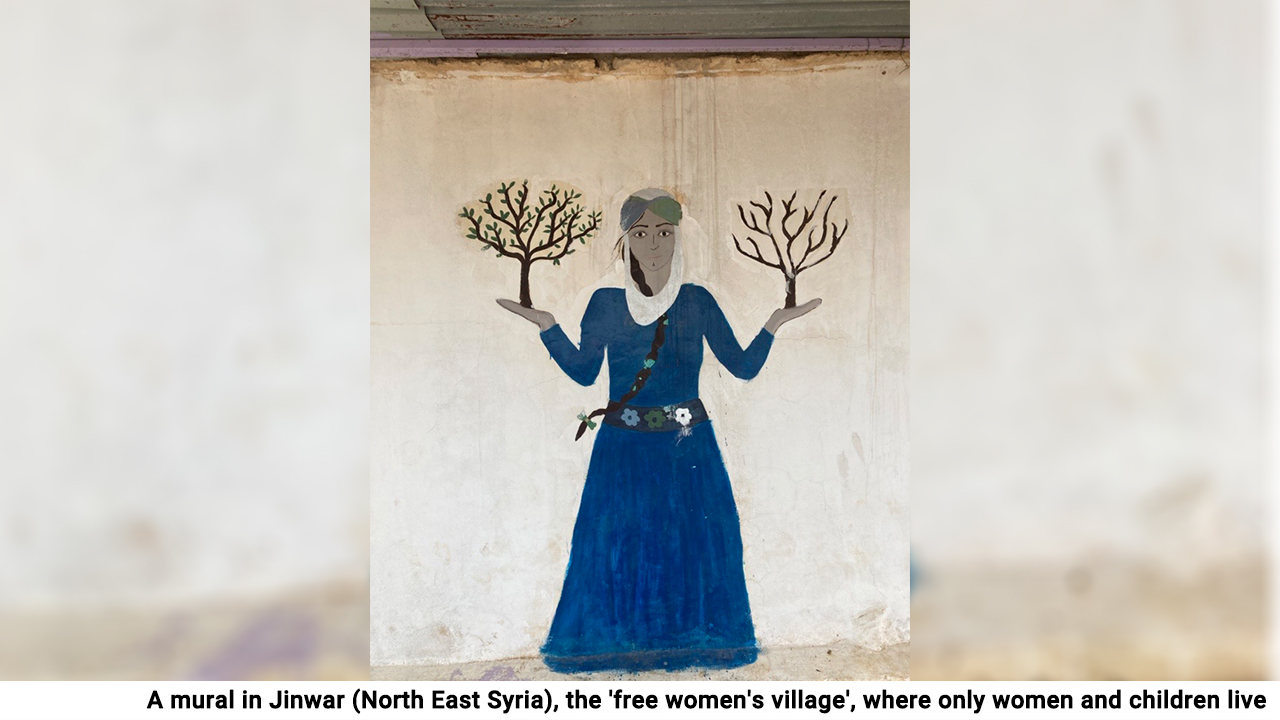 The Mala Jin in Qamishli was the region’s first, established in March 2011. Today, there are 72 across all of North and East Syria. Whenever a new city was liberated, women proudly told me on multiple occasions, the first institution the Autonomous Administration established was often a Mala Jin.

The ideas that formed the basis for these early women’s institutions and everything that followed them came from the Kurdish freedom movement as well—but today count women from many communities as adherents.

“We established our organization based on the philosophy of [PKK founder and leader] Abdullah Ocalan,” a Kurdish Kongra Star activist in Kobane explained to me, “because he says that society cannot be free if women are not free.”

In Manbij, an Arab woman who survived three years under ISIS occupation and became active in the local Mala Jin after the city’s liberation in 2016 said simply that “if we weren’t impacted by Ocalan’s ideas, we wouldn’t be here.”

Writing from prison, Öcalan famously argued that the source of all oppression in society is the oppression of women by men. This is the primary theoretical difference between the Kurdish freedom movement’s democratic confederalist philosophy and that of other national liberation movements, which traditionally center national or class oppression.

That difference likely explains some of North and East Syria’s successes. A movement that believes that women’s freedom is essential for all freedom will prioritize women—even during times when other comparable struggles would sideline them.

It is also an idea uniquely suited to a diverse country where women have suffered severe injustice at the hands of dictators, terrorists, and even their own families.

Kurdish, Arab, and Syriac women reiterated that the problems of women in Syria are often the same across ethnic and religious lines, making women’s liberation a unifying common struggle for the northeast and beyond. 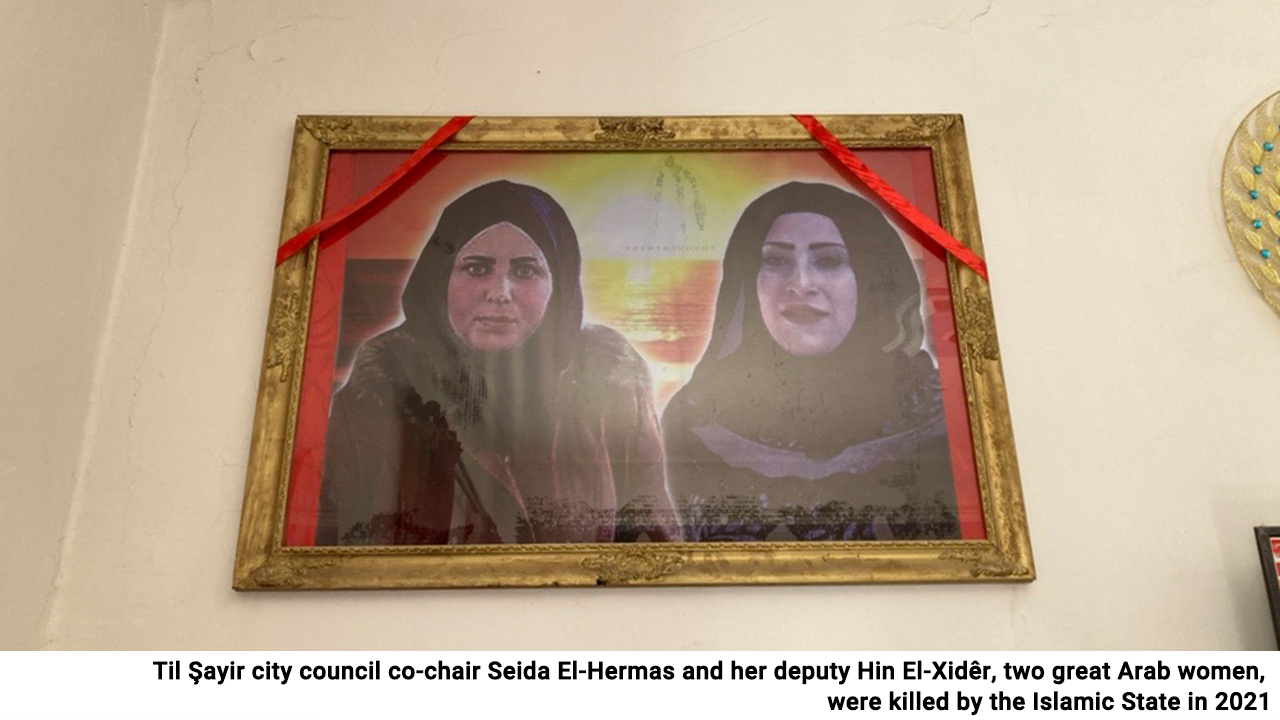 “Every woman has revolution inside her,” said a member of the Zenobia Women’s Coordination, an autonomous women’s organization representing North and East Syria’s Arab regions, at the group’s Raqqa headquarters.

Practical experience and revolutionary ideals do not mean that the struggle has been easy.

Turkey, ISIS, the Syrian regime, and opposition rebel groups, despite clashing bitterly on the battlefield, have been united in targeting the women who built North and East Syria’s revolution. As allies in this campaign of terror, they counted men who questioned whether women could fight and lead and denied opportunities to the women of their communities by force.

On the ground, it is impossible to forget just how high the stakes are. The faces of the women who gave their lives for North and East Syria’s revolution look down from roundabouts and billboards and the walls of homes and offices. 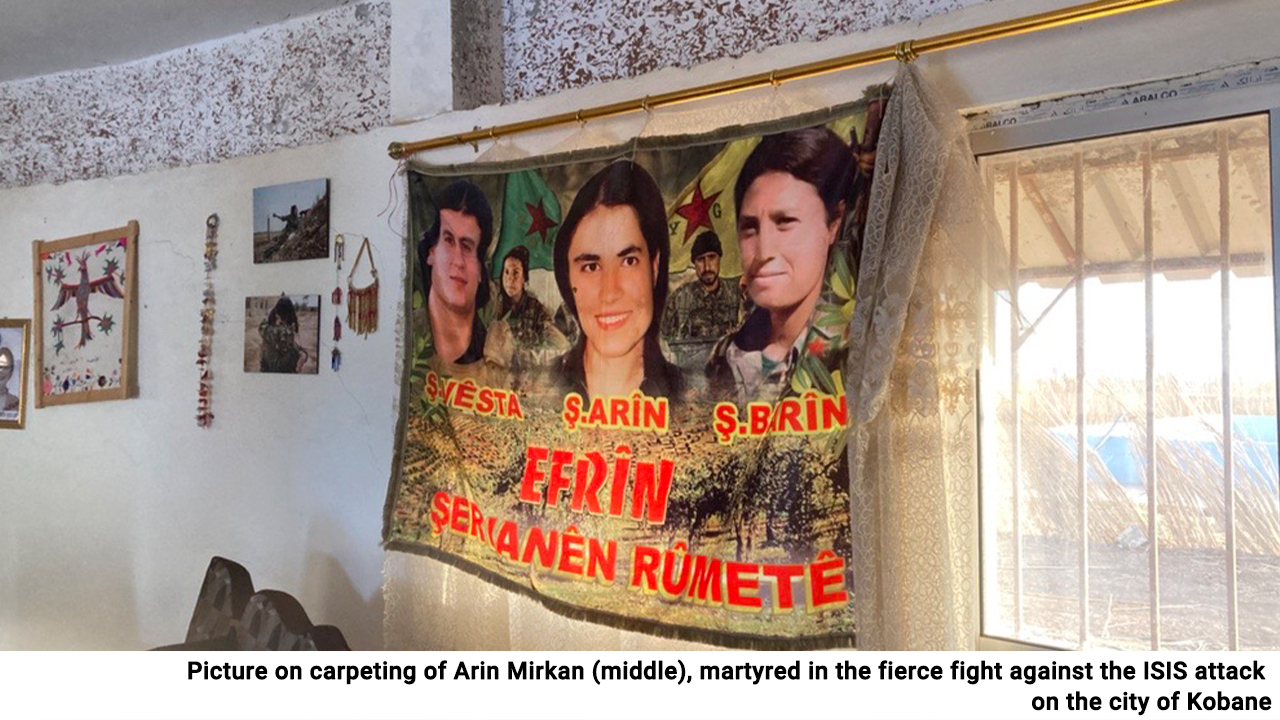 A park in Raqqa is named for Hevrin Khalaf, the feminist politician and activist murdered by Turkish-backed terrorists during the invasion of Serekaniye. The famous statue in Kobane’s Free Woman Square commemorates Arin Mirkan, who sacrificed her own life to save her comrades and destroy an ISIS position during the battle for Kobane.

Members of women’s organizations regularly mobilize when women are killed by men. They view male violence as inseparable from the violence of states and terrorist groups—something that ISIS rule and its lasting impacts on society made clear.

“There have been assassinations of political women. This doesn’t discourage us—it makes us stronger,” an activist with the Zenobia Women’s Coordination explained. “We won’t submit to ISIS or to those who want to break the will of women.”

“We as women are victims of our society. We have sacrificed a lot to liberate ourselves, to stop violence against us from foreign powers and from society alike. Look at the displaced women [from occupied Serekaniye and Efrîn],” said a member of the Qamishlo Women’s House. “They had families, children, homes, a democratic society—and now their lives have been overturned.” 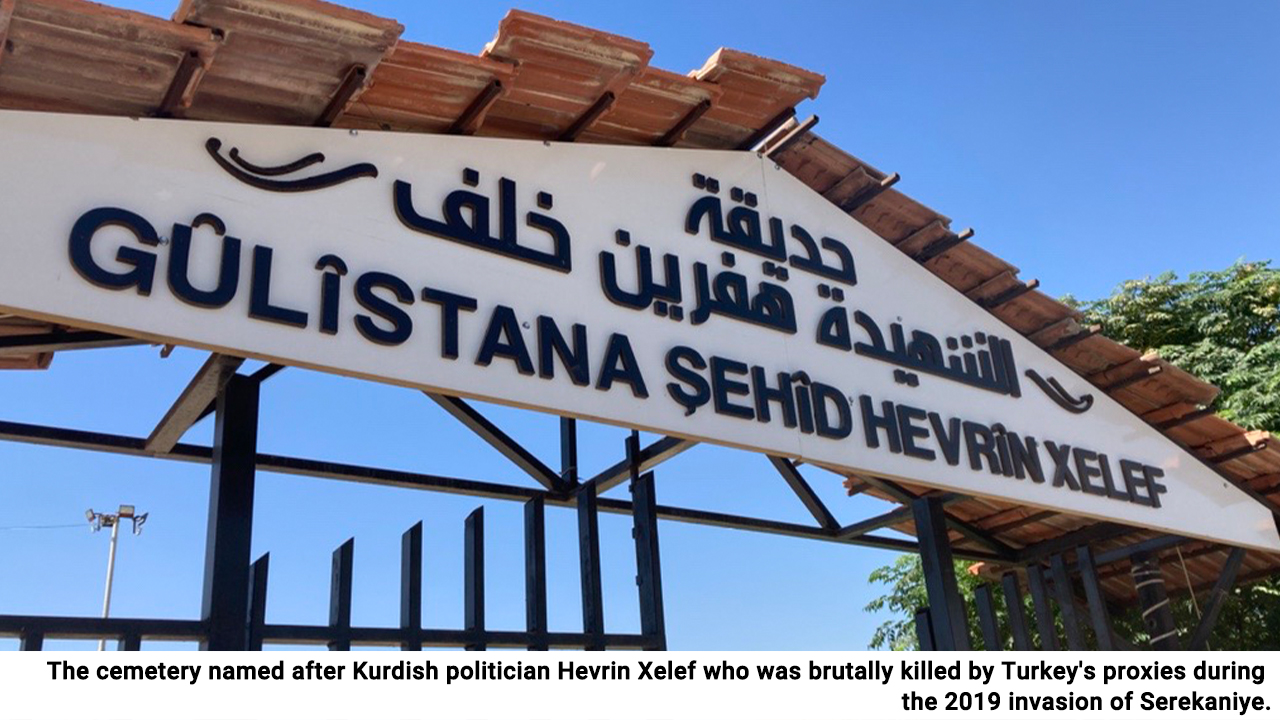 Listening to what women have gone through over 10 years of war, it becomes clear that every day that a woman taking part in any aspect of the revolution persists in her work is a victory—against military enemies and entrenched social forces alike.

It is impossible to eradicate thousands of years of patriarchy overnight. Women in North and East Syria do not claim to have done so. Their revolution has come a long way, but it is far from over.

In Raqqa and Manbij, activists are demanding the implementation of the same Women’s Laws implemented in Kobane, Afrin, and Cizire—including provisions previously seen as impossible to enforce in conservative communities impacted by ISIS’ ideology. They believe that they have done enough social and political organizing over the past several years to turn the tide.

Men and women are writing North and East Syria’s new social contract together. I spoke to multiple women involved in the drafting process as representatives of autonomous women’s organizations. All seemed hopeful that it would be stronger than the documents that came before it, and all felt that their participation was real and meaningful. 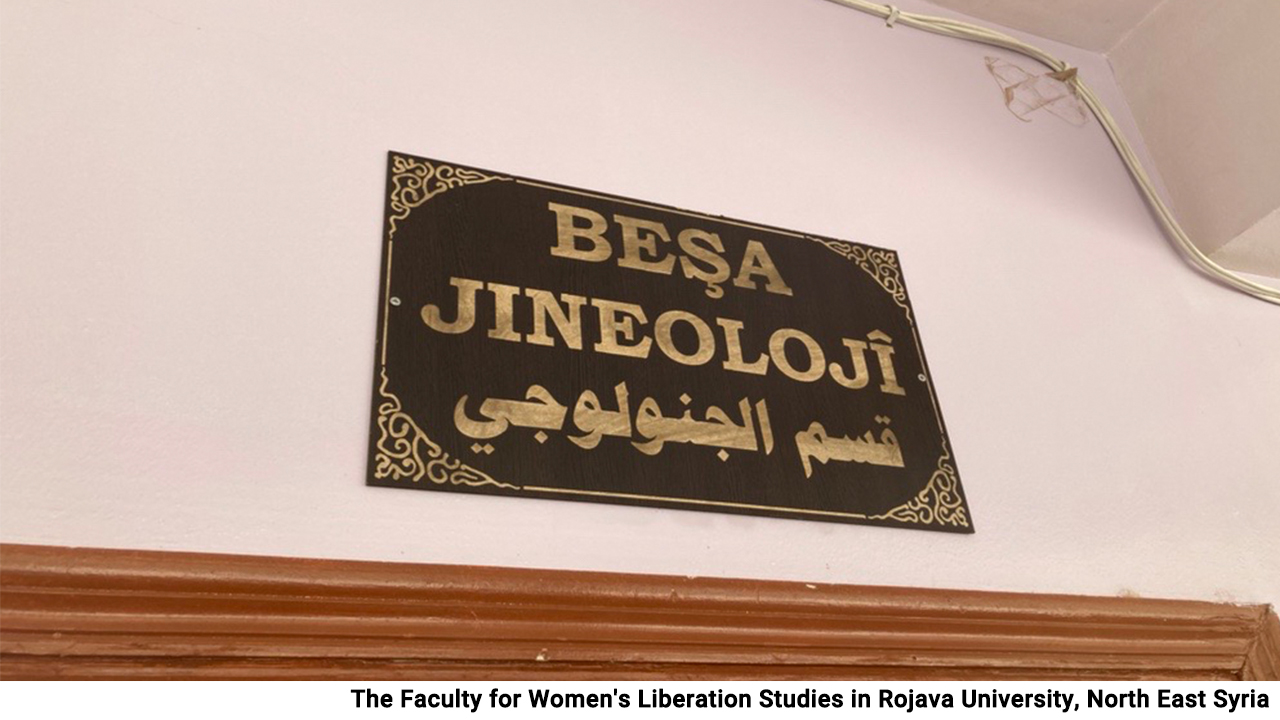 Women in the northeast also hope to share their experiences with their counterparts in other regions of Syria, across the Middle East, and around the world. Many of North and East Syria’s women’s organizations also have a presence in cities like Aleppo and Damascus, though the regime limits their activities. They cannot operate in rebel-held areas due to overwhelming hostility towards the AANES and brutal misogyny, but they maintain contacts with women from these regions.

Every woman I spoke to had goals for herself and for her organization—projects to expand, theories to put more effectively into practice, women who hadn’t yet been organized to reach. They also all know that North and East Syria remains impoverished, besieged and at war, making all of this work more difficult.

As North and East Syrias celebrates International Women’s Day today, I know they will be doing so in honor of every victory, every sacrifice and every future dream. Women everywhere—really, people who believe in freedom everywhere—must wish them success.