A portrait of an exiled journalist in her own land: Evin Buldan

Evin Buldan was only 27 years old when she died of a heart attack on 2 April 2017. Evin’s friends and colleagues have not forgetten her: they spoke to Jin News about her life and her dedication to her mother language and her homeland. “We will be the followers of her unfinished dreams”, her colleagues said.

Evin was a female journalist whose search for the truth made her follow in the footsteps of journalists like Gurbetelli Ersöz, Ayfer Serçe, Deniz Fırat and Nujiyan Erhan.

Evin was born in the Yüksekova (Gever) district of Turkey’s eastern province of Hakkari (Colemerg) in 1990.  Evin’s family was related to Savaş Buldan, a Kurdish businessman who was kidnapped and killed by eight people who were wearing police uniforms and who introduced themselves as ‘the police’ on 2 June 1994.

Evin’s family had to flee to the Federated Kurdistan Region in 1994 due to the increasing pressure that was being placed on Kurdish citizens in Turkey’s eastern and southeastern regions where many Kurdish villages were being depopulated and forcibly evacuated even as many Kurds were being ‘disappeared’ by ‘deep state’ forces.

Evin’s family settled in Maxmur Camp and she grew up under the heavy embargo that had been imposed on Maxmur Camp.

Returning to Turkey as a journalist 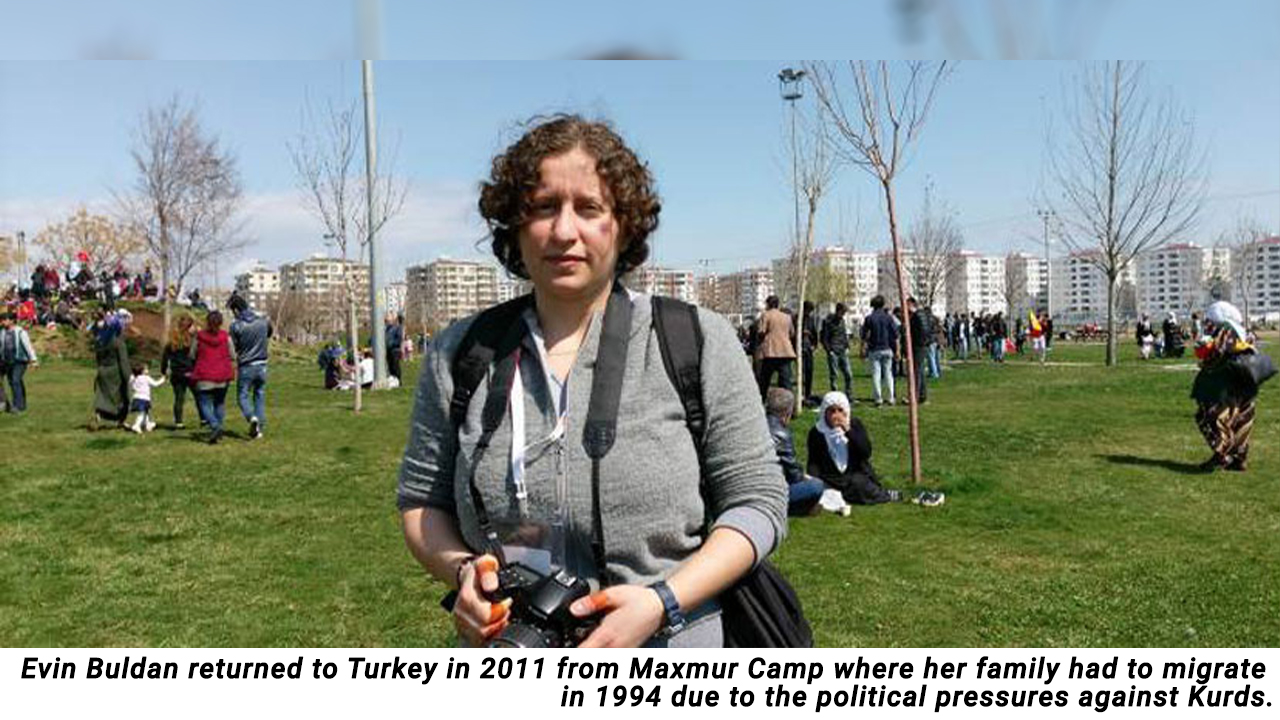 After graduating from the Department of Radio and Television at Selahattin University, Evin returned to Turkey and began to work as a journalist for Azadiya Welat (‘Free Country’) newspaper in Diyarbakır (Amed) in 2011.

After Azadiya Welat was banned and closed by a government decree, Evin started to work as an editor at Rojeva Media, where she oversaw and undertook significant journalistic work in her mother language, Kurdish.

”I write my news in Kurdish because we have to protect Kurdish. If we cannot protect our own language, we will have to accept the massacres, assimilation, destruction and occupation of our country”, she told her friends.

‘Evin became the continuation of the tradition of Apê Musa’

One of her friends, Ayşe Kara, observed that Evin was always a source of “hope and inspiration” to her and to all their friends, with her never ending enthusiam even under the harshest conditions. ”Our families knew each other because they lived in the same place. We were close friends with Evin. A new page opened for us after our arrival in Turkey. We worked together in Azadiya Welat for three years. Evin had a strong and faithful personality. She was a source of hope, morale and enthusiasm. Evin became the continuation of the tradition of Apê Musa (Musa Anter)”, she stated.

Kara also noted that Evin ”was not just a journalist. She was a female journalist and more sensitive to women’s news and women’s struggles than any of us”. They celebrated Newroz together in 2017. Ayşe recalls: ”She took a photo during Newroz 2017. With a camera hanging on her neck, that was her last photo and the last news she reported on. It was a rainy day in Amed that day. She said ‘take my picture’. For the first time, Evin asked us to take her picture. We took many photos together and Evin said goodbye to me that day”.

Evin has an important place in Kurdish press journalism, especially amongst women, Ayşe noted. ”She was a unique woman, a unique person with her morale and motivation. She used to speak in Kurdish everywhere. She was very sensitive about patriotism. She was a dedicated lover of Kurdistan. She was always in search of Kurdish culture and language”.

Elif Can Alkan was one of Evin’s colleagues and worked alongside her at Azadiya Welat newspaper in 2014. ”Evin was an exciting, dynamic person. She caught my attention with her smiling face and warmth. She used to speak in Kurdish everywhere and loved the Kurdish language intensely”, Alkan said.

“We worked together for four years. This is a good time get to know someone. I have witnessed how much she was dedicated in her use of Kurdish. She was also in love with journalism. She remained devoted to the Kurdish language and journalism till the end of her life”.