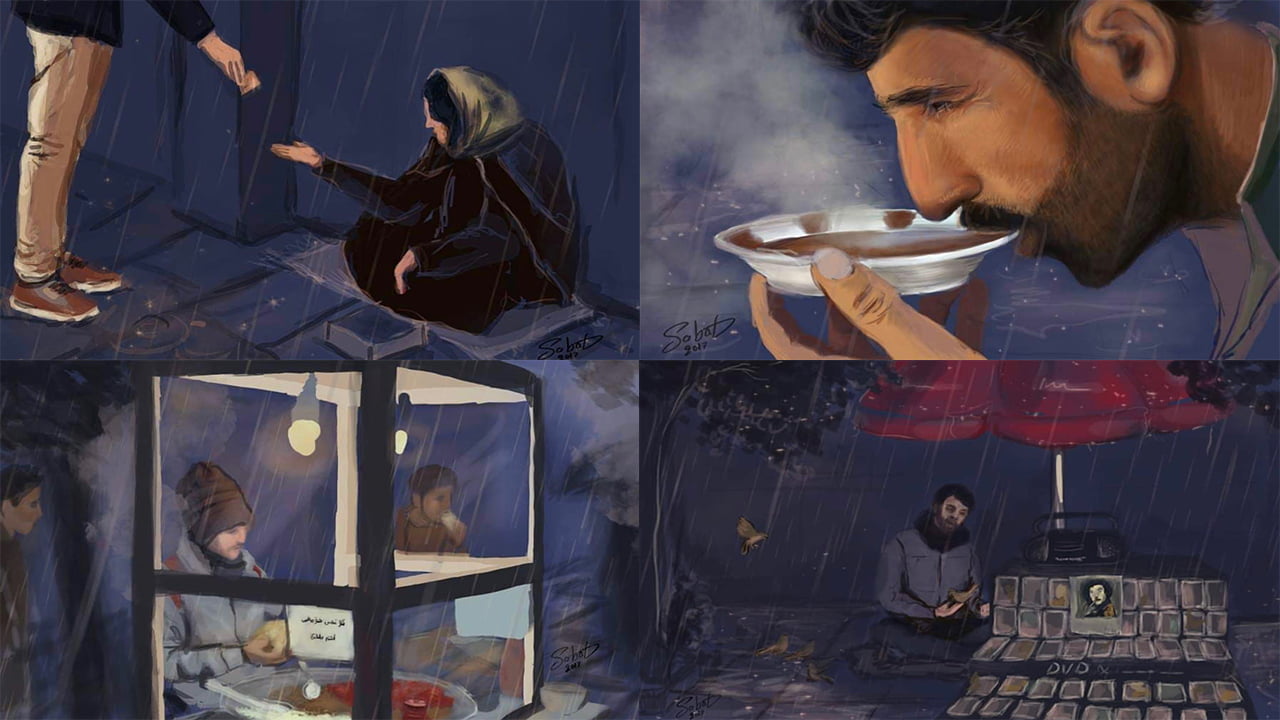 Sabat Ebbas is a young contemporary artist born in 1992 in Sulaimanyah, Kurdistan. She spends her days working on illustrated art pieces inspired by her city’s culture. “To me, art is about expressing the emotions and unseen views that we might not capture in our daily lives.” says Sabat.

“Avesta’s Smile,” one of Sabat’s pieces, is displayed in a cinema hall in southern Kurdistan.  The piece commemorates Avesta Veshkhapur, a young fighter from Women’s Protection Units (YPJ) who was killed defending Efrin from Turkish attacks in 2018. Avesta was born in 1998 in Efrin, and joined YPJ in 2014.

In an interview with MedyaNews, Sabat said “Avesta was a symbol of Kurdistan’s brave women, and so portraying  her in one of south Kurdistan’s cinema halls was an honor for me. The piece is still displayed at Cinema Salim.”

“I drew the graphic in front of the audience who came to join an event at the cinema about the resistance of Rojava fighters,”  she explained. 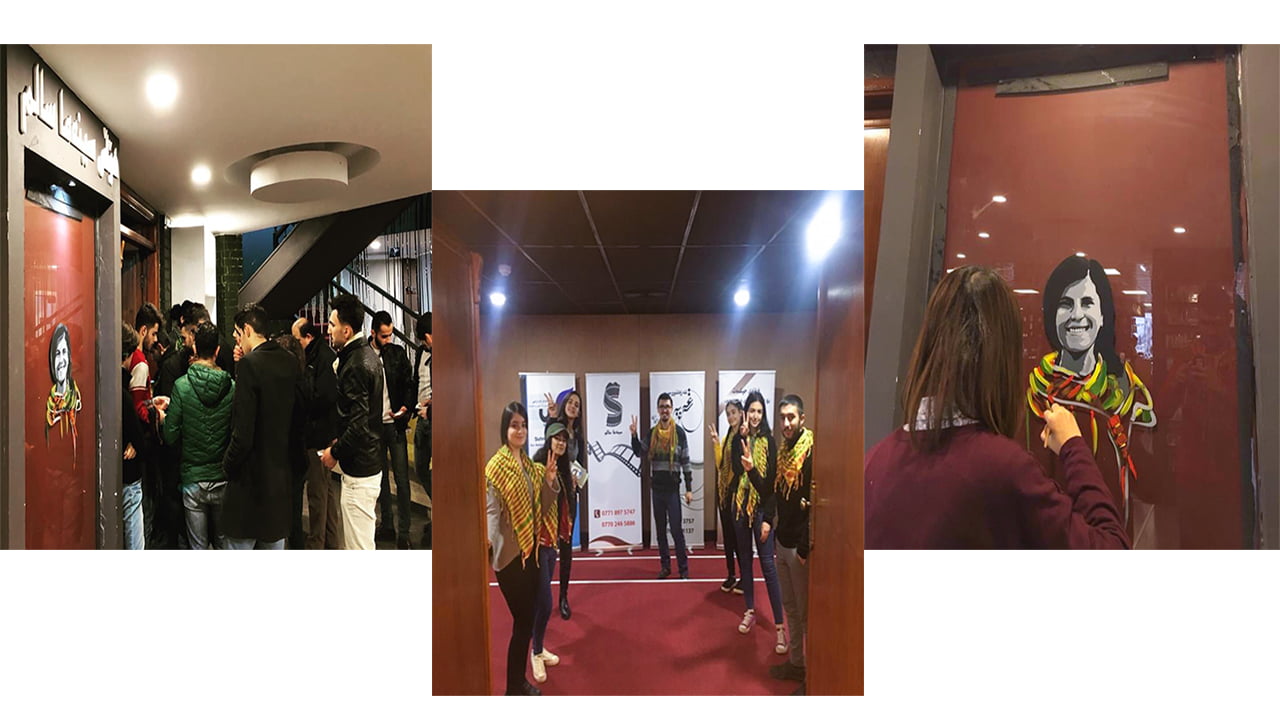 “A director from prison” is a series of illustrations of Yılmaz Güney published in DidiMn.com, a Kurdish cultural website. Güney was a Turkish-Kurdish film director, scenarist, novelist, and actor of Kurdish descent. Many of his works were devoted to the plight of working-class people in Turkey. 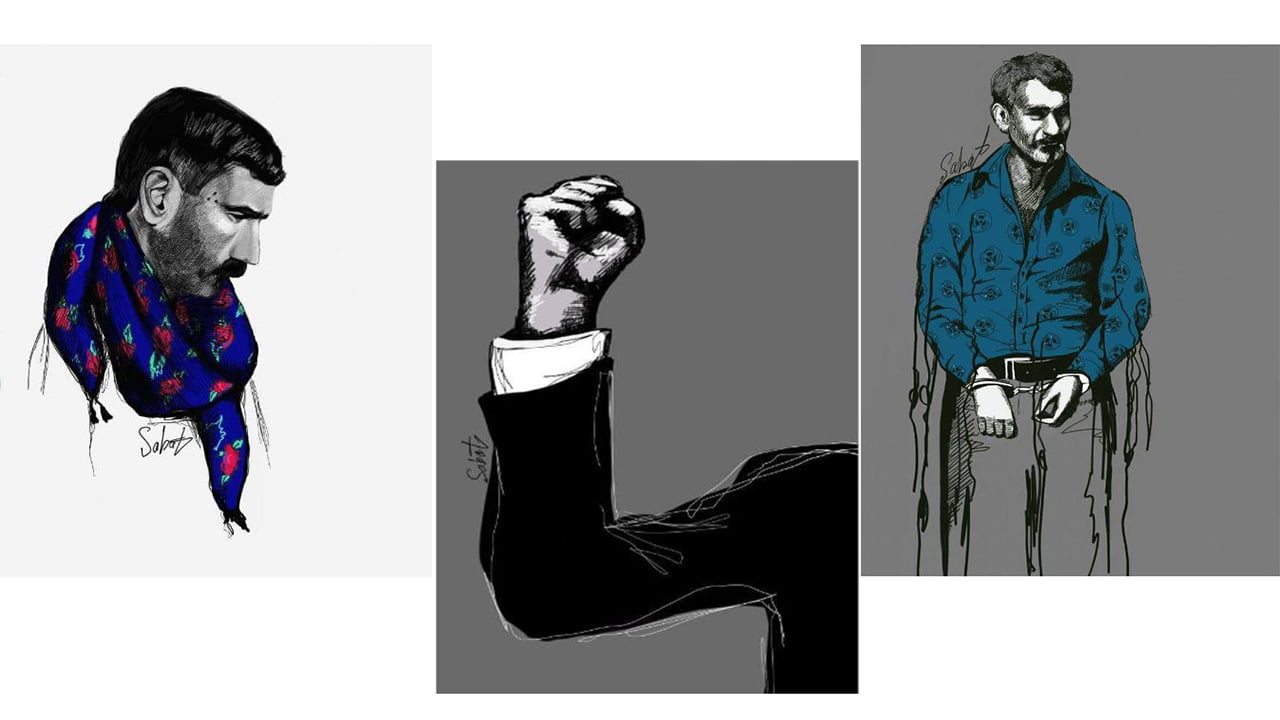 A director from prison – Yılmaz Güney

Sabat uses a lively combination between reality and imagination in order to engage her audience. “Love and Society,” another illustrated series, focuses on the emotions of two people in a relationship.  In these pieces, Sabat raises questions such as: what does each character feel or sense when they are in love? What do they feel when they fight or when they are in conflict with each other? What do they feel when they are on the edge of separation? “I draw both characters separately to express their unexpressed emotions,” Sabat noted 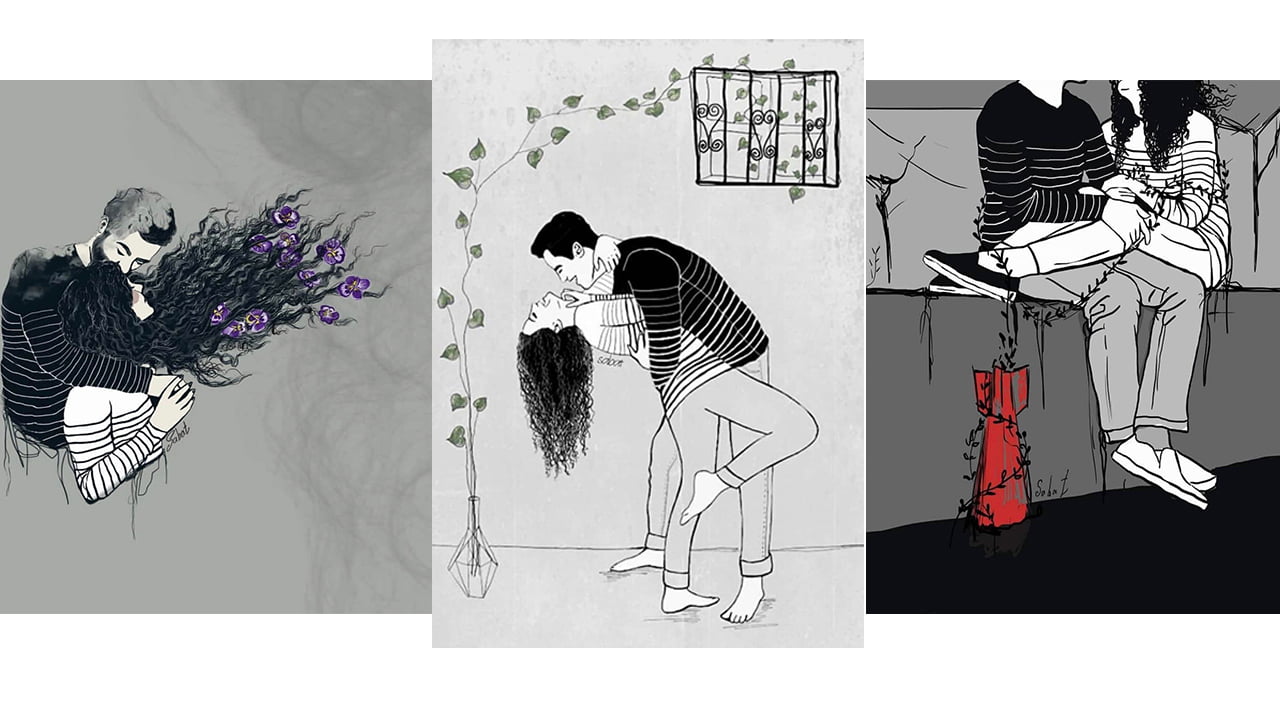 “Kurdistan has the kind of society where we fight in public but make love in secret. Young girls hide their inner feelings towards the persons they love for the sake of not getting killed by society — parents, brothers and relatives,” said Sabat.

“I try to draw love,” she continues, “in order to show people the innocence and the pureness of love. I want to introduce love to them, and them to love.” 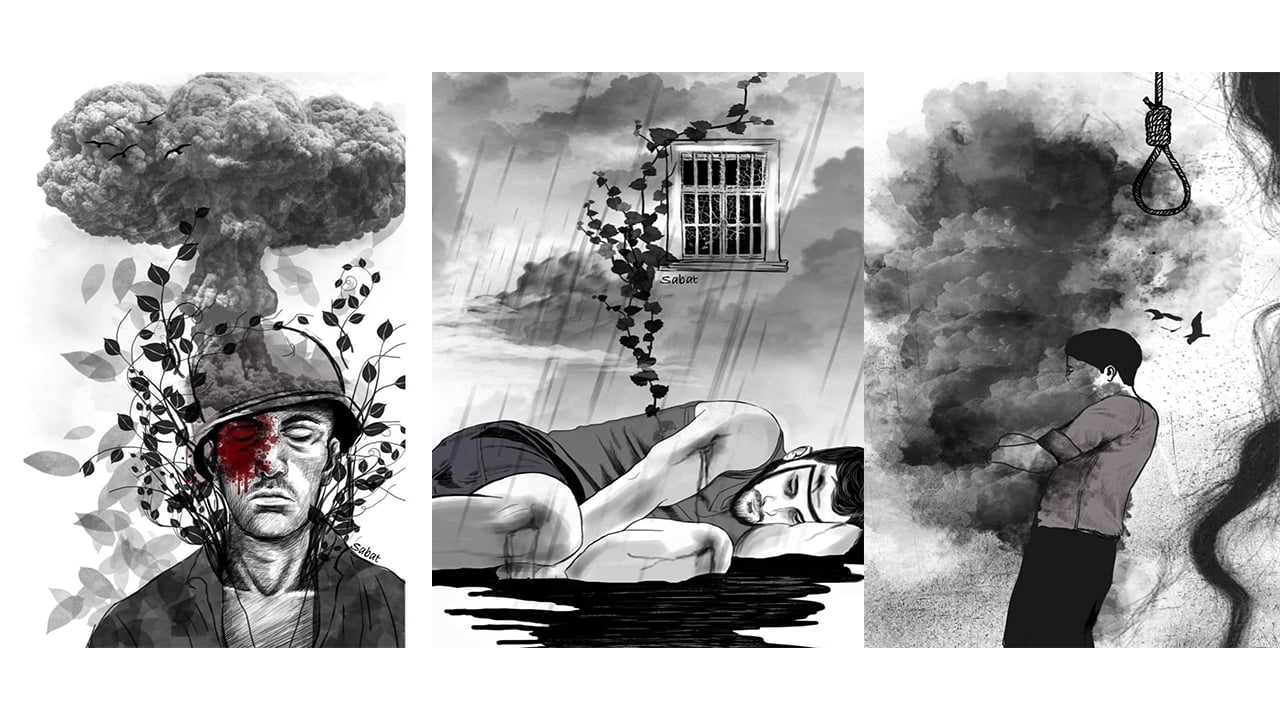 In Zhian, another illustrated series, she tried to capture Salim street.  Salim street is a popular destination in Sulaymaniyah. Workers, tourists, young people and others flock to the street to eat, drink tea and coffee, or spend time with friends.

She wanted to document the street and its social image through art so that the new generation would have a developed example of how the street was back in our era.

“One of the challenges I faced while I was working on the illustrations was that I had to draw the chairs, food carriages and small details of the shops—but during that time, the governor made new rules to take off all the chairs and food carriages in order to increase the size of the crowd.”

Sabat draws poetry just like she draws these views. She captures a couplet, a line, or a word from a poem and turns its themes into illustrated pieces. Sherko Bekas, a well-known Kurdish contemporary poet, is her Ideal poet to draw. 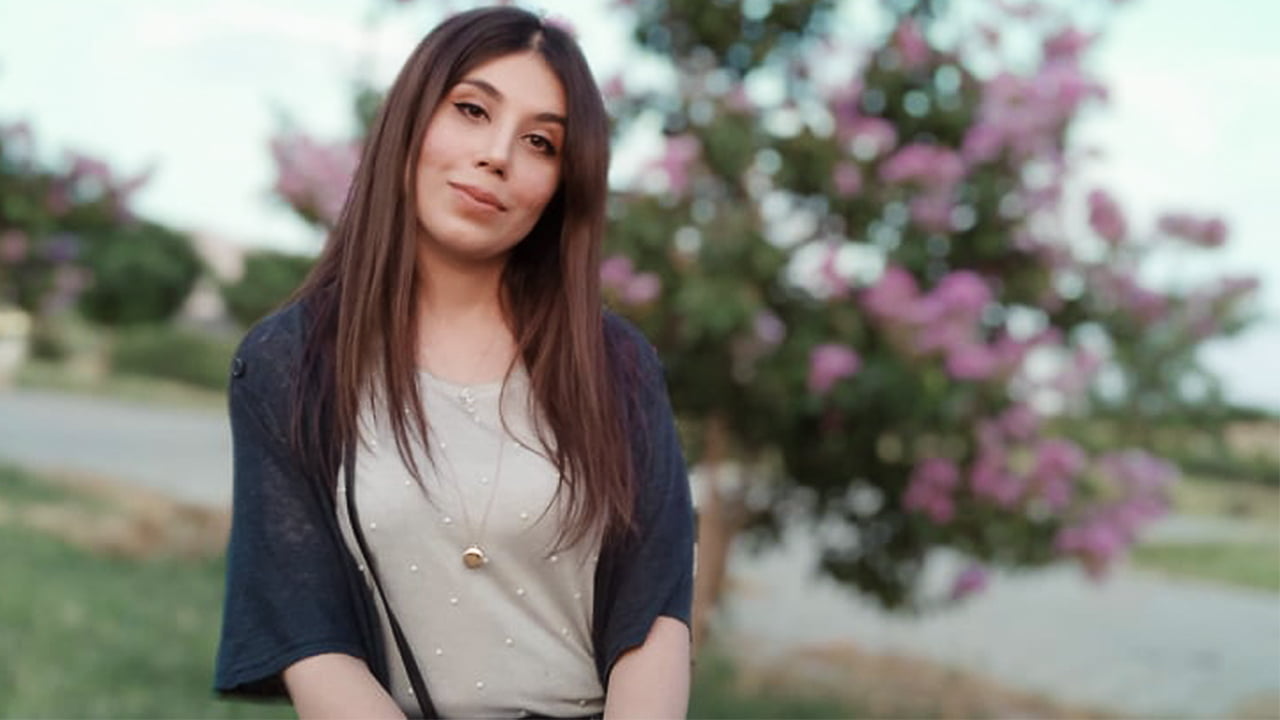 Sabat holds a degree in Fine Arts from Sulaymaniyah University.. She currently works as an art teacher.. She went beyond the society’s expectation of how a woman should work and what academic degree to achieve: “In the eyes of my society, if a girl studies at a Fine Arts college or institute, she will not have a good reputation,” she explained to MedyaNews. “But I still did it.”