A delegation consisting of Kurdish volunteers make contact with several NGOs in Bern to form an independent committee to investigate the worrying and consistent reports coming from Iraqi Kurdistan regarding the alleged use of chemical gases against Kurdish fighters.

Volunteers from the Kurdish Society Centre of Bern and Mizgin Women’s Assembly, both based in the Swiss capital, formed a delegation to initiate a process in Switzerland to act on the claims of Turkey’s use of chemical weapons.

Turkish warplanes have been reportedly bombarding civilian settlements directly, and many houses have been demolished as a result of the attacks.

Many villages have been evacuated in the region as a result of Turkey’s airstrikes. New military bases have been built by Turkey in the evacuated areas, reportedly with the approval of the Kurdistan Democratic Party (KDP). Two delegates from the Defend Kurdistan Initiative previously told Medya News that Turkey has been bombing civilian regions as part of their campaign that was supposedly launched to hit PKK zones.

In addition to the serious reports of bombing of civilian areas, increasing numbers of appeals have been made by top PKK commanders and executive members of the Kurdistan Communities Union (KCK) to the international community for their reports of Turkey’s use of chemical weapons and toxic gases against Kurdish fighters to be acted on.

The Bern delegation, which brought Kurdish activists together in light of these developments, has held a few meetings with several NGOs, human rights organisations and political parties in Bern since Monday. 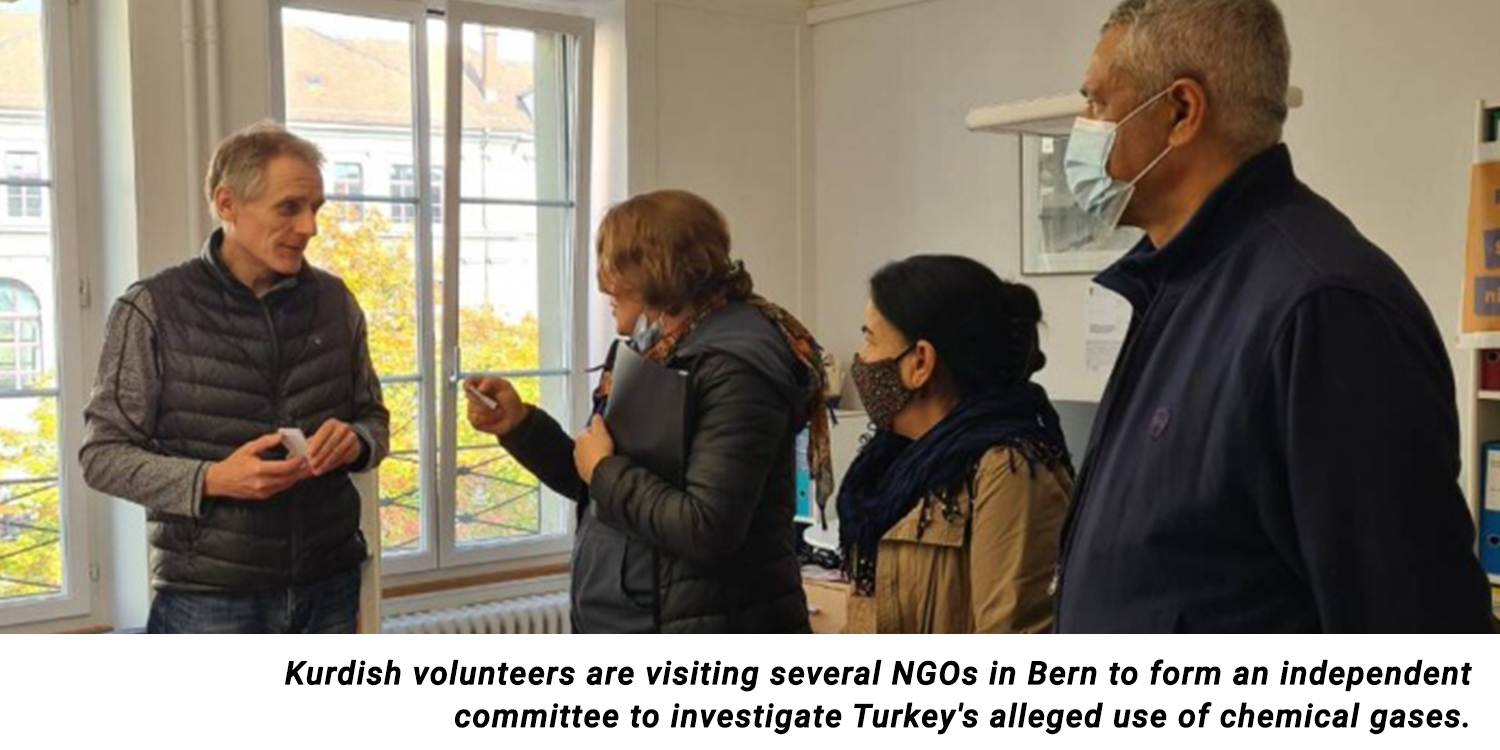 Amnesty International’s Bern Office, and the Head Office of Swiss Red Cross are among the organisations visited by the delegation.

The Kurdish delegates handed out a report to the institutions that consisted of a file of all the claims and reported incidents from Iraqi Kurdistan of Turkey’s use of toxic gases or any attacks that have raised the suspicions of the use of any chemical compound.

Reports suggest that chemical weapons or white phosphorus were used by Turkey in an attack to a village in Zakho on 4 September, as a result of which three members of a family were admitted to hospital showing symptoms consistent to those that would be present after exposure to chemical compounds, according to Christian Peacemakers Team (CPT).

There was a report which included photos of an unexploded Turkish military explosive device with the words ‘ammonium nitrate’ stamped on it, allegedly dropped from Turkish army helicopters on 19 May in the Zap region.