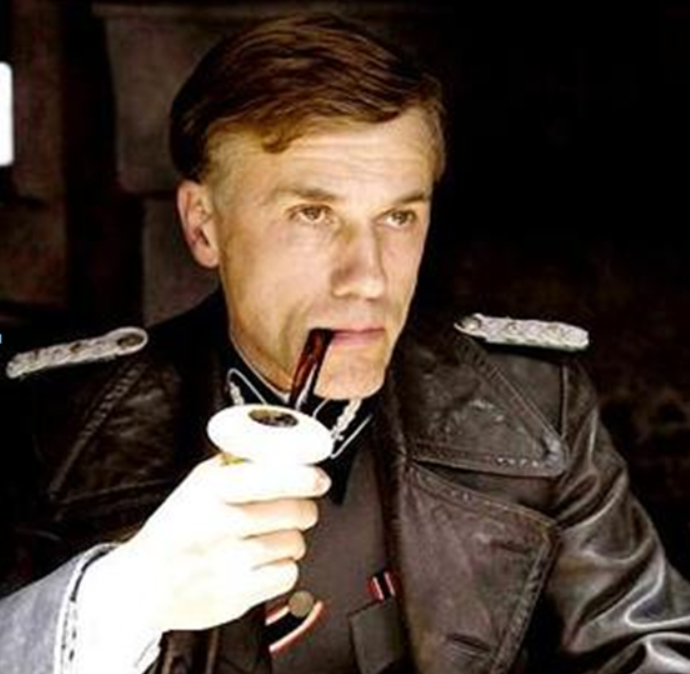 The main character of Inglourious Basterds is neither Lieutenant Aldo Raine (Brad Pitt) nor any other member of the gang; what is being told is actually the story of the antagonist or ‘super villain’ Hans Landa. The film’s creator, Quentin Tarantino, calls Landa “the greatest and most difficult character I’ve ever written.” SS Colonel Hans Landa is a relentless ‘Judenjäger’. According to his own account, he can smell who is a Jew. The Nazis hunted down Jews not only in Germany, but in all countries where they had spread to. In all of Europe, no city, town or village that occupied by or under the influence of Germany was safe for a Jew. Those who tried to hide were caught and killed, the survivors were sent to concentration camps, and those who hid Jews were punished in various ways. In order to become a target of Nazi persecution, one needed no other reason than to be a Jew. In the film, Landa plays the fascist tasked with ‘cleansing’ France. He constantly and persistently hunts Jews as if it were an artform.

The world watched in amazement as civilised European countries fell under Nazi control one after another, and with shock at how quickly these societies, from the highest echelons of bureaucracies and upper class circles to the most destitute communities, dissolved and capitulated to Nazi authority. 20th century historians observe with horror how in the cradle of democracy and civilisation it became possible for people to sacrifice their friends, neighbours and colleagues in the name of self preservation and personal interest. This mentality of mass surrender was undoubtedly responsible, possibly as much as fascism itself, for driving millions of people into an unprecedented wave of persecution and mass murder simply because they were Jews. The peoples of Europe, doomed to bear this burden of conscience for generations, have moved towards the future, creating institutions and mechanisms to avoid once more falling into this collective complicity. Inglourious Basterds is just one of thousands of products of the widespread and intense artistic-cultural creation involved in this showdown of conscientiousness.

Being Jewish was reason enough to become a target of fascist terror wherever the Nazis were able to reach in Europe. First, lists of names were drawn up of people the German authorities wanted handed over to them. Then the hunt would begin.

According to the media under his control, Turkey’s Erdoğan administration has returned from the NATO summit with a great victory. The main proof of this success is the joint declaration signed with Sweden and Finland. As a requirement of this agreement, ‘terrorist’ lists were drawn up and delivered to the authorities of the relevant countries. “They sent three or four of them right away, but we want them all,” says Erdoğan gleefully. The press and media applaud this. Finnish and Swedish officials turn around to concede that they will ‘fulfil Turkey’s demands’ straight after their initial statements that, “We did not bow to Erdoğan,” and ‘We are committed to continue our aid to Rojava”. There are rumours that Swedish intelligence has made a list of Kurdish politicians whom they are ready to extradite. Encouraged by all this, the Turkish Justice Minister exclaims, “We will prepare new lists.” Erdoğan repeats: “If Finland and Sweden refuse to hand these terrorists over to us, the Turkish parliament will not approve their NATO memberships.”

The Turkish opposition nationalist ‘left’, on the other hand, criticises Erdoğan by stating that no concrete results have been achieved, that the extradition of the ‘terrorists’ is left to the decisions of local judicial authorities and that sufficient decisions have not been made to cut support for Rojava. They also emphasise that the ‘terrorist threat’ will not disappear unless similar lists are sent to the rest of Europe, such as Germany, the Netherlands, France and the UK, where there are far more Kurds than in the two countries in question. In other words: Erdoğan has failed to be enough of a Hans Landa.

In fact, Erdoğan’s pragmatism and Landa’s opportunism are quite similar. As frequently mentioned by the opposition, Erdoğan has displayed remarkable U-turn performances on many issues, from the Pastor Brunson case to the Khashoggi murder. Similarly, when the tide of the war turns against the Nazis, Landa switches sides and helps the Allies assassinate Hitler and the Nazi Party elite. But being a Kurdenjäger or the ability to switch sides isn’t enough to be another Landa: Landa is ruthless, arrogant and rude, but can also be circumspect, polite, and even charming. Besides being a native German speaker, he is also fluent in French, English and Italian. The similarities between the two characters, therefore, have tangible and obvious boundaries.

Eighty-odd years after the Nazis’ ‘Jewish hunt’, there is a high probability that a ‘Kurdish hunt’ will begin in Europe. No longer will any corner of Europe be safe for Kurds. The scale of the realisation of this possibility is directly proportional to the degree of misery of liberal democracy and the fragility of European values.

Spoilers for those wondering about Landa’s fate: He saves his skin and gets rich, but is doomed for the rest of his life to wear a long fringe to hide the swastika carved on his forehead by the Basterds. Once one is branded a fascist, no matter how much he U-turns, he is doomed to die as a fascist.