“Sedat Peker’s disclosures have brought the 1990s back onto the agenda. The Özgür Ülke newspaper was among the targets bombed on the orders of then Prime Minister Tansu Çiller,” writes Hüseyin Aykol for Yeni Yaşam.

Özgür Ülke, a daily newspaper printed by Turkey’s free press, went into publication on 28th April 1994. Its predecessor the Özgür Gündem had received great acclaim as it had managed to report on matters other newspapers did not want to or were afraid to cover.

The Özgür Gündem newspaper persisted in its aims even though its reporters and distributors were often attacked and a large number of its employees including the venerable journalist Musa Anter (72), were killed. It was closed down by a court decision on 14th April 1994.

Two weeks later another team, intending to ensure that the Kurdish people and democratic circles were not bereft of newspapers to read, started publication of the Özgür Ülke. As soon as publication started so did the harassment. Confiscation orders were issued for 220 out of 247 issues of the newspaper. Seven of the newspaper’s editors were arrested because of court cases initiated against them.

The oppression of the newspaper reached a peak on the night of 2nd-3rd December 1994. The technical centre of Özgür Ülke in Kadırga, Istanbul, its Çağaloğlu office and its Ankara office were all bombed simultaneously. Ersin Yıldız, a communications worker at the newspaper, was killed, and 23 workers were injured in the incidents, after which it was generally thought that the newspaper would no longer be able to function.

However, in one of the greatest demonstrations of solidarity our country has seen, various socialist magazines and newspapers opened up their offices to the Özgür Ülke. Thinking and liberal people grabbed their little computers and met up with any Özgür Ülke workers who were not either in hospital or in custody, and within a few hours a newspaper was prepared for the vendors for the following day. The socialist magazines cancelled their own publications that week in solidarity and made an announcement that their offices were “the property of the Özgür Ülke until they are in a position to bring out publications independently again”.

Recovery from the setback

The issue of the Özgür Ülke which reached the vendors on 4th December 1994 was only four pages long, but under the headline, “This fire will burn you too!” it explained the situation as follows:

“The voices of the highest authorities in the state were targeting our newspaper and looking for excuses to close it down, and it was one of the most important matters on the agenda of the National Security Council (MGK). Things said at the meeting when they decided to silence our newspaper reached the press, with no mention of the name of our paper. The final decision of the MGK relating to our paper became clear three days later when the Özgür Ülke was bombed.”

Workers from the magazines also came in every day to work alongside in solidarity. Writers opposed to the bombing of the Özgür Ülke reacted strongly in solidarity.

They expressed their opinions about the bombings in the columns of Özgür Ülke, and a large group including such esteemed authors as Orhan Pamuk, Ahmet Altan, Latife Tekin, Murathan Mungan and Lale Mansur actually manned a stall in Istiklal Caddesi, the main pedestrian throughfare in Istanbul, selling the issue with the headline “Stand up for your Ülke”. The police tried unsuccessfully to stop the writers selling the newspaper, claiming that sale of the Özgür Ülke was banned. 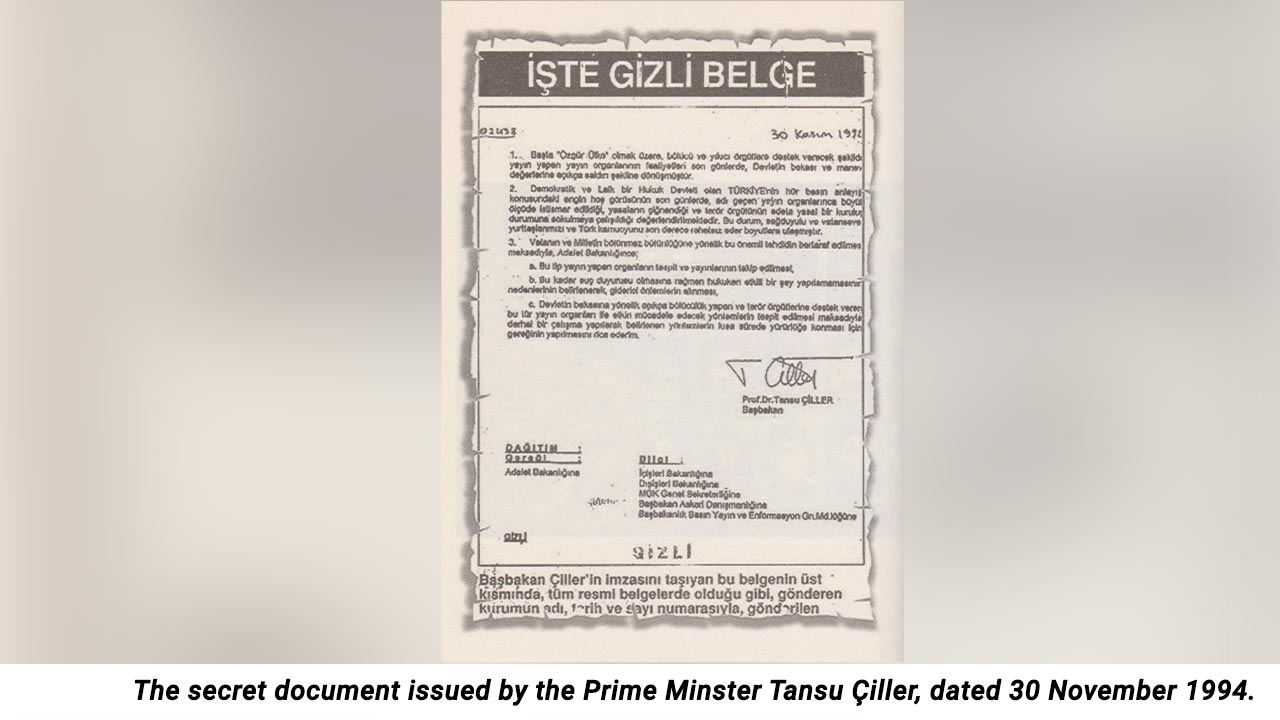 Below is the text of a secret document issued by the Prime Minster Tansu Çiller, dated 30th November 1994:

1. The activities of publications, in particular the “Özgür Ülke”, publishing in support of separatist and destructive organisations, have in recent days been openly attacking the permanence and ethos of the State.

2. It is evaluated that in recent days the aforementioned publications have to a large degree been taking advantage of the profound tolerance towards the free press exhibited by TURKEY, which is a Democratic and Secular Legal State, trampling on its laws and even attempting to legitimise the position of the terrorist organisation. This situation has reached a degree where our right-minded and patriotic citizens and the Turkish public are becoming extremely disturbed.

3. In order to eliminate this important threat to the indivisible unity of the Motherland and the Nation, I hereby request of the Ministry of Justice:
a. To identify publications of this type and place them under surveillance,

b. To identify the reasons that it has not been possible to do anything legally to stop this despite many official complaints, and take measures,

c. To take immediate action to determine methods of effective struggle against publications of this kind which are openly engaged in activities of separatism directed at the permanence of the State and which support terrorist organisations, and to do what is necessary to put these methods into action as soon as possible.

Three days before the bombing of the Özgür Ülke there was talk at the National Security Council (MGK) meeting of “silencing separatist publications”, and not two weeks afterwards the document signed by the Prime Minister Tansu ÇİLLER and marked ‘Secret’ was published.

The document mentioned the Özgür Ülke by name and said, “The activities of publications, in particular the “Özgür Ülke”, publishing in support of separatist and destructive organisations have in recent days been openly attacking the permanence and ethos of the State. In order to eliminate this important threat to the indivisible unity of the Motherland and the Nation, I hereby request of the Ministry of Justice … to identify the reasons that it has not been possible to do anything legally to stop this despite many official complaints” and gave the order to “do what is necessary”.

The document had been penned three days before the bombing. Government Spokesman of the time Yıldırım Aktuna treated the order to “eliminate” as if it was normal, and astonished everyone by saying, “they bombed themselves to put Turkey into a difficult position”.

The Özgür Ülke newspaper was closed down on a charge of being a continuation of the Özgür Gündem on 2nd February 2005, less than a year after it went into publication on 28th April 1994.