Kurdish fighter Fırat Şişman’s family speaks: He might be kept as a ‘hostage’ by the state

After it was revealed that Kurdish fighter Fırat Şişman was detained in a wounded state after an armed conflict, different family members were called by Turkish security officials and asked to “come and see Fırat”, but under one condition - that they had to go “alone”.

Fırat Şişman, a member of the People’s Defence Units (HPG), on 10 April was announced dead by Turkey’s Ministry of Interior after an armed clash in a rural region named Besta – between Şırnak (Şirnex) and Siirt (Sêrt) provinces – in eastern Turkey.

Later, however, the Minister of Interior Süleyman Soylu himself announced that the Kurdish fighter was captured “wounded”.

Şişman’s disappearance for over a month has raised concerns as to whether there is an attempt of ‘forced disappearance’ as his lawyers and family members are highly worried about his safety since they have not been informed by the state authorities regarding his whereabouts.

Medya News reached to the lawyers and family members of Şişman in an attempt to discover if there was any dialogue initiated by the Turkish state and if so, to ascertain the details of how the Turkish state authorities have been contacting them and what information has been shared with them regarding where the Kurdish fighter is being actually held. 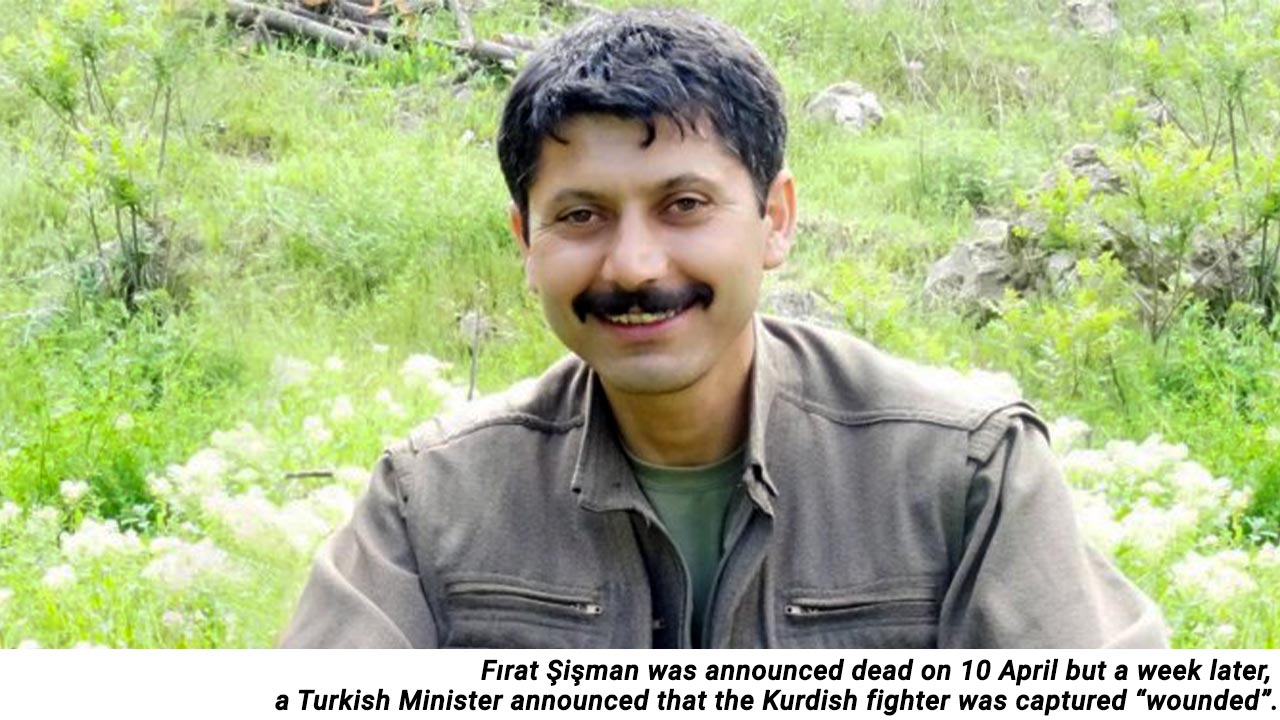 Fırat Şişman’s younger brother Mesut Şişman told Medya News that they have received several phone calls from people who introduced themselves as gendarmerie personnel or ‘officers working for the state’ and invited some family members to see Fırat.

“They call us and say: ‘Come and you can see your brother’, but they insist we go alone, not with lawyers. We are suspicious of such calls. A person held by the state would meet with his lawyer, but the lawyers are prevented from seeing him,” he said. 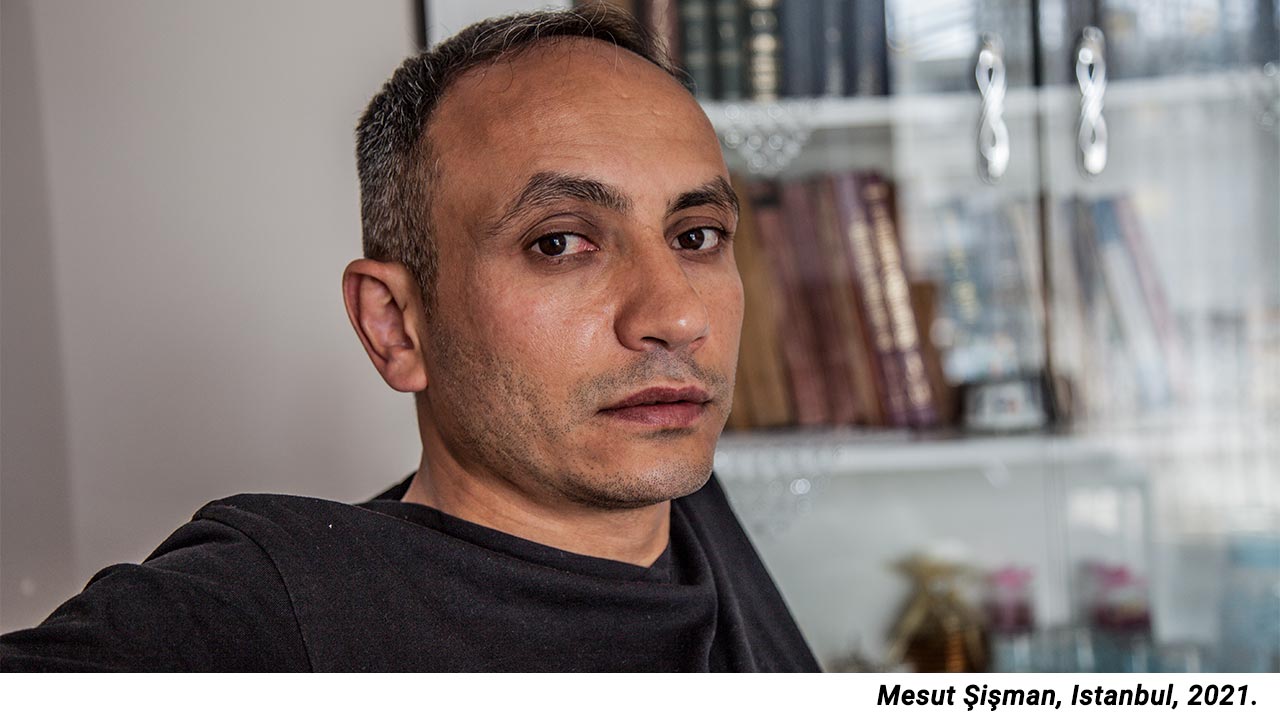 Mesut Şişman has already visited Şırnak with lawyers in an attempt to discover where his brother is being held so that he can see him. “If they have him, why do not let his lawyers see him? Why did they not let us see him when we went there? Why do they call us now?” he asked.

“This is a contradictory situation. This looks like he is in a hostage situation,” he said.

Concerning the family members who were called by those people who were presumably working for the Turkish state – since Fırat Şişman was announced “captured” in April – Mesut Şişman replies: “I was called, my father was called, my sister was called.”

Fırat Şişman’s older sister was also contacted by some police officers, who knocked on her door on 9 May. The police officers brought a document along with them to be signed by the sister, which reads that Fırat Şişman was “captured wounded” on 8 April 2021 and was “being medically treated in Şırnak State Hospital.”

The document informed the family that the Turkish state authorities had issued a decision to “appoint protection” to some family members of Şişman’s family, “as ruled by the Protection Services Regulations”. 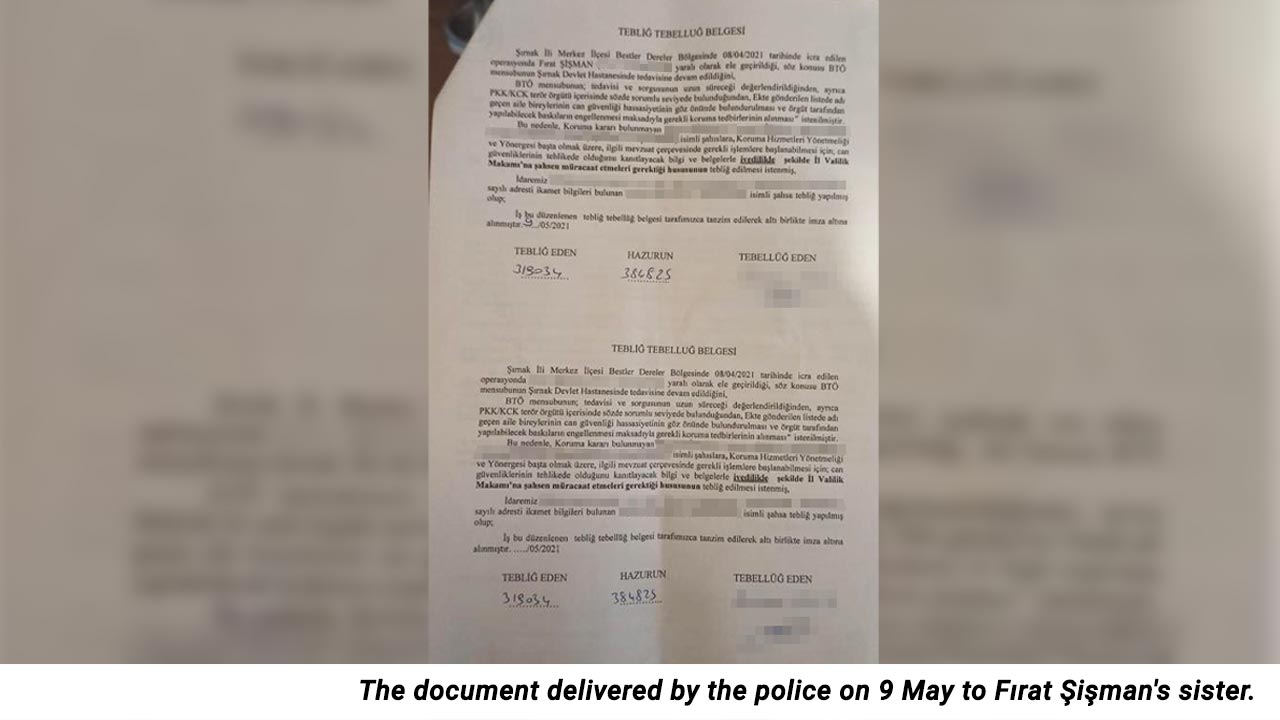 “The protection they offered involved a police car with officers in it waiting 24/7 in front of our home,” explained Mesut Şişman regarding the protection protocol. Mesut insisted that such state protection has never been demanded or requested by the Şişman family, but it was imposed on them.

“We do not need protection,” he said. “Who needs protection now is my brother. The state should protect Fırat Şişman, not us. We demand that Fırat Şişman be protected.”

A surprising statement in the document has raised concerns: it states that since Fırat Şişman is in a “responsible position in the PKK/KCK” (i.e., the Kurdistan Workers’ Party/Kurdistan Communities Union), his “treatment and questioning would take a long time”.

These statements strengthen the suspicions of his family members, who believe that Fırat Şişman might actually be being questioned and interrogated right now, which carries with it the risk of him being tortured.

“The family continues its search through us as their legal representatives. So we have met with the prosecutor to learn the fate of Fırat Şişman. We could only see the prosecutor once. The prosecutor told us that there was no detention warrant, that he [Fırat Şişman] was heavily wounded and his health was at a ‘life-critical level’ for about a week after he was captured. We were informed that there was no questioning or testimony taking process,” said Hüseyin Türe, one of the lawyers representing the Şişman family. 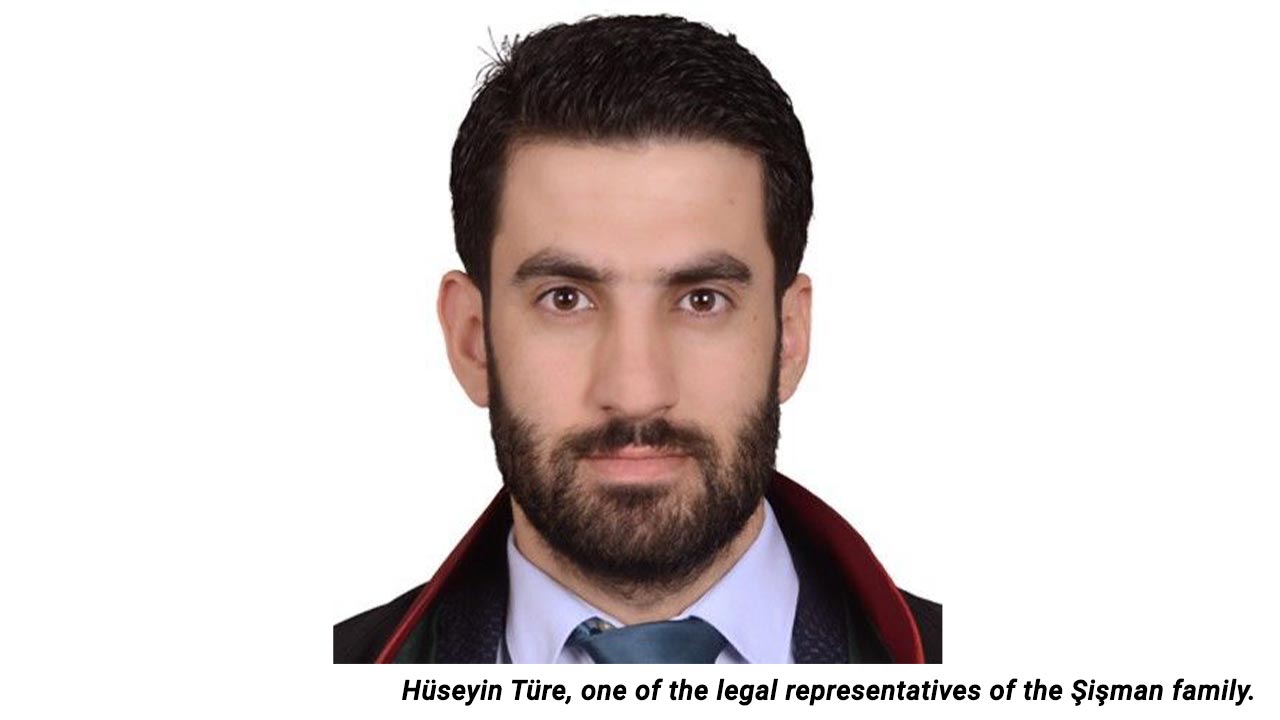 When asked upon what legal basis the authorities had grounded their rejection, Türe responded: “They said Fırat Şişman signed documents demanding his family and lawyer not to be shared information. Based on these documents, they have prevented us, his lawyers from seeing him.”

“Let alone seeing him, they have not even shared any information about his whereabouts. We do not know where Fırat Şişman is held or in which hospital he has been treated.”

A colleague has searched through hospital databases, Türe noted, “but our colleague has not found any record of him in any state hospital despite the fact that the document they have sent the family states that Fırat Şişman was in Şırnak State Hospital.”

To summarise the situation: A document prepared by law enforcement handed over to the family reads: Fırat Şişman is in Şırnak State Hospital. On the other hand, lawyers cannot trace any record of Fırat Şişman in any state hospital. This contradiction reflects the insecure status and position Fırat Şişman is in.

For a cautionary judgment regarding the “violation of the right to live” and the “violation of the ban on torture”, lawyers of the Şişman family filed on 11 May an individual application to the Constitutional Court on behalf of his family. To date, the Court has ruled no decision in the matter.

“Such a de facto detention has no place in the law. If you detain someone without a detention warrant, you actually are committing a crime. Now, a crime is being committed. This is similar to what was happening during the 1990s, but considering today’s circumstances, it is so worrying that such incidents still occur.”

Officially, Fırat Şişman is not “detained” but is “being medically treated”. Fırat Şişman’s “questioning” under such circumstances – that involve him being held by the state authorities in a place ‘unknown’ under the guise of “treatment” – therefore, is not legal and is banned strictly by the laws; but practically, this might be happening at this very moment, constituting a serious violation of human rights and Turkey’s own laws.

The family lawyer clarifies their three priority demands from the Turkish authorities: “First of all, to learn where Fırat Şişman is; secondly, information about the medical treatment he has been receiving to ease the worries regarding his health and thirdly, his lawyers and family need to be able to see him.”

Şişman’s family was actually one of those tens of thousands of Kurdish families who were forcibly displaced from their villages in Turkey’s eastern province of Bitlis (Bedlis) during the 1990s. The family ‘migrated’ to Istanbul in 1992 when their village was burned down by state forces and thirteen people were killed in their village by what are referred to, even today, as “unsolved murders”.

Fırat Şişman left Istanbul to go the mountains right after they ‘migrated’. Mesut Şişman was young back then. “I have never seen my brother for 25-26 years since he was gone. I do not really remember him, but I believe he left because of his emotional bond to our village after those incidents happened,” he said. 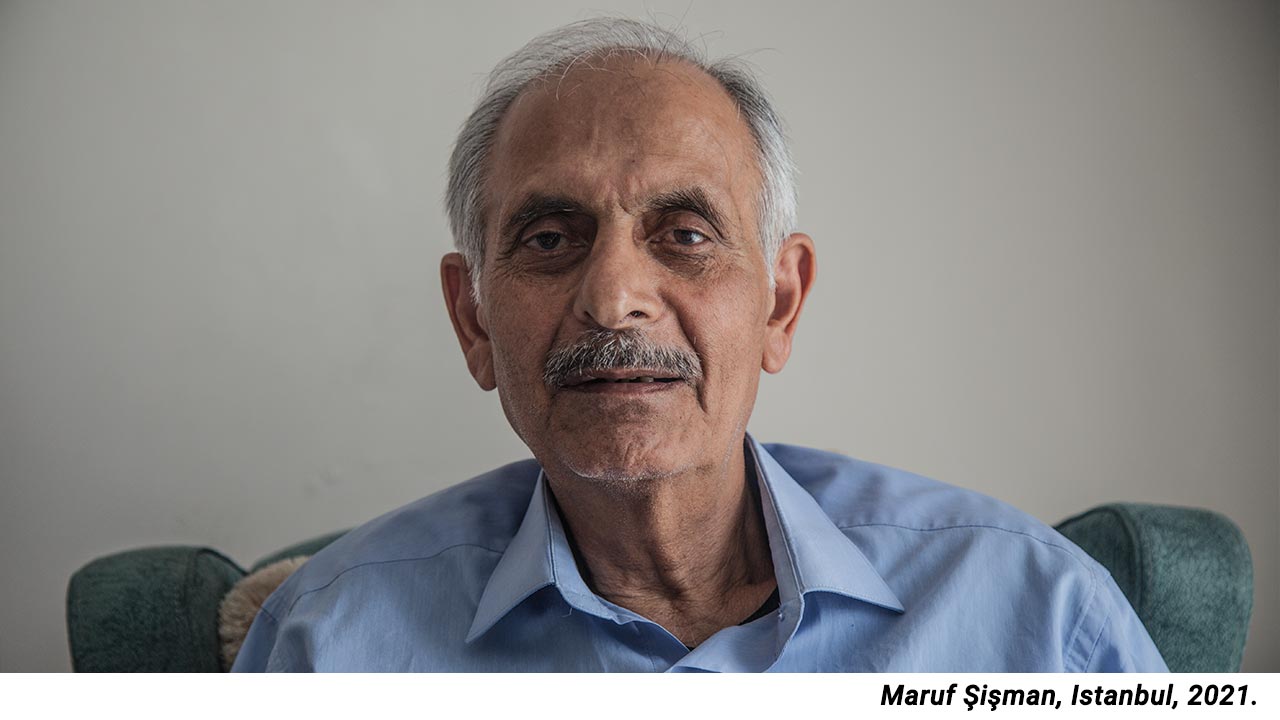 “We want peace, brotherhood and equality. We want cruelty and harassment to be left aside. The state should listen to the voice of its own peoples and peace should be ensured.” 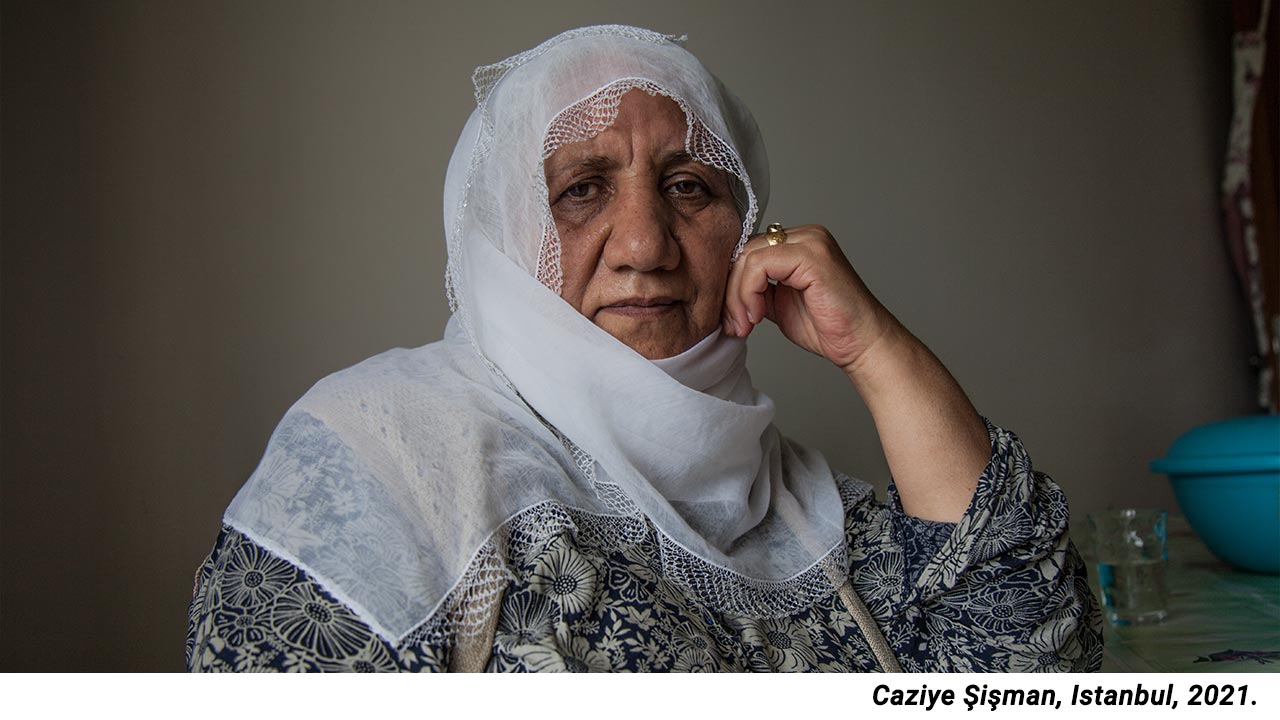 The last words in this interview are especially reserved for Caziye Şişman, mother of the currently disappeared Kurdish fighter. Mother Caziye’s eyes were filled with tears each time she was trying to talk about Fırat Şişman. Witnessing her suffering and yet trying to record at least a couple of sentences from her was not an easy, but a necessary task, because eventually Kurdish mothers are the ones who suffer most from the ongoing war and whom are most disregarded by the media in Turkey.

She has been missing her son since he left home, carving a “pain in her chest” as she described it, but now knowing that he has been held by the state and yet hearing no information from the Turkish authorities has turned her longing into a process of sheer torment.

“My son is in the hands of the state. They say nothing to us about him. We have no idea whether he is wounded, alive or dead. They do not say anything to us,” she said. “If a lawyer of his could go and see him, that would be good. We want to see him. We want information about him shared with us. Is he wounded, is he alive?”

Peshmerga commander Wahap Sertip: ‘How can it be legitimate to disregard the PKK, a revolutionary Kurdish movement?’

A tradition of resistance in Turkey from 1982 to 2021: Political prisoners and activists demand their rights with ‘hunger strikes’

Lahor Şêx Cengî: ‘We will never be involved in a war between Kurds’

Peshmerga commander Wahap Sertip: ‘How can it be legitimate to disregard the PKK, a revolutionary Kurdish movement?’

The status of ‘Bashûr’ the South

Daughter of peshmerga threatened for opposing war between Kurds